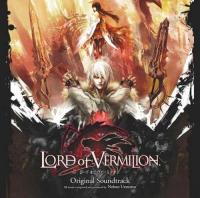 Lord of Vermilion was Nobuo Uematsu's first solo score for Square Enix in half a decade. The game itself was nevertheless very unique for the company given it was created for Arcades and focused on card battling. Uematsu used the project as an opportunity to reflect his rocking side more than ever before. However, rather than reunite with The Black Mages, he chose to recruit independent artists such as arranger Kimio Itoyama and a few performers to bring his compositions to life. The resulting score has a distinct retro feel in its melodic treatment and synthesis yet is also very ambitious in its stylistic and emotional scope. Uematsu's record label Dog Ear Records released the results in a one disc complete soundtrack....

"Dawn of Vermilion ~Opening Theme~" does an excellent job exposing the style, tone, and thematic material of the soundtrack. Dominated by wailing guitars and ringing bells, the first 50 seconds of the theme are especially moody and declare an epic is about to unfold. It abruptly transitions into a fast-paced electric guitar rendition of the main melody. The melody itself is reminiscent of Nobuo Uematsu's old-school works and enhanced by a reverberating performance by Kimio Itoyama. There are a few twists and turns along the way, particularly the emotional interlude at, but the coda returns straight to the main melody in an even more rocking rendition than before. While the melody is a little simple and unmemorable, the amount of emotion and intricacy offered by the arrangement makes this one of Uematsu's best in a while.

The repetition of the main theme throughout the soundtrack is a mixed blessing. It certainly brings quite a lot of coherency to the score and maintains the atmospheric rock feel, though the integration doesn't always seem to work. On the one hand, it's quite charming how the theme is referenced with the opening riff of "Eternal Night of Capital Elm" and a few other tracks that would sound complete even without the theme. At other times, however, the appearances are unwelcome, particularly the bombastic interpretation in "Name Entry" right after the opening theme. Even more commonly, the theme can be used in a straightforward and uninspiring way as the focal point of certain setting themes. Most notably, it headlines "Meranji Sand Dune", "Spiege Snow Plains", and "Bairu Mountain Range". The repetition of the melody adds thematic cohesiveness and the tracks have sufficiently interesting elements otherwise to appeal and fit their contexts; however, the core and introduction of these themes often seem distantly related.

Although all tracks feature rock elements, there is quite a bit of diversity in the soundtrack. "Combat Preparation", for example, is a dramatic blend of militaristic and rock features with some especially commanding chord progressions. As with a lot of Uematsu's recent works, there are a few references to his Final Fantasy creations, this time Final Fantasy VIII's "SeeD" and "The Stage is Set". Meanwhile "Renaaru Forest" sets the feeling of wandering through a forest in an atmospheric way using disorientating tuned percussion figures and ethereal vocal chants while "Pajya Maze" takes the dark mood up a notch with ambient suspended notes and glassy percussion. Others have a distinctly malevolent tone to them. "Tyrant's Palace" verges on being heavy metal with its abrasive rhythm guitar riffs and extensive distortion. Meanwhile, the final boss theme "Enemy Rival" is one of Uematsu's most powerful to date, blending imposing organ and guitar work in the introduction with more melodic and flashy sections during the lengthy development.

At its heart, Lord of Vermilion was created to be a very emotional score. There are a lot of feel-good moments on the soundtrack, particularly wherever electric guitar leads are concerned; in particular, the late entrances of Kimio Itoyama's guitar solos on the hard rock themes "Eternal Night of Capital Elm" and "Wiara Volcano" are some of the finest points in the soundtrack. Later in the soundtrack, a new melody is also introduced and it is perhaps the best figure in the whole soundtrack. It makes breathtaking appearances on the "City Church Arbiter", "Abandoned Castle Rukusaria", and "Ruined Kingdom Guura" themes before appearing in the furious but amazing final dungeon theme in "Black Dragon's Temple". The game ends with a vocal rendition of the main theme, "Lord of Vermilion". While the melody doesn't really suit the balladic approach, the vocals are well done and the instrumentals gradually become more elaborate. The album ends with a series of moderate length fanfares, most notably "Win" and "Lose", and an instrumental version of the ending theme.

Overall, the Lord of Vermilion Original Soundtrack is an enjoyable musical accomplishment from an unlikely source. Nobuo Uematsu and Kimio Itoyama really pulled out all the stops on this one to create a very atmospheric yet adaptive rock style; the melodies are solid, the pieces are comprehensively developed, there is plenty of diversity, and some parts of the soundtrack are so emotional. The only aspects that let it down are a slight overreliance on the main theme and the electric guitar as a lead instrument. Anyone who has enjoyed Uematsu's rock themes in the past, whether hard-edged or atmospheric, should fine themselves loving Lord of Vermilion's soundtrack. So do Dog Ear Records a favour and check it out.

По материалам www.squareenixmusic.com....
Показать
03.06.2008    1671
Album was composed by Нобуо Уэмацу and was released on January 01, 2009. Soundtrack consists of 22 tracks tracks with duration over . Album was released by Dog Ear Records.

Sounds like Ambient, Ethnic, Rock - that's what we can say about this album. 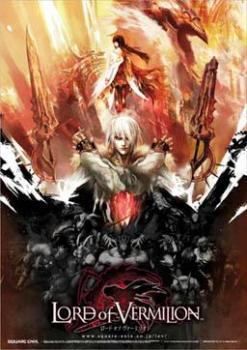