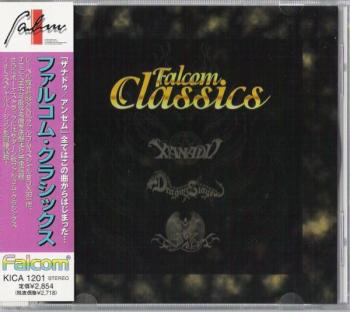 By 1997, Falcom's classic era had come to an end. The company were no longer selling thousands of games, producing hundreds of albums, or even working on any original projects. However, it wasn't the end and they instead used the time as an opportunity to commemorate and monopolise further on their classics. They released a Saturn compilation entitled Falcom Classics and an accompanying album release, featuring a mixture of arrangements from the company's history and several exclusive compositions. Let's take a closer look.

The majority of the album compiles diverse arrangements of classic Falcom games. The opener "Xanadu" is an original image song by '80s rockers Anthem, though is a little too tame for my tastes. On the vocal arena, "Go Fight" is considerably more enjoyable and highlights the J.D.K. Band when they're at their lyrical best. There is plenty of rock elsewhere on the album, ranging from the surprisingly charismatic interpretation of "Karl Cares" from Brandish 2 to the jazz fusion interpretation of "Star Trader", and feature plenty of Falcom's flair.

There are also some acoustic additions taken from The Very Best of Ys. There is a beautiful piano adaptation of "Palace" that demonstrates the relative beauty of Michio Fujisawa's PrePrimer arrangements. In addition, there is an expansive orchestral performance of "Lilia" from Falcom Neo Classic, featuring the London Symphony Orchestra. In the biggest stinker of the album, the J.D.K. Dulk Factory make an appearance with their irritating and cheesy 'techno-meets-rap' medley from Provincialism Ys.

Falcom Classics also features several original pieces created for the Saturn's Falcom Classics. "Game Select" is surprisingly beautiful and majestic for a menu theme, while "Total Ending" offers a beautiful blend of organic instruments. There are also three tracks specially composed for the once-silent Dragon Slayer, namely the cinematically evolving "Opening", the adventurous yet wistful "Field", and the elating and brassy "Ending". Though none have gone on to become classics in their own right, they work wonderfully in the game and are very enjoyable here too.

Falcom Classics serves as a potentially useful introduction to Falcom's discography. However, there are only nine arrangements featured here, including one extended stinker, and many have been replicated in other compilation albums. The biggest original appeal are the five new tracks from the Saturn game, but even these aren't really enough to warrant a purchase. While its contents are respectable, this album can safely be skipped.