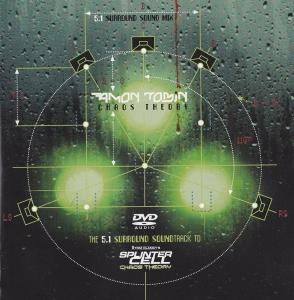 Amon Tobin is, without a doubt, one of the best electronica artists in existence. By fusing jazz, hip-hop, drum 'n bass and his native Brazilian influence, he creates unique soundscapes with a lot of rhythmic flavor and experimentation, managing to push the boundaries of music each time he tries something new. Tobin has a more-than-impressive discography behind his back, like the mind-blowing Permutation or the jazzy and psychedelic Bricolage, but his works were starting to sound slightly similar, despite his craft never fading. Luckily for Tobin, Ubisoft contracted him to score the soundtrack for Splinter Cell: Chaos Theory, marking his first video game debut, and giving him the chance to experiment in many innovative ways. The final result was one of the best and most context effective soundtracks that were ever produced. Not only that, Tobin also gathered a very talented group of musicians for the sampling of the instruments (including mellotrons, flutes, and other mostly-acoustic varieties) achieving some top-notch production qualities.

Despite his experimentation and originality, this is still an Amon Tobin album at its core. Most of the album is a potent mash of intense breakbeats and atmospheric sound effects, creating a sonic contrast of ambience and rhythm. The music definitely sounds very nocturnal, with some cinematic flair thrown in. Perfect examples of this are the heart-pumping opener "The Lighthouse", the unique and atmospheric "Theme from Battery", or the eerie "Kokubo Sosho Stealth". All of the tracks inspire imagery of dark, night-time environments, fitting for the setting and stealth elements of the game.

Other notable mentions include "The Clean Up", which adds some ethnic Asian elements into the mix of intense drum 'n bass and strings, or "Displaced" and "Ruthless" with their incredibly cinematic, tense, and fast-paced electronica. In addition to offering an engaging accompaniment to the gameplay, these tracks have the length and substance of music featured in Tobin's original albums, ensuring a fulfilling stand-alone listen. In fact, one track — the frenetic "Kokubo Sosho Battle" — is directly adapted from one of Tobin's original albums.

Technically speaking, each track has three different levels of intensity corresponding with the degree of danger during the missions: the calm sections for exploration, the more tense ones when danger is approaching, and lastly the action-fueled segments when enemies are alarmed. The evolution of "The Lighthouse" with increasingly complex breakbeats and hybridised forcese is an excellent example. Still, the album is mixed and produced in such a way were everything flows cohesively and feels like a whole, so this album is more than just a "soundtrack".

Note that there are technically two versions of this soundtrack. In addition to the regular ten track edition, a DVD soundtrack is also available featuring a range of additions. Audiophiles will enjoy hearing Tobin's compositions from the soundtrack in 5.1 surround sound, which the experience all the more immersive and dramatic. Furthermore, this version features bonus promotional videos and a fascinating bonus track, "Stolen", blending Middle Eastern percussion and vocals with Tobin's characteristic electronic sampling.

Ultimately, Chaos Theory is one of the most effective in-context soundtracks to ever grace a video game, bringing intensity and interactivity to the main gameplay while complementing Jesper Kyd's score for the cinematics. Despite that being more than enough, the album also surprises by being a magnificent accomplishment of electronic music, mixing ambient soundscapes and electronic beats in a rare and unique way. It's a must-listen for everyone, whether game music fans or Amon Tobin followers. Although it can be difficult to taste for some, as it requires understanding and appreciation of the genre, and in particular of Tobin's style, anyone who is willing to be adventurous is in for an out-of-this-world trip. Definitely, one of Tobin's most memorable efforts, if slightly less accomplished than his debut main albums, which is still saying a lot. Those owning a surround sound system should definitely seek out this version as opposed to the regular edition.