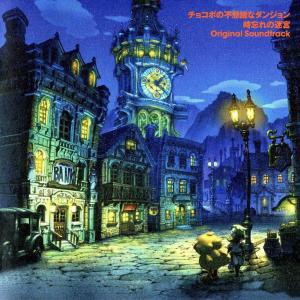 The soundtrack to the Wii's Final Fantasy Fables: Chocobo Tales (aka Chocobo's Mysterious Dungeon: Labyrinth of Forgotten Time) challenges most preconceptions one might have of the Chocobo series' music. It mostly features arrangements from across the Final Fantasy series to accompany various game sequences. Given the abundance of high-quality Final Fantasy arranged CDs, the team behind the soundtrack had a tough time making sure it stood out. Yuzo Takahashi's arrangements adhere closely to the originals but enhance them in various ways, forming a comfortable middle ground between the outrageous Chocobo Racing and the orthodox Final Fantasy Fables: Chocobo Tales. In addition to the selection of arrangements featured in the game, the soundtrack offers three original compositions from Kumi Tanioka and Ai Yamashita, including a vocal theme. As a sidenote, as the game might not be released overseas and many will treat this as an arranged album rather than true soundtrack, I'll be referring to the original Final Fantasy track titles for arrangements, not the titles created specifically for this CD. Time to take a closer look.

The soundtrack opts to cater for the Final Fantasy music aficionado rather than a mainstream audience with track listings featuring many unusual choices. Who would have ever thought that we'd see an arrangement of the beautifully understated "Epitaph", played once in FFVI 13 years ago? And what about the neglected "Fate in Haze", the haunting and impressionistic dungeon theme of FFV? There isn't a rendition of the bittersweet "One Winged Angel" or "Aerith's Theme" in sight. Instead of the hundredth version of the Moogle theme, we get the equally quirky "Theme of the Four Old Men" from FFIII instead. Rather than FFVII's "Prelude", we get FFXI's stripped down version instead. There isn't even a true Chocobo arrangement featured among the gameplay tracks! It is quickly apparent that this soundtrack is diverse in more than just track listings. FFIX's "Hunter's Chance" and FFIV's "The Big Whale" are raw and brassy in their high-octane remixes, FFI's "City Theme" and FFII's "Battle 1" integrate chip tunes in tributes to times of ol', while FFIV's "Rydia" and FFV's "My Home, Sweet Home" are light and ethereal in their acoustic renditions. Outside the realms of Uematsu, FFX's "Thunder Plains" is given a soothing minimalistic tuned percussion interpretation, FFXI's "Tarutaru Male" nicely emphasises the interplay of the primary and secondary melodies, and FFX's "Summoned Beast Battle" remains as impacting as the original despite some loss of coherency.

The game's protagonist might be cute but this doesn't stop the soundtrack from often being intense and action-packed. FFVI's "The Fierce Battle" is perhaps the most aggressive Final Fantasy arrangement I've heard; its Phantom of the Opera-esque motifs throb and stab more than ever and its accompaniment is utterly thunderous. FFVIII's "Force Your Way" delights with a phenomenally paced rock-techno combo while FFV's "Battle with Gilgamesh" often resembles a dazzling piano concertino through its expert treatment. FFIV's "The Dreadful Fight" and FFIII's "Battle 2" are brass- and timpani-dominated orchestral arrangements that shine thanks to the quality of the original material. Though FFVIII's "Only a Plank Between One and Perdition" could have been improved further, there is strong rhythmical impetus throughout and the use of a distorted guitar in the second iteration of the melody was an excellent choice. The soundtrack also does justice to two of the most marvellous but lesser-known final battle themes of the series — FFV's "The Decisive Battle" is given the bold orchestral arrangement I've longed dreamed of and FFXI's "Awakening" is a welcome enhancement of the original.

The synthesizer operating by Square Enix newcomer Mitsuto Suzuki almost always improves upon the originals. There is impressive clarity and excellent articulation in most of the samples employed. I was especially impressed with the implementation of electronic beats and vocorder samples in FFVIII's "The Man with the Machine Gun"; they give a new layer of dynamism to an already energetic piece. Unfortunately, the lead string and woodwind samples aren't always as good. For example, the 'new age' samples featured in the first minute of FFIX's "Over the Hill" are spot on but the subsequent lead flute use is too feeble to work with the more substantial accompaniment. The violin in FFV's "The Day Will Come" sounds artificial, screechy, and detached, turning a potentially emotional focal point into something rather unaesthetic. In fact, I'm pretty sure it is based on the sample that was used throughout the Kingdom Hearts II soundtrack. Another bothersome example is the clarinet that opens FFVII's "Farm Boy"; the lack of resonance here gives the unpleasant sound of a player using an overly hard reed that I'm all too familiar with through my experiences playing with some people in wind bands. Besides these few examples of acoustic leads, the synth greatly enhances most arrangements.

The soundtrack opens and closes with a few original themes. "Labyrinth of Forgotten Time" is one of Crystal Chronicles composer Kumi Tanioka's finest works; it develops gently from its tuned percussion rendition of the Chocobo theme into an oboe interpretation of the main theme of the soundtrack, strikingly orchestrated in its second iteration. Her other contribution, "Opening", employs a convincing dramatic arch, reaching its peak with a vigorous string-based Chocobo theme rendition and a fanfare-like version of the soundtrack's main theme. Rather than arrange the main theme once more to conclude the soundtrack, an economical resynthing Chocobo Racing's "The World's Tomorrow" is offered instead; the only complete rendition of the Chocobo theme on the soundtrack, Kenji Ito's sappy and obnoxious orchestration detracts from the original melody at least for me. The soundtrack ends with Ai Kawashima's light vocal piece "Door Crawl", more likely to grow on you than be an instant hit. The song definitely gets better following its insubstantial introduction and should eventually appeal to those with some inclination for J-Pop. Kawashima's youthful and airy voice is a select taste, but I feel she does a good job overall.

The soundtrack is not complete due to the decision to limit it to a one disc release. I think a lot of fans would have loved to have heard the arrangements of fans FFVII's "The Nightmare's Beginning", FFVIII's "Premonition", and FFIX's "Place of Memory". The others missed out are mostly among the lesser-known Final Fantasy themes, including FFIII's "Living Forest", FFV's "The Book of Sealings", FFVIII's "Fear", and FFIX's "Keeper of Time", presumably the source of fascinating arrangements. There were also a few more renditions of the Chocobo theme not included. As a completist, I find myself screaming for complete game rips already, but the decision to not use a second disc made financial sense. Arguably, it also makes the soundtrack a bit more digestible. The one disc release also means that some tracks aren't fully looped, but the arrangements usually feel well-established regardless, exceptions including FFVIII's "One Plank..." and FFV's "Sealed Away".

I'd recommend the Chocobo's Mysterious Dungeon Labyrinth of Forgotten Time Original Soundtrack to most Final Fantasy music aficionados. The diverse but familiar track listings are sure to inspire nostalgia and the combination of powerful arranging and fine synth make many tracks sound better than they've ever sounded before. The soundtrack's emotional spectrum is also impressive, encompassing quirky, calming, triumphant, haunting, and fantastical moments; however, be aware that many arrangements are bold and intense rather than full of gaiety so most will find their preconceptions about Chocobo music do not apply here. There are niggles — the feeble lead string and woodwind synth, the lack of development and originality in a few arrangements, and the uninspired ending themes — but these are minor. Probably foremost of your concerns should be whether it bothers you that the release is incomplete and omits some very interesting arrangements. For what it offers rather than lacks, the soundtrack is a very enjoyable overall experience.

The following tracks are arranges of mentioned tracks.