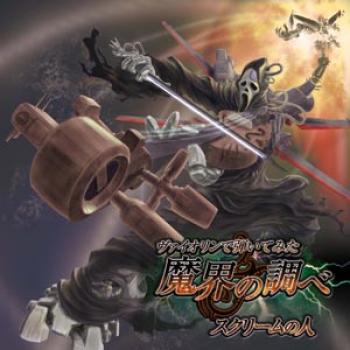 This short album is an arrangement album of various anime themes by prominent game music artists, namely Taihei Sato, Takayuki Aihara, and Norihiro Furukawa. It features a violinist who goes by the moniker Scream no Hito, who was discovered on Youtube. His style, as depicted by the cover art, is to dress up in a Scream costume while playing a variety of VGM tunes, such as "Vampire Killer" from Castlevania.

Takayuki Aihara arranges the opening theme from Genesis of Aquarion and "Uninstall" from Bokurano. His first arrangement, "Genesis of Aquarion," tastefully blends synth and pop elements with the violin. As one might surmise, the violin beautifully plays the original vocal melody with wondrous results. While there might not be any fancy solos, I don't necessary think it needs it. The other arrangement, "Uninstall," combines orchestral and pop elements to create another beautiful piece of music. As before, the violin showcases the vocal melody quite nicely, and there seems to be a short solo in there.

Taihei Sato also arranges two pieces, "Shangri-La" from Fafner of the Aure and "Sorairo Days" from Tengen Toppa Gurren Lagann. "Shangri-La" manages to tastefully blend some pop and rock elements quite nicely with the violin. It's a much faster paced piece than either of Aihara's and manages to throw in some jazzy elements as well through the piano. The melody is superb as well. The other, "Sorairo Days," is another fast paced piece that also blends together rock and violin. The melody is really engaging and while the piece doesn't have as much subtle hues as "Shangri-La," it manages to engage a bit more due to its energetic nature.

Lastly, Norihiro Furukawa arranges two pieces on the album. Both of his opt for the orchestral sound. The first, "Love Is..." from Toward the Terra is my favorite piece on the album. An arrangement of an arrangement of "Canon in D," it manages to melt my heart. The combination of the piano and violin are the true starts of the show and the original sections with the original Canon in D used as accompaniment is a brilliant idea and are my favorite sections of the piece. The drum pad is a bit cheesy and adds some pop flair, but I can forgive it. "Garnet" from The Girl Who Leapt Through Time is a beautiful piano and violin piece with some very nice orchestral backings. The melody is probably the most addictive of all the arrangements and it also features a very pensive and melancholy sound.

I mainly bought this album because Takayuki Aihara was featured as an arranger on it. Although I truly enjoy his arrangements, I find that Sato and Furukawa's arrangements are more entertaining. I also enjoy how each arranger took a different approach, from the slow orchestral arrangements of Furukawa, to the fast paced rock arrangements of Sato. Do yourself a favor. If you love violin and you love anime opening and ending songs, I highly suggest picking this up, especially if you can't stand the vocals in the original!