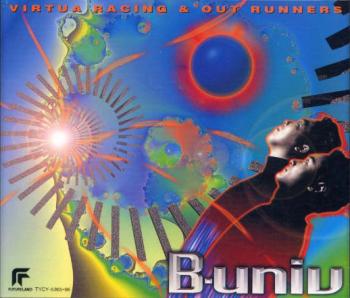 Virtua Racing & OutRunners is a three part album. There are the original scores for Takenobu Mitsuyoshi's Virtua Racing and the collaborative effort OutRunners on the second disc. On the first disc, there are arrangements of both scores by a few artists, including Sega's in-house jazz fusion group B-Univ composed of Koichi Namiki and Takenobu Mitsuyoshi. While none of the individual components quite justify a purchase, the collective whole likely provides enough to satisfy your musical needs. Time to look at each of the three sections.

Put simply, the original version of Virtua Racing doesn't have many highlights. The music for the game is used during the menus and passing through checkpoints, though there isn't any background music during the main gameplay. As a result, listeners are left with only a few modest highlights. The thematically continuous "Waiting Your Entry" and "Course Select" are enjoyable enough with their respective rock and new age emphasis. The reflective "Name Entry" and "Congratulations 2" are also nostalgic pieces at the end of the game, though they don't exceed a minute each. What might be described as filler themes on most soundtracks are actually the main highlights here. The rest of the soundtrack is a series of fanfares between ten to select lap used for the class, extend time, and best lap. Mitsuyoshi certainly has a flair for jingle writing, but most won't find them worthwhile listening to outside the game. This is the case for the rest of the score, in fact, which is best purely a contextual experience.

Fortunately, there are more highlights in the OutRunners soundtrack. For one, Takenobu Mitsuyoshi offers remixes of the classic OutRun stage themes featuring a bouncy old-school flavour. There are also several original racing themes. Takayuki Nakamura shows his flair for soft nu jazz soundscapes on "Blow Your Cool", creates a colourful big band theme on "Looking for the Rainbow", and offers some dynamic rock infusions on "Sonic Control". Mitsuyoshi also returns with the groovy jazz improvisation "Adventure". The rest of the soundtrack features 18 short stage themes for the various locations in the game. It's impressive how the individual locations are characterised, for example the country influence of Grand Canyon, the pentatonic melodies of China, or the new age soundscapes of Niagara, though the tracks are still little more than jingles. Even "Stage Final" is a pretty underwhelming and underdeveloped fusion. There are more highlights than the Virtua Racing soundtrack, but it's still pretty much a mixed bag.

The arranged version on disc one is definitely the highlight of the disc. It's really impressive how B-Univ managed to elaborate on the sparing original material of Virtua Racing's "Waiting Your Entry", "Beginner", and "Course Select" to create accomplished jazz fusion arrangements in "Polygonic Continent", "Stream", and "Center Run". These tracks all offer convincing instrumental interpretations of the melodies and extensive solos from various live performances. The game's score is also impressively remixed into a medley blending stage themes, electronic beats, and sound effects. As for the OutRunners arrangements, there are some twists on the conventional jazz fusion format with the evocative piano use on "France" and blaring big band brass on "Adventure". Even more experimental is "Sonic Control" with its eerie use of electronic distortion, modernist piano runs, and martial rhythms. Then again, not all will find it as awesome as me. As if an OutRun disc could exist without them, there are also jazz fusion interpretations of "Passing Breeze" and "Last Wave" plus a crazy raving remix of "Splash Wave".

This album is a tricky one to sum up. On the one hand, probably neither original version is worth getting on their own. The Virtua Racing soundtrack is basically a jingle collection while the OutRunners score features both highlights and filler. That said, the original scores might be more worthwhile when bundled together and they could bring back some memories for those who have played the game. The real swayer, however, is the arranged version. If you enjoy jazz fusion or B-Univ's other works, then this should be a worthwhile purchase. If not, there are only a few remixes outside that style. Overall, this album is a solid commemoration of two game scores, though it's a pity neither quite stand up on their own.