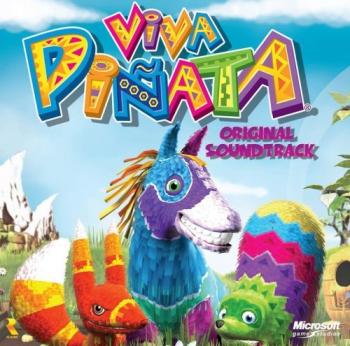 Beloved game composer Grant Kirkhope spent the majority of his later years at Rare scoring the life simulation titles Viva Piñata and Viva Piñata: Trouble in Paradise. Kirkhope took a classically-oriented approach to the scores — influenced particularly by English composers Vaughan-Williams and Elgar — and used a full orchestra to portray a serene yet colourful world. The resultant scores featured some of the composer's most exquisite and beautiful works, though were not initially commemorated with album releases. Last year, Sumthing Else Music Works changed that and released an album featuring 25 orchestral compositions taken from both of the titles. Was the wait worth it?

Viva Piñata: Trouble in Paradise's "Oven-Fresh Day" is particularly representative of Kirkhope's influences for the series. Much of the composition is reminiscent of Ralph Vaughan-Williams English Folk Song Suite with its serene woodwind melodies, folk dance rhythms, and interweaving lines. These elements give a charming image of an English country garden. However, there is also an expansive cinematic feel, leaving one to contemplate just how effective such a piece would be in a David Attenborough documentary. Kirkhope maintains this small ensemble approach throughout the two soundtracks, giving way to a highly cohesive album release. Nevertheless, he depicts specific settings in very intricate and individualised ways to offer a subtle diversity too. For example, "Snowy Blankets" and "Icicle Chorus" feature the contrasts of fragmented tuned percussion lines with rich string figures, in order to capture a winter setting in a nevertheless conserved world. Meanwhile barren double reed instruments are a dominant feature of the equally fitting "Sunrise Whisper" and "Secrets in the Sand", both of which have a slight middle Eastern influence. Evidently, Kirkhope's music is the ideal accompaniment to the island featured on the games.

The City of Prague Philharmonic Orchestra feature throughout the entire soundtrack release and greatly enhance the experience. Orchestrator and conductor Nic Raine ensures that Grant Kirkhope's compositions are wonderfully adapted for the ensemble and always brings out the underlying lyricism and personality of the composer's melodies by using simple yet refined techniques. "All in a Day's Work" is a particularly impressive example of what the orchestra brought to the original Viva Piñata score. When analysed superficially, it is little more than a succession of solo woodwind phrases above uplifting pizzicato string figures. Yet Kirkhope and Raine ensure that each phrase is presented with a new instrument — from inquisitive bassoon at the introduction to serene flute at the conclusion — to offer more variety. Each phrase brings a lot of character and colour to the piece, both due to the innate timbral qualities of the instruments and the expressive nuances offered by the solo performers. While the development is extensive, the composition nevertheless stays true to its humble routes with the continual use of sparse yet playful accompaniment figures. The result couldn't be more fitting for representing the ensemble animal cast of Viva Piñata in a vast landscape.

Several tracks on the soundtrack release are particularly special ones. Viva Piñata's "Tranquil Hours" is widely regarded as one of Kirkhope's finest works to date. It tugs at the heartstrings with the falling piano motifs and radiant strings at the introduction. As more elements enter, the composition takes several interesting turns — reaching a gushing romantic peak before transforming into an enigmatic fantasy orchestration during its final minute. It's incredible how the composition explores and evokes so much during its short playtime before fading back to nothingness. Many of the entries in the Viva Piñata: Trouble in Paradise contain an even more nostalgic and bittersweet feel to them. "Bedtime Story" is perhaps Kirkhope's most personal contribution on the album and has the potential to be very affecting. Incidentally the last piece recorded with Rare, it's not surprising that he burst into tears while recording it. It is nevertheless actually Viva Piñata's "Tomorrow Wonders" that leads out the album release and again listeners are left with something of an enigma. How can a composition simultaneously be gorgeous, calming, uplifting, and yet also somewhat sad? Grant Kirkhope is evidently able to invoke so many subtle emotions into each and every one of the phrases when using an orchestra.

The Viva Piñata and Viva Piñata: Trouble in Paradise soundtracks are delightful additions to game music history. In an industry where simulation scores usually take tacky synth approaches and symphonic scores tend to be reserved for grand cinematic works, it's wonderful that Kirkhope was inspired to take a more progressive approach on these games and was offered the opportunity to record with full orchestra. Though of limited scope, the Viva Piñata Original Soundtrack features Kirkhope's finest contributions to each game and prove not only functionally effective, but also inspiring out of context. It is highly recommended for those looking for beautiful and memorable classical music.