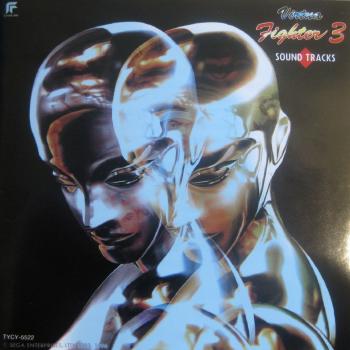 In 1996, Sega AM2 continued their hit fighting series with Virtua Fighter 3 for the Arcade. Though it largely maintained the same roster of characters, the game was a launch title for Sega's Arcade Board Model 3, enabling major enhancements in gameplay, graphics, and audio. Sound director Takenobu Mitsuyoshi maintained the principles of the series' music, but took the opportunity to make the tracks more elaborate and refined. The results were released in a fairly wholesome album...

Much of the Virtua Fighter 3 soundtrack refines elements featured in earlier soundtracks in the series. "Keen Head", for instance, continues the series' tradition of offering instrumental rock themes and fits the character of Jacky well. This time, however, the composition is more elaborate and the implementation is better, especially the guitar synth. That said, the reliance on rock organ solos during the development does give the track a dated feel, despite its advances. There are also upbeat synth jazz tracks such as "Underground" and "Tedium" that are similar to those from the original Virtua Fighter. This time, however, they're much more punchy and memorable.

Virtua Fighter 3 featured the most diverse of the series' soundtracks at the time of its release. In addition to a range of rock, jazz, and electro tracks, there are tropical excursions such as Jeffry's percussive "Coral Groove" and oriental affairs such as Aoi's "Dance". They have quite an authentic feel through a combination of fitting composition and implementation. That said, they lack the energy needed to really motivate in context and leave listeners feeling a little alienated outside it. "Drunkman in Hong Kong" uses some classic pentatonic motifs, but again, it's just a little repetitive.

Despite its deficiencies, the soundtrack is quite a bit more fleshed out than earlier Virtua Fighter soundtracks. It is particularly fulfilling at the climax with its dangerous yet mesmerising blend of rock and techno features to represent the final boss Dural. At the end of the album are a range of mostly light-hearted tracks used for extra stages, all of which have pleasant grooves and soundscapes. "Blandish Fist" has become a particular favourite of mine with its deliciously cheesy synth lead. Tracks like "Stage Clear" or "To Try the Next Level" aren't exactly necessary, but ensure fans receive the whole soundtrack nevertheless.

One final criticism needs to be made about the soundtrack. Most stage themes on the album are peppered with voice acting and sound effects. The vocals at the start of each track bring listeners back to the Arcade, but aren't exactly welcome. I'd rather be at the Arcade than at my apartment listening to someone say "Ha! Think you can win at that level?" and other similar motivating quotes before each track. It's almost as if the album producers decided to try to spice up the spice-lacking music, but it wasn't needed given those who purchase soundtrack releases expect the music to be uninterrupted.

The Virtua Fighter 3 soundtrack was written during Sega's transition between eras. As a result, it is a strange mix of old and new in terms of both stylings and samplers. The soundtrack certainly has more definition and diversity than its predecessors, but ultimately lacks the refinement and maturity of its successors. While far from the best album in the series, it is a respectable one that is well worth listening to.

SPECIAL THANKS TO 81 Produce
VirtuaFighter 3 Team
Hidenori Syoji
Album was composed by Fumio Ito / SEGA Sound Team / Такэнобу Мицуёси and was released on October 23, 1996. Soundtrack consists of 30 tracks tracks with duration over about 55 minutes. Album was released by Futureland.