Virtua Fighter 3 On The Vocal 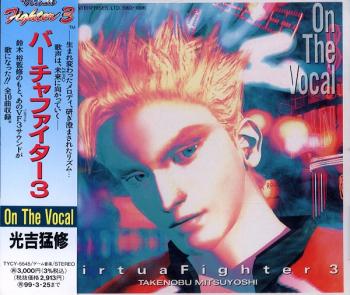 Virtua Fighter 3 On The Vocal
Front

Following the disastrous Virtua Fighter 2 Dancing Shadows, Virtua Fighter 3 On The Vocal corrects a lot of wrongs and really lets Takenobu Mitsuyoshi shine again. There's a roughly even divide between anthems and ballads in the album that follows, as well as a few experimental anomalies.

Virtua Fighter 3 On The Vocal redeems many of the mistakes of Virtua Fighter 2 Dancing Shadows: the arrangements are based on Virtua Fighter 3's stage themes, all the tracks are sung by Takenobu Mitsuyoshi, and the arrangements are generally a little more refined. The opening track "Heat Haze" is instantly promising, for instance. Kage's theme provides the source of a strong melody that Takenobu Mitsuyoshi bellows out with suitable strength. Kaoru Ohori's arrangement is quite straightforward rock, but features a nice amount of variety and gives an opportunity for both vocals and guitar to shine.

Another welcome feature of the album is its diversity. The album certainly isn't multifaceted as Virtua Fighter Image Album Neo Rising, but there is a fair amount of novelty throughout. Some tracks are highly extravagant, such as "Zero" are highly extravagant with disco beats and flashy solos, or "The Wall" and "Brave It Out" with their punchy progressions and anthemic chorus. Others' are soft and restrained such as the balladic "Alone", reflecting a deeper quality to the characters of the game while providing the album with some respite.

It is sometimes quite impressive what the arranger achieves with the original material. For example, she converts the peppy synth line of Sarah's theme into a multitiered track on "Mysterious"; it transitions from a beautiful synth piano introduction into an upbeat dance piece before introducing a flashy electric guitar solo. The interplay between Takenobu Mitsuyoshi and the chorus section is also well done and maintains a constant dynamic to the track. The album ends on a cheesy but emotional note with the passionate vocal passages and guitar solos on "My Lover".

Virtua Fighter 3 On The Vocal is an above average vocal album for game music. It's clear that the producers had learned from the mistakes of its predecessors and, while it rarely attains the realms of the spectacular, it is usually memorable and emotional. It also provides an interesting perspective on the characters and their themes from the game.

Lyrics:
Minako Aoyagi (2, 9)
Album was composed by Fumio Ito / Такэнобу Мицуёси and was released on March 26, 1997. Soundtrack consists of 10 tracks tracks with duration over about 45 minutes. Album was released by Futureland.