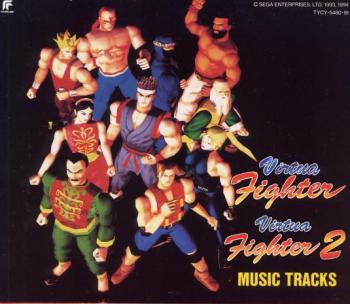 In 1994 and 1995, Sega made an impact in the fighting game scene with their releases of Virtua Fighter and Virtua Fighter 2 for Arcades. The games were soon ported to several consoles, most notably the failed Saturn, with some enhancements. The Virtua Fighter 1 & 2 Music Tracks is a compilation of the scores for the two games in both their Arcade and Saturn versions.

The first disc of the album is dedicated to the Arcade versions of Virtua Fighter and Virtua Fighter 2. The Virtua Fighter score is largely a light-hearted one, as reflected principally by the character themes. "Jacky", for instance, is a fairly upbeat and carefree with a slight funk vibe. It's quite catchy, though more because of the extent of the repetition of the focal motifs, rather than the melody itself being particularly special. Indeed, those expecting a rich expansive melody on par with Street Fighter II or a deep psychological exploration similar to Tekken 2 will be disappointed. Beyond the melody, the composition is pretty straightforward and shows the effects of time in terms of its synth. It's pretty memorable and effective, but not exactly a classic.

In contrast, the majority of the music of the Virtua Fighter 2 soundtrack is rock-oriented. This is evident straight from the first stage theme featured "Man of the Fist". The music is typical Japanese instrumental rock music — highly energetic thanks to a combination of thrashing riffs and bright melodies. This certainly adds more vibrancy to the gameplay and makes the experience somewhat more immersive. There are even some guitar solos added in, which is quite exceptional at a time dominated by linear 'verse and chorus' tracks. That said, the rock focus of the soundtrack can be a bit one-dimensional and tracks such as "Virtua Fighter 2", "Song of Sorrow" or "Escape" are more run-of-the-mill fighter style with a repeating guitar riff over and over. They're not particularly intrusive in the game, but become repetitive and boring when listening to the album alone.

An attractive feature of the soundtracks is how each character has a different styled theme. This makes for more diverse soundtracks that reflects a diverse cast of characters. In Virtua Fighter, there are alley-style fighting tunes like "Jeffry" paired alongside more frivolous feminine tracks such as "Sarah". In addition, there are also those inspired by traditional world music, such as "Pai" with its wailing vocals and pentatonic scales, though it is admittedly a blatant rip-off of Chun-Li's theme. The Virtua Fighter 2 soundtrack is less diverse, but there are still interesting moments. "Star from Hong Kong" and "Mountain Hermit Shun Di", for instance, integrate ancient flutes and percussion to give a unique Asian touch. Such additions stop the pieces from being complete guitar noise like many of the other character themes. The energetic and catchy rock organ use in "Black Cat Moon" is also quite refreshing.

The second disc is dedicated to the Saturn versions of Virtua Fighter and Virtua Fighter 2. There are relatively few changes in these soundtracks compared to their originals, potentially reducing the value-for-money of this compilation. All of the tracks have been resynthed by Takenobu Mitsuyoshi to achieve a fuller, finer sound, though still leave quite a bit to be desired. There are instances where Mitsuyoshi has elaborated on the originals, but this is not always advantageous. For example, the high-pitched synthesizer solo in "Akira" in the Virtua Fighter port is quite annoying and dominates too much of the track, though admittedly the ending theme is quite cute with its vocals. The ported version of Virtua Fighter 2 might be of greater value, since it is exclusive to this compilation and helps the rock elements to come across more clearly.

Overall, the music of Virtua Fighter and Virtua Fighter 2 is essentially enjoyable and effective. However, it is not quite on par with fighting soundtracks being released by Capcom, SNK, and Namco at the time, mainly because of its highly derivative qualities. This compilation will consolidate several purchases into one, so it is worthwhile for those wishing to revisit the games' music, despite its limitations.