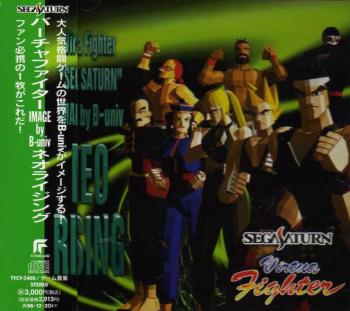 Following the commercial success of Virtua Fighter, Sega decided to capitalise on the product in various ways. One way was through its music. Aware of the success of his Daytona USA score, they allowed sound director Takenobu Mitsuyoshi to produce a vocal arranged album for Virtua Fighter, performed by B-Univ and sung entirely by himself. The concept of the album is arguably a strange one, but the results are actually quite impressive...

The soundtrack opens with "Virtua Fighter ~ You Are the Master", a rearrangement of the remix of the same name from the Virtua Fighter album. Whereas the original was brash and anthemic, this new rendition is considerably more laid-back, with soothing vocals and saxophone solos. It still maintains some of the charm and hilarity of the original, but isn't quite as enjoyable overall. Nevertheless, it works quite well as an introduction to the album...

A number of other compositions on the album also take a softer approach and are best described as ballads. While Takenobu Mitsuyoshi is mostly known for creating screwball entertainment, his voice can sometimes work in more romantic songs too. Mitsuyoshi brings new depth to Wolf's theme with his soulful rendition here, while "The Moon is the White Gate's Light" is a fairly mature acoustic number. Special praise must be given to the instrumental arrangers and performers who ensure particularly rich moments during these songs.

Nevertheless, those expecting upbeat anthems from Takenobu Mitsuyoshi won't be disappointed either. "Winner Takes All" is a premiere example of such a tune with its upbeat 80s-style instrumentals and stupid yet motivating lyrics. It's Mitsuyoshi cheese at its finest. "My Shadow" is considerably harder, though still light-hearted, and features some awesome guitar solos between the blues-influenced vocal passages. It's wonderful to hear Virtua Fighter's character themes treated in such unexpected ways.

The album also features two fantastic instrumental tracks. "Ocean Crystal Ship" has a progressive rock tone and features fascinating interplay between Chinese fiddles and Western keyboards. "Wounds by Design" meanwhile provides a slow interlude before the conclusion and is gorgeously soundscaped. There are also karaoke renditions of all the vocal tracks at the end of the album, though most unsurprisingly sound quite barren without the voices.

It's impressive that Mitsuyoshi produced a relatively mature album here. Away from his silly Daytona USA tracks, it's clear he is capable of quite a bit more dramatic and stylistic range. Mitsuyoshi's vocals won't appeal to all and the instrumentals might appear a bit dated all these years on. Nevertheless, this album is undeniably creative, and potentially very emotional and endearing too.

Virtua Fighter "You are the Master"

The Moon is the White Gate's Light