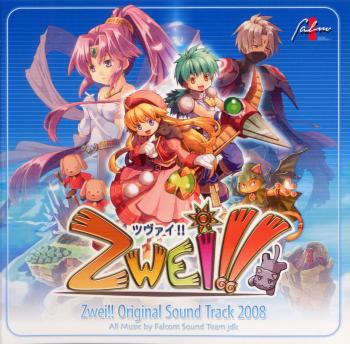 This album came out of nowhere for me. I had lost touch with the series and never knew Falcom was making a PSP remake of the first game in the series. What shocked me even more was the fact that they totally arranged the masterpiece of a soundtrack the first game had, making it more modern and updated for the next generation handheld. No new tracks were added, but some were changed so drastically that they might as well be new. How did it hold up as a whole? I could go on for hours about it. If you want my analysis of the album as it fits to the game, you can check out my review for that album. Here I will focus solely on the differences between the two.

Starting with the most influential changes, the main theme totally ripped my heart out, stomped on it several times, and put it back where it belongs oh so gently. "The Floating Continent Arges - Main Theme" received the exact improvement I would have asked from it. In a technical sense, the track is the same. The guitar has been updated to a live sample, and a harmonica now leads the piece. While that was enough of an improvement to have me in tears in itself, there was an addition of an acoustic guitar solo before the repeat that sent me over the edge. Yes, I will admit that I bawled like a baby hearing this new version for the first time.

"Hippolyta Hill" also received a tear jerking arrangement. Just like the last piece mentioned, the acoustic guitar was updated to sound more real. The main melody, however, now bounces between another guitar and a violin. Again it is exactly what I wanted to hear from this album. The last piece I'll mention here is "The Demon King Vespar". This piece also didn't change much structurally, but that doesn't really hold a candle to the new emotion I never thought could be squeezed from this unorthodox final battle theme. The piece just feels more "full" now. The strings seem to be a lot more prevalent, and the bagpipe takes on a new harmonic role in addition to the melody in the climax. The first one was emotional, but this takes it to a whole new lever, adding an epic feel to it as well. This is my opinion of perfection, hands down.

Next we'll move into some with drastic changes. "Kenopi Volcano" immediately jumps in my mind first, so we'll start there. The original had a quiet tribal feel to it while focusing on the piano. This one throws that idea in the trashcan and gives us a fun jazzy piece filled with xylophone passages coupled with a much more prominent percussion line. What started out as a quiet and unobtrusive dungeon theme is now an exciting piece that is way more listenable on its own. "Crop Caverns" also fits in this category. The beat of the theme has changed, and a fiddle now takes the melody. We do get a little bit of the flute before the percussion picks up and the fiddle runs towards the loop. This, by the way, changes the feel of the track from something dark but still hopeful to a very sinister tone.

There were a few tracks that received changes that weren't necessarily favourable. "The Illusionary World of Serpentina" also received a major revamp. This one isn't as interesting as the other arrangements. I actually favor the original to this for several reasons. The tone in the original track fit the feel of the final area of the game better. Also, this track is simply a copy of an arrangement on another Falcom album. It's not all bad though. The new acoustic guitar additions sound very pleasing and the percussion is livelier. Though the change is more subtle, "Fight!! Destroy it, Pockel!" is the first arrangement that made me turn up my nose. It actually made a pretty massive change, but it sounds too much like it belongs in Zwei 2. That's not that bad of a notion, it just doesn't fit with this game.

There were also several tracks on here that didn't really change a whole lot. "Puk Village" is still just as enjoyable as ever. It received an update in sound, and the melody is played on a flute instead of a harmonica for the most part. Other than that though, it really didn't change as much as some of the others. "The Floating Continent Arges - Dreams of Hidden Treasure" is another really nice theme that just fits in the updated category. I do enjoy this one more than the original, if only for the fact it is slightly more in your face with the newly added ambient sound effects.

Obviously I've left you with a few gems to discover for yourself, but if you appreciate the original album as much as I do you deserve to have the same experience I did. Overall I feel that this album was a huge success. For the most part, Yukihiro Jindo took an already outstanding set of music and made it even more outstanding. You can hear in all of the changes here that he tried very hard to make sure each piece didn't lose its flair from the first album. In all honesty, the majority of these tracks fit even better now. I'm not really sure if I can call this entire collection as a whole better than the original. On a technical level, yes it would be considered better, though some tracks just hold a nostalgic value that could never be duplicated. It is still worth every penny you spend buying it and every second you spend listening to it. Don't just take my word for it though. Go out there and snag this if you can find it. I promise you will not regret it in the slightest.

All Music by Hayato Sonoda, Takahiro Unisuga
All Music Arrangement by Yukihiro Jindo

Packaged with the PSP game in Japan.
Album was composed by Хаято Сонода / Такахиро Унисуга and was released on December 11, 2008. Soundtrack consists of 33 tracks tracks with duration over more than hour. Album was released by Falcom.