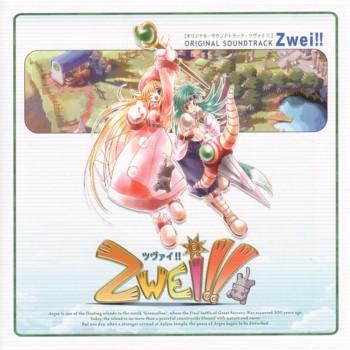 In the past, Falcom Sound Team J.D.K. has given us so many amazing styles with their massive discography on the Ys series and The Legend of Heroes, among many other things. Zwei kind of showed up out of nowhere, and totally changed the face of what we all knew Falcom for. While most past works were rock or pop based, this album took a different route and focused heavily on Celtic driven melodies similar to Yasunori Mitsuda's style. Being a huge fan of Celtic instrumentation I just had to have this album. Did it live up to my expectations? Read on to find out!

The first few tracks on the album really show how deep J.D.K.'s melodies can be. "The Floating Continent Arges - Introduction" is a xylophone/acoustic guitar piece playing the main melody of the game. While this piece isn't too intriguing on its own, you'll realize really fast why I absolutely adore the melody. "An Eternal Dream, Memories of the Heavens" opens the game with a track I would swear came straight out of Tsugunai. It is mostly an acoustic piece, with a few short bagpipe and flute sections thrown in to keep the interest up. The next piece I'm about to mention explains the little disclaimer I gave you while discussing the first track. "The Floating Continent Arges - Main Theme" takes the xylophone melody from the first track, and arranges it into a beautiful acoustic melody one is sure not to forget. The Celtic flute and guitar go so well together, and the addition of the violin in the bridge really pulls the track together and shows J.D.K. really know what they are doing here.

The battle themes on this album are few and far between, but for the most part depict massive emotional battles that the player is sure to not forget for a very long time. "Fight!! Destroy it, Pockel!" is heavily flute-based with pizzicato string work in the intro and sections of the harmony. It doesn't show a whole lot of action, but that is made up for in the complexity of the melody. I think it makes a perfect boss theme for the game. The next track is probably one of the most emotional and moving final battle pieces I think I've ever heard. "The Demon King Vesper" is the first track I think of when I have to come up with something epic with a Celtic feel. It's hard to come up with a leading or defining instrument here, as the bagpipe and violin seem to share that spot equally. The bagpipe at the climax of the piece almost brings me to tears though. It's really hard to find a track where an instrument as annoying as the bagpipe can be used so beautifully, but this one does so with grace.

The area themes here are where we get the bulk of the music from. They also seem to vary quite a bit in style and I'm assuming it does an impeccable job of fitting the areas they are assigned to. "Hippolyta Hill" is the first one I'm going to discuss. This piece is almost too calming to be an area theme. It is an acoustic guitar piece featuring violin and an odd sounding flute (probably some form of wooden flute). A viola comes in to cover the bridge into the repeat of the piece. This is a very different sound from J.D.K., but probably one of the more beautiful pieces on this album. "The Illusionary World of Serpentina" is a totally different style from the last one. Here we are treated to an upbeat theme which also integrates the main theme of the game again. This is my personal favorite of the area themes. The last area theme I'll mention is "The Ancient Labyrinth, Spiri". This one melds several different styles together with a very upbeat percussive line. The harmonizing violin gives the majority of the piece a somewhat Arabian feel, which the flute quickly shatters and brings in a more haunting section.

The last portion of the album is filled with movie scene themes and the ending themes. It also houses a few arrangements of past J.D.K. works, though many of them aren't really worth too much to mention, as they seem to just be medleys of other Zwei tracks. "Theme of Adol 2001" is an arrangement of the popular Ys theme in a Zwei style. There really isn't anything more to really say about it, though, as it really isn't too varied or interesting. The best one in this section would have to be "A Song of Wind and Flowers". The acoustic guitar, flute, and, woodwinds do a great job of closing out this game and album. It takes all the various styles of the album and meshes them all together to give us one amazing ending theme.

When I first got this album I really didn't know what to think. At first glance it really just seems like J.D.K. is trying to bank on Yasunori Mitsuda's successful style. I quickly gave up that thought though as this really showed some great originality for Falcom's sound team and shows that they are capable of more than just rock based soundtracks. I really want to hear more of them like this. This is a real treat for anyone who just wants something a little different. I urge anyone and everyone to hop on board and give this one a listen. You won't be disappointed.