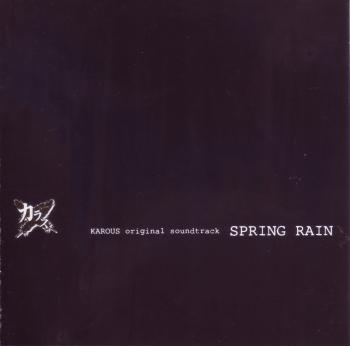 The Karous Original Soundtrack definitely offers another unique experience for fans of k.h.d.n. Featuring original compositions by Kou Hayashi and Daisuke Nagata, as well as arrangements of these themes by the team at SuperSweep, it manages to showcase a variety of electronic styles, all with a focus on percussion. How does it live up to the other soundtracks in the Milestone catalog?

In terms of compositional duties, this soundtrack is definitely more balanced than some of the other Milestone soundtracks. Daisuke Nagata offers the majority, barely, of the substantial compositions on the album. "1000 Clouds," the first stage theme, is a great way to kick off the game's levels. The melody line features a great mix of piano, distorted synth, and some more light-hearted electronic accompaniment giving the feeling that one is flying through the clouds. Without a doubt, the best thing about this theme is definitely the percussion work and the accompanying beats. The crazy percussion really helps give it a special touch and the industrial beats really work to strengthen the piece.

Out of the Nagata stage themes, the third stage theme, "You Can't Fxxk Me," is certainly outstanding. Although the introduction does last quite a while, the mix between the energetic percussion and warbled electronica make for an extremely intriguing listen. Add some additional layering and it works wonders. Once the theme picks up though, it takes on this very tranquil sound. The ethereal and echoed synth surprisingly works well with the more frenetic beat. Throw in some piano lines in the melody and you have an extremely upbeat, yet tranquil, theme. One of Nagata's best experiments to date! Nagata's last stage theme, "Death from Above 4098," is easily my favorite stage theme on the soundtrack. Even though it takes a rather minimalist approach compared to the other themes, this theme is all about power. The pounding bass, the crazy percussion sampling, and the menacing distorted synth in the melody line all make for an intense theme, even though the tempo is rather slow. Throw in some tranquil synth on occasion in the background and you have a winner. Nagata really hit this one out of the park.

In addition to the stage themes, Nagata also offers a few boss themes as well. As one might suspect from listening to Nagata, his approach for the boss theme, "The Extraordinary People," is no surprise. Featuring a more tranquil atmosphere with some great calming synth and percussion work, it manages to possess an ominous atmosphere, even if it doesn't exude terror like some other boss themes. As it progresses, some mechanical and industrial beats are thrown in to give a semblance of power, but it doesn't last too long. That doesn't mean it's bad though! He is also responsible for the final boss theme, "Hey Little Girl, Go Home Soon." The final boss theme is quite tranquil, as one might suspect, but still manages to give off a menacing atmosphere. Interesting percussion samples, some distorted industrial/mechanical sounding synth lines, and calming synth really help make this theme shine. As the theme nears an end, it definitely gets a bit more upbeat, but for the most part, it's very soothing, in a menacing way.

Kou Hayashi, Milestone's lead composer, manages to craft some very interesting themes. When it comes to the second stage theme, "One Thing Reality," Hayashi's percussion line helps bring about a great sense of urgency to the mix and when it's mixed with the heavy distorted industrial beats and the crystalline synth in the melody line, it manages to create a perfect mixture. Although the melody isn't as present as in other themes, Hayashi manages to create an extremely catchy theme nonetheless. His other stage theme, for stage four, is "Electric Chair." Similar in style to "One Thing Reality," it features a great percussion line with some menacing synth layering. The industrial and distorted beats really help give the theme a bunch of power and as with "One Thing Reality," even though the melody isn't as prominent as in some of his other themes, it still manages to impress through its heavy use of electronic beats and various electronic sampling. It's definitely Hayashi's strongest stage theme on this soundtrack.

"Atheistic Love," the tutorial stage music, features some heavy industrial beats with some slick mixing at times. In the background, there is an electronic humming effect to give it a bit more atmosphere. Overall, it's a pretty good way to open up the soundtrack's meatier themes. Upon reading this review, one might notice that the percussion is the focal point of this album by now. Lastly, Hayashi is responsible for the true final boss theme, "Sex Pervert of a Silence." Now, for those who aren't fans of these tranquil boss themes, then this theme is for you! Taking the motif heard in "Hey Little Girl, Go Home Soon," Hayashi creates an industrial hardcore theme with a great tempo, a dire sense of menace, brooding beats, some vocal samples, and some great percussion sampling. Some might find it noise, but I'd consider this the "Hibachi (True Last Boss)" (DoDonPachi series) of the Milestone soundtracks.

However, the soundtrack also contains remixes by the electronic masterminds at SuperSweep. Contributions by Shinji Hosoe, Ayako Saso, Yousuke Yasui, and Takanori Sato all help transform these themes into something new. Shinji Hosoe's first contribution, "1000 clouds -solid mix-," takes the original and definitely gives it a bit of an edge. The beats are a bit heavier, the distortion he adds makes the theme sound fuller, and the introduction of some new synth samples help give it a bit stronger industrial edge. It's got a nice futuristic soundscape but still manages to give that feeling of flying through the clouds. His second contribution, "Sex Pervert of a Silence -near heck mix-," takes an already hardcore mix and manages to make it much more hardcore. The beats are much harder and frequent, there is some excellent new percussion sampling, and overall, it seems to have a much more vibrant sound. It definitely manages to take Hayashi's hardcore soundscape and transform it with the elements of Hosoe's hardcore themes. Out of the Hosoe arrangements, this one takes the cake for me, but for most, it's probably intolerable, unless of course, you are into hardcore electronica.

Next up on the list is Ayako Saso with two arrangements of her own. The first, "One Thing Reality -switched-on mix-," is much more rave like. Heavy beats, an extremely fast tempo, some additional synth lines to give it its own unique identity, especially in the beginning all make this theme much more energetic than the original. Reminds me of something you might find in a Ridge Racer game. The quirky electronic sections she adds are also quite nice. Secondly, her remix, "Electric Chair -Terminal Hardcore mix-," throws in some elements for which she is known. Take the sinister approach of the original, keep it intact, but also throw in some new rave sections and a more hardcore beat to create an exhilarating atmosphere. The inclusion of some vocal samples throughout much of the remix helps give it that Saso touch and really works well with the accompanying beats. Overall, this is the best of her arrangements on the album.

Takanori Sato's sole arrangement, "The Extraordinary People -break down mix-," takes the rather tranquil atmosphere of the boss theme and creates a nice house remix with some killer beats, some industrial accents, and some excellent mixing. I think what I like most about this remix is how the industrial aspects of the original are carried through in the background and the fact that it's such an upbeat remix. Of course, Sato does throw in a bit of the calming atmosphere of the original, but adds some distortion and other electronic effects into the mix. This is one of my favorite arrangements on the album!

Last, but surely not least, is Yousuke Yasui. His first arrangement, "You Can't Fxxk Mme -rush act-," definitely intensifies it quite a bit. The opening intro is much more effective in terms of creating a powerful feeling and although it extends for a period of time, similar to the original, Yasui adds enough electronic variation and effects to make it interesting. His new electronic variations also really work well with the piano line that is carried over from the original. However, his second arrangement, "Death from Above 4098 -artillery mix-," is the better of the two, in my opinion. Whereas the original focused on a minimalist approach, Yasui opts to add a nice, hardcore beat that really accentuates the powerful distorted synth in the melody line. To take it one step further, later on in the remix, he masks the distorted synth almost seamlessly and uses it as more of an accompaniment rather than the feature. Hell, at times, he even distorts it further. Truly an interesting take on the original!

Although I still consider the ChaosField Original Soundtrack the crème de la crème of the Milestone soundtracks, I really think that this soundtrack really came close to joining it. It features some excellent electronica, all varied, but with a focus on percussion sampling. Hayashi doesn't think he succeeded when it comes to creating a sound no one's heard in a game before. Whether that's true or not, he still managed to succeed, alongside Daisuke Nagata, in creating an extremely crafty soundtrack. Even without the SuperSweep arrangements at the end as a bonus, this would be an excellent soundtrack to pick up, but it's certainly a fine thing that they are there. If you are a fan of k.h.d.n., this is definitely a soundtrack that needs to be in your collection.