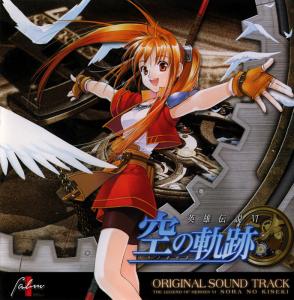 It took longer for Falcom than most companies to achieve its musical renaissance, but it eventually happened in 2002 around the time when Hayato Sonoda took over the Falcom Sound Team J.D.K. He offered a range of highly creative scores for the company, including Zwei!!, Gurumin, and VM Japan, before reflecting the evolution of the sound team's music on the more traditional The Legend of Heroes VI: Sora no Kiseki. With its numerous highlights, diverse styles, and outstanding production values, the resultant work is possibly the finest RPG soundtrack Falcom has ever produced. The in-game soundtrack is faithfully reproduced on this two disc set.

The opening theme "Sora no Kiseki" immediately demonstrates the increased maturity of the sound team. In line with earlier opening themes in the series, this main theme complements the beautiful fantasy scenery of the game, yet the melody is far more adventurous than its melancholy predecessors in order to represent the main character Estelle. Yukihiro Jindo's orchestration is exquisite, bringing both a classically-oriented finesse to the phrasing and a cinematic drama to the development, culminating in a spectacular climax at 2:00. The thematic strength of the soundtrack is enhanced by the exposition of the much more sorrowful and contemplative "Where the Stars Are" theme on harmonica, intended to represent Joshua. Both melodies make appearances throughout the soundtrack, ranging from short nostalgic reprises in the centre of the soundtrack to the full-blown pop ballad performances of "Where the Stars Are" at the conclusion. The reprises are generally well-arranged and integration, and together the themes certainly make the game and album experience all the more memorable and emotional.

As the soundtrack progresses, there are plenty of refreshing twists on standard RPG formulae. "Departure on the Short Road", for instance, resembles many other 'starting off' themes with its peaceful yet adventurous quality; however, the instrumentation is altogether more refined and interesting than preceding themes in the series, whether the wistful flutes, heroic trumpets, or more exotic accordions. "Rock on the Road" takes things one step further with its folksy influences and infectious phrasing with the final result sounding like Chrono Cross and Final Fantasy Crystal Chronicles. There are also a range of more detailed setting themes to depict specific places. Some such as "Tour of Liberl", "Grancell", and "Royal Castle" are very stately and classically-oriented, but still highly charming. Others such as the techno-infused "Zweis", jazz-tinged "Layston Fortress", or surprisingly tropical "Bose" are much more modern. Once again, they exhibit outstanding composition and synthesis, demonstrating how the Falcom Sound Team J.D.K. have gone on to master pretty much all genres.

As with many other Legend of Heroes soundtracks, Sora no Kiseki exhibits a youthful quality, but it isn't without depth. Even early on the soundtrack, dreamy themes like "Rolent, the Provincial City" and "A Cat Relaxing in the Sun" feature slightly dark and depressing undertones. Softer entries like "Under the Moonlight", "Amber Love", and "In the Heart" also seem to grab listener's hearts with their simple yet effectual motifs and underscore the love story beautifully. Of course, dungeon themes like "Tower of the Four Wheels", "Creeping Crisis", and "Wandering in the Darkness" are highly effectual with their abstract chord progressions and mystical soundscaping too; they add that much-needed grit to the soundtrack and are sometimes very psychological. The sound team also offer an eight part renaissance-styled suite entitled "The White Flower Madrigal" at the centre of the soundtrack. While most of these tracks are short, they each work wonderfully in their specific context and some like the funereal "Colosseum" go on to become central to the soundtrack experience.

In series' tradition, there are plenty of action themes running through the soundtrack, but they deviate from the rock styles most would expect. "Sophisticated Fight" is completely surprisingly for an action theme since it's written in a very jazzy style. It's nowhere near as derivative and superficial as jazzy tracks from earlier soundtracks and the fusion of orchestral and jazz instruments is particularly effective. Though the saxophone synth is slightly jarring, the rest of the track has so much finesse and dynamism that it is nothing short of delightful. This jazzy influence is elaborated upon in slightly more tense tracks like "Pinch!!", "Don't Let Him Go", and "To be Suggestive", always to refreshing effect. However, it isn't until the finale that listeners are treated to particularly intense action themes. "Silver Will" is a guaranteed fan favourite with its hyper-catchy violin melodies and infectious techno backing. "The Fading Light..." and "Those Who Protect..." meanwhile are intense spell-binding orchestrations used during the final battles. The soundtrack ends on a refreshing note with a mixture of jubilant festival dances, pensive orchestral epilogues, and a surprisingly good vocal theme mixing pop and exotic influences.

With The Legend of Heroes VI: Sora no Kiseki, the series finally transcended beyond featuring 'merely decent RPG music' to being truly remarkable. By evolving and experimenting upon the standard RPG soundtrack approach, the Falcom Sound Team J.D.K. managed to offer numerous high quality, refreshing, and memorable compositions. In context, the soundtrack provides an engaging and emotional complement to the gameplay and storyline. Out of context, the soundtrack is a diverse listen jam-packed with highlights. In my opinion, this soundtrack stands firmly alongside the best of Square as one of the finest traditional RPG soundtracks out there. A highly recommended listen, whether you are a fan of Falcom or not.

"Whereabouts of the Stars"
Lyrics: Hideaki Hamada
Arrangement: Kohei Wada
Vocal: u-mi
Album was composed by Takahide Murayama / Wataru Ishibashi and was released on July 30, 2004. Soundtrack consists of 59 tracks tracks with duration over more than 2 hours. Album was released by Falcom.