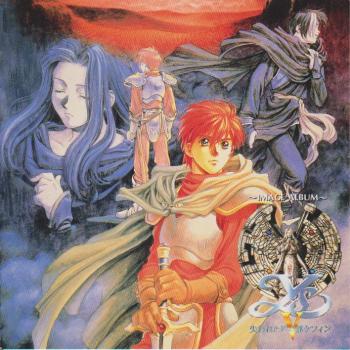 The Super Nintendo's Ys V: Kefin, The Lost Kingdom of Sand departed from past titles with its largely orchestral focus of its music. The music for the game has been commemorated with a full original score, an orchestral arranged album, and an image album. Unfortunately, the image album is the least worthwhile of these since it features few arrangements and much recycled material. That said, the actual music is still enjoyable. Let's take a closer look.

The first nine tracks of the album are taken directly from the original score and thus are identical to the material in Music from Ys. This will be a disappointment for those looking for original material, although at least the selection captures the spirit of the score and features some of the best tracks. "Field of Gale" is deservedly a fan favourite, for the way it combines the structure of a rocking battle theme, with the use of orchestral instruments instead. "Crimson Ruins" maintains a similar approach, yet has an even better melody in my opinion, while "Charged Trial" is closer in format to a traditional orchestral action theme. However, there are less successful items among the selection, such as the plodding piano and stings theme "Forest Village" or the sometimes repetitious "Desert Clime", yet even these have their moments. Other likeable items include the funky character-driven "Thieves of Brotherhood", gritty climactic "Break Into Territory", and the soothing closer "Niena".

Thankfully, the remaining five tracks on the image album are exclusive arrangements for the album. There are three performances by an updated incarnation of fan favourites, the J.D.K. Band. "Field of Gale" reflects how the original theme might have sounded were it to extend its rock influences down to its instrumentation too. Though not as hard as most Falcom rock performances, it's still a driving piece featuring plenty of upbeat melodies and bubbly electronic frills. "Thieves of Brotherhood" meanwhile elaborates on the funk influences using much more authentic instrumentation and the result is even more entertaining than before. Their last arrangement "Break Into Territory" takes some time to build up, but soon becomes an emotional rock anthem featuring beautiful soundscaping and edgy drum beats. It's a wonderful take on the original yet leaves one desiring even more arrangements.

The album closes with the image song, "Brand-New Memories", based on "Niena". The vocalist Midori Kawana offers a very youthful and naive performance. While not all will enjoy her tone, they still suit the nature of Niena's character. The poppy backing retains the sentimental and dreamy aura, though the focus is clearly upon Kawana throughout. As a result, the karaoke version that ends the album is far from entertaining, but good for the sake of completism at least.

The Ys V Image Album is an enjoyable listen from start to finish. This is thanks to a good selection of original tracks and a few high quality arrangements. However, it isn't really a suitable alternative to Music from Ys V, since it still omits several highlights from that score. Unfortunately, the exclusives aren't enough to give the image album much appeal for those who those who already bought the original score. However, hardcore collectors might still find it a worthwhile purchase and should enjoy every minute of it.