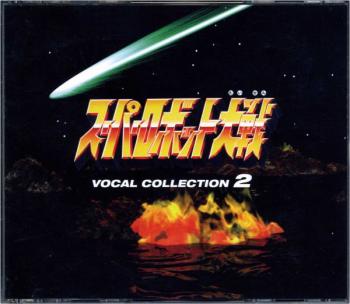 Here's more of the same. The purpose of the Super Robot Taisen Vocal Collection 2 is to reflect the original nature of the anime theme songs that are arranged extensively in the Super Robot Taisen series. Expect to hear songs from franchises such as Gundam, Ideon, and in their ancient glory with their vocals restored. The results are far from deep, but potentially charming nonetheless...

The album opens with an arrangement of an original composed for the Super Robot Taisen series, "Crossing Time". It isn't the strongest rendition, due to its generic rock stylings, though the melody is nicely brought out. The three-way vocal performances by Ichiro Mizuki, Hironobu Kageyama, and MIO are the main highlight here.

Thereafter there is a rendition of Great Mazinger's "Tetsuya's Theme". Like the performances in the original Vocal Collection, Ichiro Mizuki is able to bring more life to the melodies with his half-operatic, half-poppy vocals than the horribly synthesised brass did on the Super Robot Taisen arrangements. Furthermore, the use of more authentic jazz accompaniment is another clear improvement. It's definitely not for everyone, but it's possible to understand why some younger audiences might find the performance charming.

Elsewhere on the album, there is a little variety provided by the different performances. "Song of Voltes V" has a slightly goofy feel with its female vocals and silly accompaniment, almost reminiscent of stereotypical Russian folk songs; "Beyond Time", on the other hand, is a little more sassy and seductive. "Anime Ja Nai" meanwhile injects a bit more of a rock spirit and is reminiscent of more modern theme songs in the series, except less well-produced. Basically, though, the material is uniformly bouncy and superficial, hence not for everyone.

In contrast to the original vocal collection, there is a second disc on the soundtrack dedicated to karaoke versions of the theme songs. They're definitely no good for stand-alone listening, since the melody line is completely absent, giving a hollow sound. That said, most wouldn't want to be caught singing karaoke to these songs, even if they enjoy karaoke in the first place. Overall, a pretty pointless disc.

The material here isn't as strong as the first vocal collection, but there are still some fun performances of fairly famous theme songs that exceed their Super Robot Taisen arrangements. That said, most of the music featured here sounds pretty old and Ichiro Mizuki's vocals are definitely a select, arguably dubious, taste and the second disc is a waste of money. Most can safely skip the album, either in favour of the first vocal collection or, ideally, nothing at all.