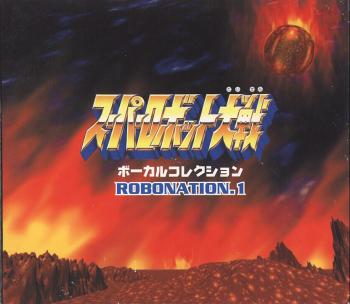 The first halves of most Super Robot Taisen soundtrack releases tend to be dominated by instrumental arrangements of famous anime theme songs. The main purpose of the Super Robot Taisen Vocal Collection is to restore the vocals and reflect what the original themes were like. Expect to hear songs from franchises such as Mazinger, Gundam, and Getter Robo in their ancient glory. It's time for some silliness...

The selection here is mostly dominated by performances by Ichiro Mizuki, the king of the rather exclusive kingdom of anison. His half-operatic, half-poppy vocals appear in the majority of the selections here and inject plenty of life into the source melodies. The themes from the Mazinger series tend to be the most annoying aspect of the old-school Super Robot Taisen soundtracks with their nonsensical brass leads and synth leads. They're much more enjoyable in their original forms here, with Ichiro Mizuki's charismatic and varied treatment of the melody, and the authentic jazz accompaniment. "Mazinger Z" is a fun, bouncy way to open the album, while "I Am Great Mazinger" features very cute children's backing singers. They're select tastes, certainly, but not abominations like some of their instrumental counterparts.

The theme arrangements in the Super Robot Taisen series generally suffered from near-identical arrangements in the past and this is, in part, due to the source material. The songs featured here are uniformly dominated by similarly shaped upbeat melodies and superficial jazz-oriented accompaniment. That said, the originals are a little more entertaining en masse due to the use of different vocal styles and vocalists, rather than hideous brass synth throughout. A particularly enjoyable feature is the use of female vocalist MIO to interpret two of the slightly deeper entries in the album, "Fly, Dunbine" and "To the Star of Water With Love". Likewise, Hironobu Kageyama's performance on "Burning Love" injects a contrasting rocking feel to the otherwise feathery album, serving as a prelude to some of JAM Project's work.

While most of the source material is mecha animes, there is one original vocal arrangement at the start of the album. Masaki's character theme "Scirocco! Gale! Cybuster" receives an upbeat J-Rock arrangement featuring a duet between Hironobu Kageyama and Ichiro Mizuki. Surprisingly, this arrangement isn't that enjoyable despite the strength of the original melody and the decent vocal performances. The rock work just sounds too cookie-cutter, with overly abrasive and repetitive rhythm guitar riffs and tagged-on electric guitar solos. There are better renditions in the main soundtracks.

This album is a decent compilation of mecha anime theme songs. It's interesting to revisit the source material of the various theme song arrangements featured in the Super Robot Taisen franchise and, generally, it is comforting; for the most part, the originals are more enjoyable due to the more expressive vocals, greater emotional range, and more authentic instrumentation. That said, most of the music featured here sounds pretty old and Ichiro Mizuki's vocals are definitely a select, arguably dubious, taste. Most can safely skip the album unless they're feeling curious or nostalgic.