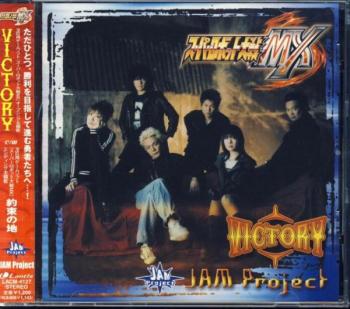 JAM Project are a J-Rock group that principally make theme songs for animations. In addition, they have been a regular force on Banpresto's Super Robot Taisen games, given their extensive use of mecha anime crossovers. After debuting on the PlayStation's Super Robot Taisen Alpha, they have appeared on nearly every main game on the series, each time releasing singles featuring their opening and ending theme songs. What about their contributions to perhaps the best series' score, Super Robot Taisen MX?

The opening theme "VICTORY", in particular, is especially striking with its gothic harpsichord introduction and use of ensemble vocals during the chorus. The verse of the song is actually more conventional J-Rock, but there are still plenty of idiosyncracies in its treatment. Interestingly, this track also receives an awesome orchestral rendition in the orchestral release, though the fully fleshed original featured here is also very charming.

The ending theme "Promised Land", on the other hand, is a little deeper than most ballads with its part-ethereal, part-rustic new age instrumentation. Vocalist Masami Okui brings out a wistful and reflective quality to the melody, without being overly sentimental. The full version featured on the single and vocal collection doesn't offer that many novel elements to the track, but the melody is given the chance to expand more and there are some fantastic instrumental passages, such as the folksy finale.

It's pleasing how JAM Project made a bigger effort to integrate their music for Super Robot Taisen MX into the style of the rest of the soundtrack. Clearly JAM Project are capable of being versatile when they want to be. Instead of heading for this single, though, dedicated fans of JAM Project should consider the Super Robot Taisen JAM Project Theme Song Collection instead, since it features these full-length songs and 12 others from the series.