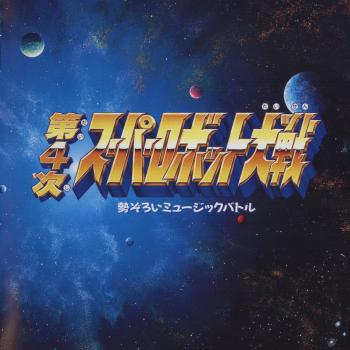 4th Super Robot Taisen was initially released on the Super Nintendo in 1995 before being re-released on the PlayStation in early 1996, featuring voice acting and cutscene movies for the first time in the franchise. The soundtrack release for the game, Super Robot Taisen Powerful Music Battle was released shortly after the original release, and features six arrangements, original background music, and also sixteen anime theme songs. Though decent music previously appeared in the series, 4th Super Robot Taisen was the first album the series to receive an album release. It sets a strong precedent for subsequent album releases.

Out of the large number of composers who contribute to this album, Noboru Yamane and Shinichi Tanaka are the most prominent, providing seven themes each (including the arranged versions). Yamane's first theme on the album, "Time to Come", is a very upbeat track with a stunning melody and cheesy undertones. A similar style is brought forward in "Prepare for Attack" and "100 Light Years of Courage," both of which feature decent melodies, whilst also emanating a very grandiose atmosphere. Out of the two, "100 Light Years of Courage" is perhaps the most grand, with its orchestral synth instrumentation providing a particularly war-like feel. "Invasion" and "Power and Art" each take upon a darker atmosphere meanwhile with each theme making use of some intriguing electronic sound effects. "Power and Art" is such a strong track that it actually receives a rearrangement towards the start of the disc for full orchestra; it does the original theme great justice by adding a richer harmony and highlighting the melody with a decent string section.

Shinichi Tanaka's contributions are also impressive, and take upon similar styles. "Scirocco! Gale! Cybuster" and "Main Theme ~Crossing Time~" are each very upbeat themes with strong melodies and hard hitting drum accompaniments. While the former has gone on to become a major character theme in the series, the latter track receives an arrangement at the start of the album; the arrangement is a fairly impressive one with its screeching guitar lines and upbeat rock accompaniment. We do also hear a couple of more ominous tracks from Tanaka, with "Valsion" and "Requiem" being the best of these. "Valsion," representing one of the enemy robots in the series, creates a dangerous vibe with its simplistic, yet aggressive, melody and accompaniment. "Valsion (Arrange Version)" is even more menacing and the choir really shouts out the melody. "Requiem," too, is a decent track, and starts off slow-paced with a melancholy vibe from a simple chime line and sweet string section. The track becomes a lot grander as it continues, but the lengthy sustained string notes in the background ensures that it remains ominous.

Alongside the original compositions, there is also a selection of fairly decent arrangements of anime theme tunes. Asei Kobayashi's "Combattler V's Theme," Amikura's "Fly, Dunbine," Serizawa's "Silent Voice," and Kikuchi's "Getter Robo!," lead the album in terms of crazy upbeat themes. They feature some gripping melodies, justifying their selections for their respective anime stages here. Takeo Watanabe's "Dashing Char" from Mobile Suit Gundam is also an excellent arrangement that manages to be particularly menacing despite its melodiousness. That said, many who have heard the anime soundtracks, or subsequent additions to the Super Robot Taisen series, may tire of these tracks since they have been released on CD many times before, often with improved arrangements.

Super Robot Taisen Powerful Music Battle is an interesting experience and a fairly good soundtrack for a Super Nintendo game. The inclusion of the six arrangements at the start of the album certainly is a plus, but the original game music can also stand for itself. Throughout the soundtrack there are the odd one or two especially striking tracks which you are sure to enjoy, while the theme song arrangements are as striking as the originals. Bearing in mind the sound limitations of the system, this is a decent accomplishment. That said, there are better collections of music for the system, and I'd only really advise the purchase of this if you are an avid video game music collector or fan of the game.

Tracks 7-22 are anime theme songs used in the game. Tracks 23-32 are original BGM, and tracks 1-6 are arrangements of the original BGM.