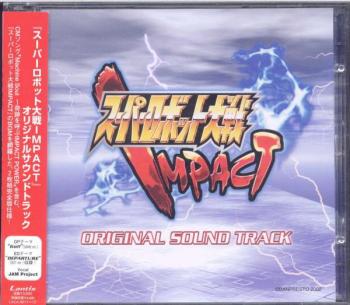 Following their well-received spot on the Super Robot Taisen Alpha soundtrack, the pop group JAM Project return to interpret the opening and ending themes for Super Robot Taisen Impact. Neither are particularly inspiring and "GO!!", in particular, is about as subtle as its title. Expect shouting male vocals and abrasive guitar riffs that collectively create quite a persuasive sound. Perhaps thankfully, it is cut short to just 43 seconds in its game rendition here. "Departure" takes a more balladic approach with romantic male vocals, soft piano backing, and electric guitar dabs before exploding into something more happy-go-lucky in the last 30 seconds. It's a really clichéd way to the end the soundtrack, but at least stays true to anime tradition.

The first disc is entirely dedicated to instrumental arrangements of mecha anime theme songs. A wide selection of 35 tracks were chosen and each accompany a particular anime-based stage in the game. The selection is quite good overall. There are more novel entries from Machine Robo, Ninja Robots, and Nadesico to add a bit of diversity to the usual staples. In addition, there are conservative arrangements of some classics such as "Getter Robo!", "Fly, Dunbine", and "Shining Through the Storm" that will be familiar to most Super Robot Taisen series. These tend to be quite likeable, though a few from the Gundam and Mazinger series are a little irritating with their silly melodies and superficial arrangements. At least there's plenty to choose from.

While the arrangements are mostly of the superficial sort, the original compositions featured across the second disc tend to be considerably more elaborate. This is immediately evident from the opener "And Now, Impact", which achieves a considerable scope despite its two minute track time. The elements could have been synthesised better, but the blend of funk and rock elements is still expertly achieved. "A Flow of Gunsmoke" meanwhile is far more colourful and ambitious than the orchestral tracks in the first disc. The opening section expresses the deeper, conflicted emotions not really channeled in the almost uniformly upbeat anime theme songs. The development thereafter is surprisingly intricate and reflects the composer's strong command of orchestration.

Those more interested in the rock aspect of the series should fine many of the original compositions appealing too. "Alchemist of the Swaying Heart", for instance, manages to be a pleasant old-school rock track that lacks the forceful quality that dominates much of today's game music. "The Organisation for Conquerers" meanwhile is a great union theme with its catchy keyboard melodies and upbeat electronic frills. Moving on, the likes of "Suspicious Broadcast" and "Solving the Equation" are a fine precursor to the more abstract entries on Super Robot Taisen MX. It's fascinating how the artists elegantly blend jazz improvisations with moody orchestral and electronic elements here. A special mention is also deserved for "At One Time, a Nocturne Was Heard", a fleshed-out and emotional closing theme.

Overall, Super Robot Taisen Impact features a largely enjoyable and effective soundtrack. Unfortunately, the theme song arrangements tend to be quite straightforward and samey, despite the impressive quantity of them. The original section considerably redeems the album, although isn't quite to the quality of its successor Super Robot Taisen MX. While not one of the best in the series, this soundtrack will still be enjoyed by collectors.