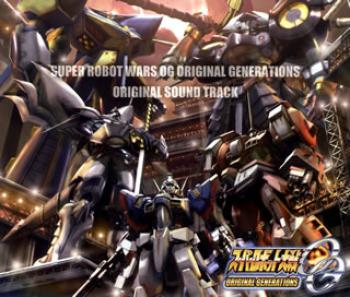 The album opens with "Divine Wars". This is an awesome fusion theme that opens with a mysterious orchestral base before moving into an fusion piece combining rock, electronic, and orchestral elements. The disjointed nature of the theme is a bit strange, but overall, this track manages to impress. It is one of the better orchestral themes on here though. "The Judge, the Judged" is another interesting fusion theme. The orchestral elements, combined with the catchy electronic beat make for a great theme already, but the haunting operatic vocals that are interspersed throughout make for a fantastic addition and make this one of the highlights of the soundtrack. Another interesting fusion is provided by "Sword - Soul - One - Strike", which combines rock, orchestral, jazz, and some Asian elements into one. It's got a great atmosphere, but the melody leaves a bit to be desired. This theme is definitely one where the combination of elements is its prominent strength.

Like other Super Robot Taisen soundtracks, there are plenty of rock themes here. "Variable Formation" is a rock theme through and through. It's got a pretty good melody and the guitar riffs go well with the melody. It's not nearly as colorful as some of the other themes on the album, but it's full of adrenaline. "Marionette Messiah" is another theme with a great melody and a nice electronic bass line, with some rock accents in the harmony. The focus here is on a brass melody as well and works well in the same way. Much the same applies to "Ice Man", another theme that could belong in a Rockman soundtrack and even has a fitting name. Next up, "Steel Beowulf" is a progressive rock track with some nice synth accents and an awesome melody. This is one of those themes that just makes me smile when I hear it. "Treue" is also one of my favorites. It combines a pulsating bass line with some a rock and gothic nature at times. It definitely gives me off a Malice Mizer (a J-Rock band) at times. The melody is definitely one of the strengths in this one.

There are a range of orchestral tracks on the soundtrack, both upbeat and dark. "The Super Robot Wars" is an epic orchestral theme that hints at heroism, a hint of darkness, and regality. It features a pretty nice melody as well, although the accompaniment seems a bit trite. "Steel Ark" is an orchestral theme with a very heroic soundscape. The militaristic accompaniment combines with the melody quite nicely. However, I'm not particularly thrilled by this one. The melody just doesn't grab me like some of the other themes on the soundtrack. On a similar note, "Steel Ark (Ver. M)" seems to be resynthed. The sound is better overall, but it still suffers from the qualities of the original. Likewise "Super Robot Symphony" is an upbeat, heroic orchestral theme, but as with many of the other orchestral themes, the melody doesn't really grab my attention. To make it worse, the accompaniment is so static and really detracts from the piece.

Moving to some darker selections, "The Gate of Magus" is a gothic organ piece. There is a subtle electrorock accompaniment, but the majority of the piece features organ, haunting chorus, and orchestral elements. It's another one of the standout themes on the soundtrack, but mainly for the atmosphere it exudes. "Silencer's Alignment" is a piece that, when it comes to atmosphere, is also spot-on. The ethereal vocal work, the electronic "garbling," and the use of piano create a very dark nature and one that truly works. Less impressive is "Omnipotent Arbitraitor". Unfortunately, like a lot of the other orchestral themes, it leaves a bit to be desired in terms of melody and overall direction, but the piano accompaniment is definitely the star of the show. It just adds so a lot of atmosphere to the theme. "The Last Judgement," another orchestral theme, is also quite dark in nature, but sadly, it isn't given time to develop despite its climactic placement in the game.

Coming to the end of the soundtrack, "Cherry Blossom Illusion" is another catchy synth rock piece that features moments of exhilaration and moments of calm. The synth elements and the rock elements fuse together quite nicely, and even when they are separate, they manage to work quite well. The choral accents heard in the background help give it a "spiritual" feeling. "Wild Flug" is a pretty rockin' theme as well, at least in terms of accompaniment. Its speed metal base, combined with the more light-hearted synth melody is an interesting combination, but one that doesn't manage to stick out as much as it should. It's still fun to listen to, but one of the weaker themes I feel. To round off the review, "Poem of Thawing is a heartfelt theme, at times. The melody is quite nice and the use of brass, ethereal choral work. However, when the rock elements kick in, I find it to be more appealing. Overall, it's a pretty beautiful theme.

Out of the soundtracks in the Super Robot Taisen series that I have heard, this is easily my favorite one. Unlike most other Super Robot Taisen soundtracks, this one doesn't rely on arrangements of those anime theme songs that have grown tired over here. Though there are some classic arrangements here, they're limited to character themes, JAM Project songs, and a few others. Basically, though, the highlights are the original compositions. There's a great variety of styles, high production, and plenty of memorable original melodies. I'm particularly fond of the synth and rock-based themes and, aside some of the lacking orchestral themes, most of the soundtrack is very enjoyable. I suggest this album to you if you've played the game and liked the music. It wasn't quite what I was expecting (in a good way), and I was left quite pleased.