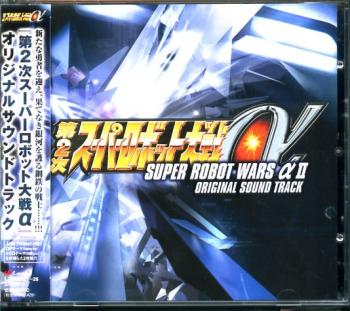 Banpresto's ever-expanding robot saga continued in 2003 with 2nd Super Robot Taisen Alpha for the PlayStation 2. The soundtrack for the game, created by the three-person team at Salamander Factory, was commemorated with a complete album release by Lantis divided distinctly into two halves. While a bigger soundtrack, is it necessarily better than its predecessor?

Once again, JAM Project lead the score for 2nd Super Robot Taisen Alpha with two theme songs. In what has become a recurring trend for the series, the opening track "Skill" is cut cripplingly short in the game animation and soundtrack release, left exclusive to the single. What is given is nevertheless quite catchy with its 'call and response' vocal passages and dramatic rock accompaniment. The ending theme "Forever & Ever", while not the full version, clocks in at a respectable 2:39. There is creative use of both the male and female vocalists here. Indeed, whereas some parts of the song resemble a romantic duet, others are closer to a rock anthem. Unfortunately, though, the song comes across as a bit disjointed overall despite its touching moments.

Aside the opening song, the first disc of the soundtrack is entirely dedicated to arrangements of anime theme songs. There are a mixture of new arrangements and rehashed arrangements here, and the two types are readily distinguishable due to synth differences. From the Gundam series, "Silent Voice" is near-identical to its rendition on the original Alpha. The tracks have been slightly remastered, but still sound just as uninspiring with its feeble synth lead and dated pop accompaniment. Taken from the same series, "Sally" follows the anthemic brassy format of many theme song arrangements elsewhere. Yet the trumpet this time sounds much more real and the classically-oriented accompaniment. There is at last some progress, but it's a real pity that the team did such a lazy job with the rehashed pieces.

In terms of theme song selections, the choices here are considerably more extensive than those in Super Robot Taisen Alpha. Between the typical additions from the Mazinger titles and Robot Romance Trilogy, there is a much more fleshed-out selection of Gundam favourites. Furthermore, there are some debuts that introduce a new sound to the series. Aside the quirky introductory theme, the selections from Kohei Tanaka's King of Braves GaoGaiGar have a tense orchestral feeling, serving almost as a prelude to some original tracks featured in the main soundtrack. "In My Dream" from Brain Powered provides some of the most sentimental moments on the disc, while the somewhat underdeveloped "Ephemera" is a downright strange ending. A special mention is also warranted for GoShogun for bring a touch of Johann Strauss Jr.

The second disc of the soundtrack is dedicated to the original compositions created for 2nd Super Robot Taisen Alpha. Some of the additions here bridge the gap with the anime theme arrangements. For example, there are some enjoyable new remixes of existing themes such as "Trombe", "Ace Attacker", and "My Rival" that mostly continue the upbeat focus. In addition, there are some original compositions with an anime-inspired sound. "To that Blue Sky" is particularly anthemic with its bright youthful melody and energetic rock accompaniment, going on to receive an arrangement in 3rd Super Robot Taisen Alpha. "The Sword That Cleaves Evil" takes things one step further and is a fantastic theme to represent the honorable demeanour of Sanger Zonvolt. It's excellent how the team at Salamander Factory are able to create such old-school themes while still expressing their individuality.

For the most part, however, the original compositions tend to be more dramatic than those in the first disc. Right from the dark cinematic orchestrations "The Guardian of Earth" and "100 Travelling at Night", the team reflect that an epic saga is about to unfold. Perhaps the most impressive feature of such additions is the amount of intricacy contained within the synthetic orchestrations. Even shorter tracks such as "Antagonistic Visitors", "Alpha Numbers", and "Custos" show great attention to detail, making them much more dramatic in context and entertaining outside it. Though the soundtrack doesn't quite attain such a balanced dramatic arch as other Super Robot Taisen albums, the collective additions make for a very rich listening experience.

The anime theme song disc is a mixed bag, due to the bizarre combination of rehashes and new arrangements, but is quite a wholesome selection overall. The original compositions, however, are the main highlight and there are some especially attractive action pieces and cinematic orchestrations. While not the best soundtrack in the series, it is a clear progression from its predecessor that is enjoyable both in and out of context. 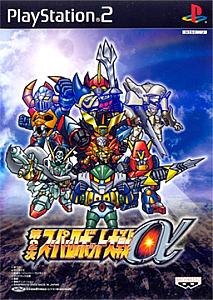