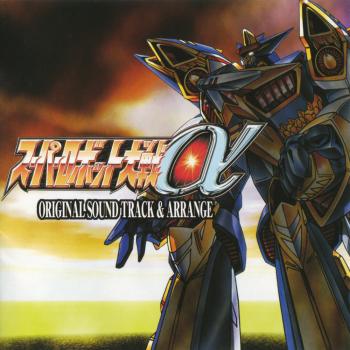 Super Robot Taisen Alpha is the first game in the second generation of Banpresto's robot saga, originally released for the PlayStation in 2000. As a result of the strong sales and iconic nature of the game, there were multiple albums released featuring music from the game, but none of those were complete on their own. A particularly limiting album is Super Robot Taisen Alpha Original Soundtrack & Arrange Album, which features an incomplete selection of anime theme song renditions and eight exclusive arrangements of the original music.

The first 17 tracks on the album are instrumental arrangements of anime theme songs for the PlayStation version of Super Robot Taisen Alpha. Most followers of the Super Robot Taisen series will have heard these tracks before in often superior forms. The selections are mostly limited to staple tracks such as Mazinger Z's main themes, Gunbuster's "Top o Nerae!", and, of course, Neon Genesis Evangelion's "A Cruel Angel's Thesis", although disappointingly there is no Gundam music to be found. This selection is considerably more limited than the more diverse ones featured in Alpha's direct sequels and most tracks selected adhere to a similar format.

The main problem with the anime selections, however, is their arrangements. Nearly all the arrangements feature a buoyant brass lead interpreting the melody against simple poppy accompaniment. The resultant sounds are quite charming at first and bring out the original melodies. However, the approach is rather superficial overall and becomes irritating rather quickly; most listeners will have turned off way before they arrive at the themes for Combattler V and Voltes V. Furthermore, while decent for its time, the implementation is quite limiting and only adds to the monotone quality of the album.

The album ends with eight arrangements of BGM tracks featured in the game. While a number of tracks were exclusively composed for Super Robot Taisen Alpha, others will already be familiar to series' veterans. All the melodic might of "Scirocco! Gale! Cybuster" and "Everywhere You Go" is brought in the anthemic rock interpretations here. They're certainly sound a little old-school, but that's arguably part of their charm. "Dark Prison", on the other hand, ends the album in a conflicted note. Much of the track features motivating rock instruments, yet they are accompanied by rather bittersweet orchestration, at least up to the grandiose interlude at the 1:13 mark.

Moving to the rest of the arrangements, they're a mixed bag. The gritty rock-based interpretation of "Vanishing Trooper" certainly brings a lot of energy to the score, but the electric guitar lead does not suit the piece as well as Hironobu Kageyama's vocals. "Ace Attacker" also doesn't entirely suit its funk interpretation here and the saxophone leads and wah-wah sounds are particularly cheesy. At least "My Rival" receives an arrangement that exceeds the original. The trumpet leads bring out all the humour and charm of the melodies in typical anime-esque fashion. The accompaniment meanwhile is quite diverse with some traditional Japanese influences and a buoyant jazz vibe.

Overall, this album is probably the weakest of the releases dedicated to Super Robot Taisen Alpha. The BGM arrangements are rather enjoyable, but a little too generic and innumerous to be must-haves. The rest of the soundtrack is comprised of very samey and superficial mecha anime tracks that have been arranged elsewhere. Those interested in the original music for the game would be better to look at the other album releases for Super Robot Taisen Alpha.