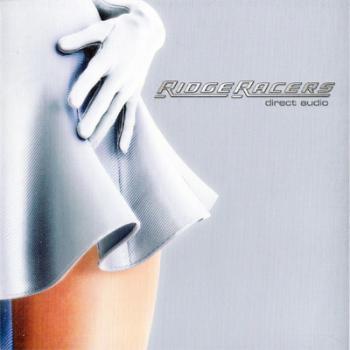 Ridge Racers was a highly successful PSP instalment of the long-running Ridge Racer franchise released in 2004. Given the nature of the game, it seemed appropriate that the soundtrack featured a blend of old and new. Newly appointed audio director of the series, Hiroshi Okubo, took the lead and developed a fresh electro sound to the game. However, he also recruited most other composers from the series' past to make new contributions, among them the Sampling Masters quartet from the earliest Ridge Racer games and artists such as Kota Takahashi, Asuka Sakai, and Yu Miyake from RR4 and RR5. To enhance the tour of the series' styles, the Ridge Racers Direct Audio also features a bonus second disc compiling remixes and original tracks from earlier games in the series. Does new, old, and ancient come together successfully?

Hiroshi Okubo's "Departure Lounge" is just right for building up to the start of the race. Despite its minimal features of ambient synth pads and ascending piano scales, Hiroshi Okubo really stimulates the senses, simultaneously soothing listeners while building up tension. Shinji Hosoe fittingly marks his long-awaited return to the series with the first stage theme "Highride". It's the hard-edged electro one would expect from the Sampling Masters team, complete with the occasional boisterous voice sample and car sound effects here and there. However, the production values are higher than his previous Ridge Racer works and it is more accessible too. A true collaborative album, the other Sampling Masters artists also make appearances. Saso's "Warp Trooper" is one of her wildest and hardest contributions to date, though it's surprisingly appealing too, while Aihara offers a sensual fusion of jazz styles on "Vanishing Horizon". sanodg's "Chromo Drive" is less accessible than his previous works on the series, reflecting his recently acquired fascination for minimalistic electronica, but builds into something big. The big four have evidently proved themselves worthy of a return to the series.

Plenty of other favourites from the current Namco sound team also make contributions to the album. Pleasingly Kota Takahashi managed two contributions to the soundtrack, contrasting colourful twilight grooves in "Night Stream" with the intentionally more artifical sound of "Synthetic Life". Asuka Sakai offers an interesting variation on her sexy RR4 approach with the employment of gritty saxophone leads in "Light Groove" and it is spectacular in context. There are also a few more typical techno tracks on offer; Koji Nakagawa engages in a collaboration with the sound director on the quiet and slow-building "Tek Trek" whereas Tetsukazu Nakanishi marks his return with the tight rhythms of "Tunnel Visionary". Of course, Okubo has a little more to offer too with the eccentric rhythms of "Disco Ball" and wild vocals of "Bassrider", though they're not among the best of the soundtrack. Perhaps the most remarkable and quirky entry is Yu Miyake's "Pulse Phaze", which shows what might happen if a katamari rolled on to a race track and picked up a tonne of electronic noise! While Kieki Kobayashi only manages a short introductory track, the other series newcomer Junichi Nakatsuru makes a big impression with the beautiful jazz fusion ending theme "Beyond".

The second disc opens with a series of exclusive remixes from the first three Ridge Racer games. Though it remains a select taste, Hosoe's latest remix of "Rotterdam Nation" is probably the best to date. In many ways, it reverts to the remix in the very first Ridge Racer album, incorporating even the hyper-accelerating section. However, the sound quality is better, the beats are harder than before, there are more worldly influences, and fortunately a slight reduction in the emphasis on voice samples. On the contrary, Saso's "Drive U 2 Dancing" also makes the most of modern technology to actually add vocals to a previously instrumental track. While the voice samples are still incorporated in a random way, they're much less irritating and cheesy than those from the mid-90s. Paralleling his work on the Technictix Remix series, Aihara rescues "Blue Topaz" — a complete mess back in Rave Racer — by elaborating on the jazzy features of the original and giving it a melodic core. Other highlights include Sano's overdriven super-fast remix "RareHeroes" and, to show what would happen if the harsh and smooth eras of Ridge Racer were to collide, Nakanishi's transformation of RR4's "Motor Species".

The soundtrack ends with a series of classic tracks that provide a tour of the series' musical history. Listeners can check out the series' murky funk origins with Ridge Racer's title theme, how Sano first mesmerised listeners with Ridge Racer 2's "Grip", or how Saso's retro homage "Euphoria" sounds even more nostalgic all these years later. However, most of the focus is on how the then-new Namco sound team transformed the series' music with Ridge Racer Type 4 and Ridge Racer V. From RR4, listeners get to admire how Takahashi and Sakai brought sassy jazz to the series with "Naked Glow" and "Your Vibe" or how Okubo used *shock, horror* real vocals for the amazing final stage theme "Movin' in Circles". Some will find the transition to Miyake's hard breakbeats on Ridge Racer V's "TsuiTsui" difficult to stomach, but fear not for Takahashi's "Samurai Rocket" and "Daredevil" end the soundtrack on an exciting and uplifting note, the latter a high energy rocking vocal theme. Note that the only exclusive of the original side is Hiroshi Okubo's "Silver Stream", a downtempo piano-supported track from the unreleased Rage Racer soundtrack. Overall, it's a worthwhile compilation for those looking to decide which of the series' soundtracks to focus on next.

Ridge Racers Direct Audio is the album to try for those looking to get into the Ridge Racer series. After all, it features all the artists and styles of the series dispersed across two jam-packed discs. The first disc is a high quality score in its own right and ranks among the series' best. However, the second disc is also invaluable since it offers a tour of earlier soundtracks in the series in the form of classic tracks and exclusive remixes. This will allow people to decide which Ridge Racer soundtracks to go for next, whether the hard-edged early works of Hosoe and co. or the most artistic soundtracks for Ridge Racer Type 4 and Ridge Racer V. Either way, this audio collection should offer something for every electronica fan.