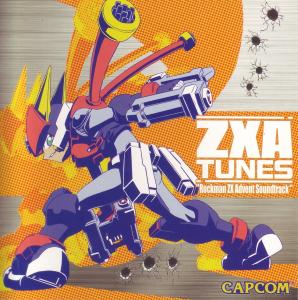 III, the sound create unit for Inti Creates — developers of the Mega Man Zero and Mega Man ZX series for Capcom — has been one of the most consistently solid music composing teams in gaming recently. Their remastered tracks have taken the GBA and DS tunes to much greater levels of sound quality while adding complementary riffs and layers of sound to flesh out the already impressive pieces. Both Physis for MMZ4 and ZX Tunes for MMZX were standouts in their library, elevating the pieces from Zero 4 and ZX to masterful heights. Unfortunately, the newly-released ZXA Tunes for the upcoming Mega Man ZX Advent does not reach such heights.

The strengths of previous III albums have been both the highly enjoyable compositions and the boosted sound quality. In the latter department, ZXA Tunes scores big. Nearly every piece sounds crisper and fresher. Compare pieces like "Slam Down" and "Rush Trash Squash" to their DS counterparts &]#151; the static is gone, while the melodies hit hard up front. Other pieces such as "Target Chaser" and "Oriental Sentinels" benefit from the addition of actual electric guitars to augment or arrange their melodies — the second piece in particular gains from the guitar in a small solo followed by a smooth layer atop its final riff. ZXA Tunes does not disappoint in its production values.

Where ZXA Tunes does disappoint is its piece library. Most of the pieces aren't that bad... yet they aren't very good either. "In The Wind" and "Brimstone" contain almost identical chord progressions and simple melodies — in fact, about a third of the pieces in ZXA Tunes share a similar chord structure. This wouldn't be a problem if the pieces built on them were solid. Mostly, though, the melodies are repetitive without being interesting or diverse without being distinctive.

There are hints of greatness sprinkled throughout — the energetic synth leads of "Through the Lightning" and "Destiny" make for great intro stage pieces, while "Bullet Drive" and "Overloaded" feel perfectly suited to their engaging stages. The aforementioned "Oriental Sentinels" has an enjoyable eastern Asian flavor. Finally, "Rockman a (antique) Remix" is a deliciously audacious 8-bit amalgamation of "Green Grass Gradation" and "Rockin' On" from the previous MMZX.

However, many other pieces fail to capture attention so well. "Go For It!" suffers from a lead vocalist who sings about an octave below where she ought. "Flashover" is almost cacophonous. "Slam Down" is edgy, yet it tends to whine and is far too ruthlessly simple for a boss track a major letdown compared to, say, "Nothing Beats" from Mega Man Zero 4. "Divine Hammer" is equally uninspiring for the final fight. The majority of the remaining pieces feel merely acceptable. While acceptable is just that, it is not exceptional — a level III has achieved before.

It is hard not to be disappointed with ZXA Tunes, considering its formidable precursors. The album is capable enough, but it lacks the overwhelming drive of Physis and the incessant catchiness of ZX Tunes. Inti Creates should be proud that it has a sound team whose lesser projects produce merely capable music; but after displaying excellence repeatedly in the past, there is only hope that III will amaze again in the future. On ZXA Tunes, they have only shown decency — a trait uncomfortably low for such artists.

"Go For It!", "Be One", "Mirai e Tsuzuku Kaze" ("A Wind Blowing Towards the Future")
words by Yuki Terakado