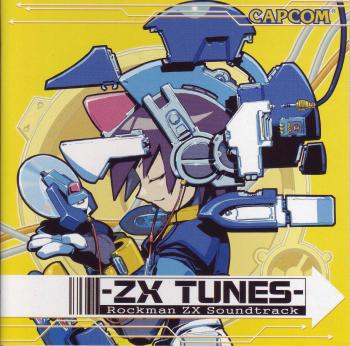 The in-game music for Mega Man ZX was good. Rockman ZX Soundtrack -ZX Tunes- is better. A lot better. As well it should be, as it's an arranged upgrade of the original music. Hearing the music from ZX was like a throwback to the lively and upbeat scores of the original Mega Man scores, as opposed to the Zero games, which felt more like a throwback to the rock and futuristic sound of the X games. Unfortunately, the sound quality of the ZX DS soundtrack was holding back the potential in the actual music and we just can't have that. No more! With Rockman ZX Soundtrack -ZX Tunes-, the arrangers step in, put their feet down, and let you know that this music is simply too good to be overlooked due to poor synth and muddy bass sounds. III has done a strong job upgrading the Rockman Zero scores, but working with the upbeat and driving score to ZX, they have truly unlocked its full potential in this album like few arranged albums have done.

I feel like I did listening to the Ys IV Perfect Collections or Phantasy Star Collection 1 for the first time... Really, this album is much like them, except replacing "dark fantasy RPG" with "futuristic action Metrovania". I always said the Ys series sounded like Megaman music done right, but in an RPG... ZX Tunes is just Mega Man done right, period. I've always heard flashes of brilliance in the Remastered series (namely, the rock tracks and some of the funky stuff like "Ice Brain"), but they've absolutely nailed the drum programming for this one and nearly everything is perfectly arranged. It's the perfect offspring of the rich melodic 80s synth-pop/rock of classic Mega Man and modern electronic sounds. With a combination of drum samples and strong techno in the background and much synth and electric guitar to handle the already excellent lead melodies, ZX Tunes isn't going to surprise the listener in anything but its consistency.

I'm glad ZX's core compositions were largely more happy and upbeat than the prior Zero games from Inti Creates because, musically, there weren't able to put together anything serious or emotional that even approached being effective. Right off the bat, this eliminates needless filler from the score. More than once, it reminded me of Perfect Collection Ys IV Vol. 1 and tracks like "Puromarock". This is demonstrated by my favorite track and arguable the standout track on the album, "Brilliant Show Window", with its' strong synth leads, driving percussion and well-placed guitar solo. It's an anthemic throwback to the glory of old-school Megaman music and is straight-up blissful to listen to. It's not alone either, as "Sky High -Grand Nuage-" pulls off the same thing just as effectively.

ZX Tunes doesn't quite rock the speakers like Physis does (constantly), but it offers plenty of that quality rock too. To name a few, "Pallida Mors", "Ogre Claw", and "Rockin' On" (with a name like that, it BETTER be good... and it is). "Gauntlet" is a blistering guitar melody built overtop a strong, established underlying riff. Tracks like "En-Trance" and "Green Grass Gradation" show off the arranger's ability to lay down smooth techno beats, but have enough sense to allow the melodies room to breath. The result is absolute heaven in a sea of so much emotionless electronica found in today's VGM.

Rockman ZX Soundtrack -ZX Tunes- is an album that doesn't surprise the listener, but pulls itself off with so much character, it quickly establishes itself as a quality and consistent listen. It has a couple of dull tracks nestled amount the strong line-up (mostly found towards the second part of Disc One), but nothing that offends and is more overshadowed by the surrounding pieces. It's "gamey", but some of the best quality "gamey" I've heard and the modern flair is very apparent, but not overused. It's melodic synthpop of the old-days first, modern electronica second, and that's the way the pecking order should always go (hear that, Phantasy Star Online?). I think III has finally nailed their arrangement formula to perfection... Now if they can just apply it to some "classic" Mega Man music, we're definitely in business. But for now, we'll just have to look forward to Rockman ZX Advent Soundtrack -ZXA Tunes- down the road.

Inti Creates — developers of the Mega Man Zero and Mega Man ZX series for Capcom — is very fortunate indeed. Such a small company boasting such an incredible sound team is beneficial beyond belief — and it is this sound team, III, that consistently improved on each Mega Man Zero soundtrack and its remastered counterpart. The leap to the ZX series brought with it a slight change to the musical style, but III met the challenge — and how! Now, the ZX soundtrack has been remastered with amazing success on ZX Tunes. Overall, it's the best soundtrack yet to come from III — as well as one of the best soundtracks ever to herald a Mega Man adventure. In fact, it's one of the peaks in synth rock itself.

The remastered tracks for the Zero series gave the GBA pieces much better sound quality and remixed many of them to greater effect, adding complex guitar and keyboard solos or additional instruments to further their harmonies. ZX Tunes handles both quite well. Listen as "Brilliant Show Window" and "High-Press Energy" lose the static of the DS sound system and blast through the speakers with keyboards rocking. Enjoy highlights like "Rockin' On" and "Sky High - Grand Nuage -" refined to brilliance with electric resonance. Almost every piece has been refined to sharpen its melodies and augment its atmosphere. The only slips come when III inexplicably uses the occasional grating keyboard effect — sprinkled throughout "Green Grass Gradation" and "Snake Eyes" amongst a couple other pieces. Otherwise, the high-powered synth style and much-welcome actual electric guitars give the album a backbone and body not found often in soundtracks.

While the sound quality is high and the mixes are appreciable, it is the fusion of those elements with ZX's standout soundtrack that secures ZX Tunes as a masterpiece. The Aile disc — the first of two — displays quite a number of highlights. The opening level theme, "Green Grass Gradation", boasts one of the catchiest melodies available and sets the tone for most of the soundtrack with its multiple keyboard sections. "Brilliant Show Window" for the city setting is a major-key wonder akin to olden Mega Man 2 pieces, jumpstarting itself again through the bridge and ending with melodic guitars. "Wonder Panorama" enhances the underwater Area F via a beautiful synth rock arrangement, switching from powerful dual harmonies to a soothing female vocalist breathing the piece the second time around. "Industrialism" from Area E showcases the bass instead, towing along the simple leads as if by will alone. "Sky High - Grand Nuage -" is a delightful and bright piece conveying the hope that unifies the Guardians. "Danger Attraction" plays off the theme park vibe in Area H while rambling nicely between leads and chord progressions, ultimately to end up where it started. "Misty Rain" stuns for a Mega Man piece yet fits within the rainy degradation of Area I, carrying Vent and Aile along with a peaceful piano contrasted by the rapid-fire static pad signifying the overwhelming danger of the power plant. The Aile disc also contains one of the two standout cover pieces. "Black Burn - Electpital Dance -" transforms the serious, heavy original (featured on the second disc) into a technologic dance led by an unsolvable, unyielding voice. This first disc is sure to please with the quality and quantity of awesome pieces being so high.

The Vent disc is also a pleasure and a joy. It kickstarts the adventure with the other fantastic cover piece. "High-Press Energy - Super Aniki Edition -" plays off the original (found later) over into a superhero theme, with the energetic boy eager to blast with his "ROCK BUSTER!!!" "Mountain Rider" is the irresistible piece for Area B, bouncing through the work zone with a guitar backed by a smooth riff and brass fanfare. "Ogre Claw" is as ferocious as the fires of Area G, with intriguing electric guitar effects. Perhaps the best section of the entire soundtrack, though, comes up next with the back-to-back velocity of "Rockin' On" and "High-Press Energy" as the boss battle theme and piece from Area K. "Rockin' On" justifies its title with fantastic guitar work and a blazing BPM. It easily gains the most from being remastered, allowing the keyboards and drums also to attack relentlessly. "High-Press Energy" is meanwhile intensified by shredding, stronger sound effects, and a wild ending that knocks out the speakers and seizes the eardrums.

Not to be overshadowed is "Gauntlet" for Area L, handing out heaping doses of melodic catchiness and giving generously with its own wild ripper of an ending. "Trap Factory" revels in being the battle theme versus the sadistic Prometheus and Pandora, mocking with a chilling piano before lashing out with a keyboard barrage. "Black Burn" chills the room down upon entering Area O, sensing the desperation the heroes feel within the despair of the looming destruction ahead. "Snake Eyes" provides one last catalyst for the fight in the final area, hauntingly hitting with deep vocal pads. "Pallida Mors" unleashes that fight with chaotic yet driving synths, backed up furiously by an unintelligible growl. Finally, after the battle is won, the pleasant and boppy "Dream Weaver" plays a relaxing acoustic tune to celebrate victory and reclamation of peace. The Vent disc completes what the Aile disc began well, and together the two form an astonishingly enjoyable soundtrack.

Rockman ZX Soundtrack -ZX Tunes- is definitely a work of excellence. Crisp sound quality brings out the strengths of the original pieces; mixes and remixes elevate their compositions; all at once create a work majestic. III has never been better, and their brilliant music is a treat indeed. So many albums aspire toward perfection. Of course, ZX Tunes doesn't reach it — but it almost grabs on. This is an album for the ages — in a word, legendary.