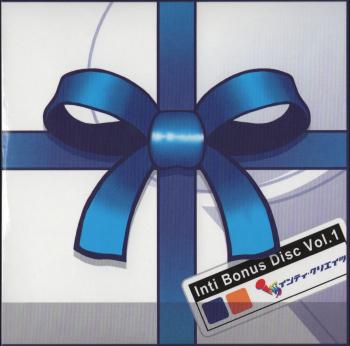 The Inti Bonus Disc Vol. 1 was a pre-order bonus for those who ordered the Rockman 10 Original Soundtrack through the Capcom store online. Featuring many themes from the Mega Man Zero series as well as some arranged themes from Mega Man 9 and Mega Man 10, is it a worthwhile bonus?

The album opens with "Rockman 10 Title -Arrange Version-," arranged by Ryo Kawakami, it features a nice synth rock base and really brings a bunch of energy to the original chiptune theme. The second theme, "Nitro Rider - 2A03 Chip Rock mix," an arrangement by hally of "Nitro Rider," from Mega Man 10. It opens up with some vocal samples before moving into a house beat that also throws in the chiptune melody. It's an interesting remix for sure and really combines the essence of modern and classic. The third new arrangement on the bonus disc is "Rockman9 8boss Stage Non-Stop Mixture" is a remix of all the chiptune versions of the robot master themes from Mega Man 9 with a nice electronic beat. It's pretty interesting and surprising how well the different pieces flow into one another.

The fourth arrangement, "Chiptuned Rockman Magnetic Piece Edit," is essentially the promotional music that was released prior to the release of the Chiptuned Rockman album. It features a small preview of all the remixes on the album, one after another. It's definitely interesting, but so uncohesive that it's really heard to appreciate. It's better to just get Chiptuned Rockman and listen to the pieces in entirety. The next theme, "Galaxy Fantasy," comes from the Rockman 9 Arrange Soundtrack. It definitely features an 80's vibe to it and is an arrangement that brings together some nice elements, like futuristic sound effects, vocoder usage, and a nice synth melody. It's one of the arrangements that sticks closer to the original, but it's quite entertaining nonetheless. The last of the more recent Mega Man themes is "Thunder Tornado," which is taken straight from the Rockman 9 Original Soundtrack. It's a very energetic theme with a fantastic melody and a jazzy touch, but its also one of my least favorite stage themes from the game.

The rest of the bonus disc comprises of music in the Rockman Zero series. "Esperanto" from Remastered Tracks Rockman Zero Physis, is a very bubbly synth rock piece that has a very beautiful atmosphere combined with some engaging synth lines. I love how the piece varies as it progresses and the new elements that are added from time to time, such as the piano, help keep it fresh. "Caravan - Hope for Freedom," also from Remastered Tracks Rockman Zero Physis, is a theme that is definitely hard rock theme in natured. Powerful guitar riffs and lead guitars help create a forceful atmosphere and the melody is quite nice as well. The synth sections, although brief, help give it a bit of character, but it's one of those themes that are there purely for the adrenaline rush.

"Break Out," from Remastered Tracks Rockman Zero Telos, is another rock-based theme that features a fantastic melody. Combine that with a bit of a mysterious menacing sound and you have quite a nice theme. It definitely has more character, despite the limiting instrumentation, than "Caravan - Hope for Freedom." "Departure," from Remastered Tracks Rockman Zero Idea, is a synth rock theme that features some pretty interesting distorted guitar riffs. However, most of the theme focuses on synth leads and they help give the melody a bit of softness to them. It's still quite a nice theme overall though. "Theme of ZERO," from Remastered Tracks Rockman Zero, is a nice updated version of "Theme of Zero" from Rockman X. The fuller instrumentation and the updated synth give this theme the soundscape it deserves. "Area of ZERO / Theme of ZERO," from the same album, is a beautiful ambient theme filled with a nice industrial beat and some gorgeous piano work.

Lastly, "Innocence" from the Rockman ZX Soundtrack -ZX Tunes- is a vocal theme. Featuring the vocalist CAO, it's an upbeat synth rock theme that fits well with the Rockman universe. The vocalist has a very beautiful voice and suits the electronic, rock, and orchestral offerings that the theme features.

In the end, was it worth picking up this bonus CD? Well, aside from the few arrangements featured at the beginning of the disc (namely tracks 1-3), the majority of this bonus disc can be found on other Mega Man albums. Depending on how avid a collector of Rockman music you are, you might find this purchase a bit unwarranted. However, if you are unfamiliar with the music of the III sound team, this might be a good way to get introduced to their style for their contributions to the music of the Rockman series. It has a bunch of enjoyable music, with only the Chiptuned Rockman preview being the weak link.