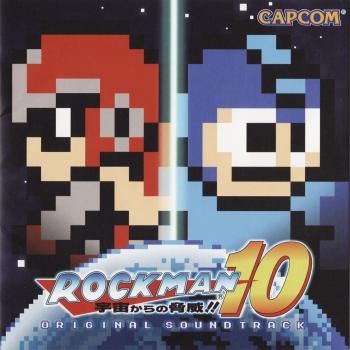 Given the success of Mega Man 9, it was only natural for Capcom to produce Mega Man 10. The team behind the Rockman 9 Original Soundtrack, III, led by Ippo Yamada, reprised their role as composers for the soundtrack. However, they were they able to outdo themselves this time? Well, that's a matter of discussion. "Why?", you might be asking yourself. Well, that's because the fantastic robot master stage themes composed for Mega Man 9 aren't handled by the same team. Rather than having III create the entire soundtrack, Inti Creates hired the majority of the composers who composed for the classic series in its previous life, ranging from Mega Man and Mega Man 2 to Mega Man & Bass and Mega Man 8. Given the addition of these famed composers, does the Rockman 10 Original Soundtrack live up to the previous soundtracks in the series? How do III's contributions compare?

The most important themes to the RMega Man series, in my opinion, are the themes for the robot masters' stages. Each composed by a veteran member of the series, there is a wide variety of styles featured and it also provides an interesting interpretation of their ideal Rockman sound. Akari Kaida, composer of Mega Man and Bass, contributes Blade Man's theme, "King of Blades." It's a rather interesting theme that features a slower A section that hints at menace, before moving into this undeniably catchy B section that just oozes that classic Rockman sound. It's easily one of my favorite themes on the soundtrack, although I've read many opinions that think otherwise.

The next theme belongs to Pump Man's stage, entitled "Polluted Pump". Yuko Takehara, composer of Mega Man 6, offered a more subdued theme that features a menacing sound. Throw in some awesome bass line accompaniment and some great chiptune accents and there is definitely another winner on the soundtrack. "Desert Commando," the theme for Commando Man, is composed Minae Fujii, who composed part of Mega Man 4. In terms of style, this one is definitely one that sounds like classic Mega Man. It features a fantastic melody, some great chiptune percussion work, and some delightful countermeloies. The atmosphere is definitely less brooding than some of the other themes, but manages to capture the classic Rockman sound. "Absolute Chill," Chill Man's theme, is contributed by Shusaku Uchiyama, composer of Mega Man 8. To me, this theme captures the essence of an ice stage quite well. It's a very catchy theme full of nice crystalline chiptune sounds, some very interesting percussion work, and some great atmospheric touches.

Mari Yamaguchi, composer of Mega Man 5, contributes "Cybersheep's Dream," the theme belonging to Sheep Man. This theme is extremely playful in style and features some great harmony to go alongside an extremely infectious melody. This is another favorite of mine and it fits the electric themed stage quite well. Next up, we have "Fireball Strike," the theme for Strike Man. Composed by Makoto Tomozawa, who composed part of Mega Man 7, it's a theme that, to me, is the weakest of the robot master stage themes. There are a few reasons for this. Although fitting for the sports related nature of the stage and boss, the B section of the theme, a victory fanfare of sorts, doesn't really manage to engage this listener entirely well. The A section, on the other hand, is superb. Unfortunately, it sounds awfully similar to "Thunder Tornado" from Mega Man 9, and although it's a fantastic melody, I don't find it particularly inspiring, for that very reason. I swore it was composed by Ippo Yamada, who wrote "Thunder Tornado," before learning that it was a classic composer's contribution.

Manami Matsumae, the mother of Rockman music, contributes Nitro Man's theme, "Nitro Rider." Out of all the contributions, this is the one with the most classic Rockman sound. It's an energetic theme with a fantastic melody and the various accompanying synth lines and the variety of melody line synth sounds is superb. Manami Matsumae is out to prove she still has it in terms of chiptune style music and she succeeds wonderfully. The last robot master theme belongs to "Solar Man." Composed by Yasuaki Fujita, composer of Mega Man 3, it is another one of my favorites. The strongest feature of this theme is definitely the bass line. It's menacing and powerful at times, while at others it is more upbeat. The melody also helps to match the various atmospheres present in the theme. In the end, this theme stands out as one of the strongest contributions to the robot master themes and really showcases.

As for the rest of the soundtrack, it's composed the III sound team. When it comes to Mega Man, the robot masters' battles and the music featured during fights in Wily's Castle, and for Wily himself, are also quite important. "Boss" is a much more successful composition than that of Mega Man 9. It features a menacing atmosphere for the majority of the theme and the harmonies are wonderful. I also love how it becomes heroic for the last few seconds before the loop. "Dr. Wily Stage Boss" is also quite exhilarating. Continuing with the menacing sound heard in "Boss," it also adds an energetic melody that definitely places an emphasis on action. "Dr. Wily Machine," on the other hand, isn't as strong as the Mega Man 9 rendition. That being said, it's still quite strong and features a very heroic atmosphere with hints of menace. "Dr. Wily Capsule," the last boss theme of the game, is fantastic. Featuring a frenetic atmosphere with some great percussion work and a strong melody, it serves as a fitting final battle theme. The loop is short, but what's there is quite powerful.

Of course, throughout Mega Man history, the Wily stage themes have always been fan favorites. Fortunately for them, Mega Man 10 features some of the strongest Wily stage themes to date. "Silent Rain" is one part of the Wily Stage 1 themes. It's a bit of a misleading theme, given it is played during the initial moments of the stage, before you even enter Wily's castle. It's a very mysterious and ominous theme with a minimal emphasis on melody; it fits perfectly with the pouring rain as you traverse the distance to the entrance of the castle. The true Wily Stage 1 theme, "Abandoned Memory," continues with the tradition of offering some fantastic high energy music that most Wily Stage 1 themes are known for. It's frenetic, features a fantastic melody, and even manages to throw in one of the themes from Rockman 9 right before the loop. "Against the Pressure," the Wily Stage 2 theme, features a more menacing atmosphere, but manages to throw in some more lighthearted moments throughout the piece. The high energy of this piece is also apparently and the melody is definitely one of the strongest on the soundtrack. I'm also quite fond of the percussion work.

The third Wily Stage theme, "No Turning Back," changes the atmosphere a bit. While it still features an extremely catchy melody, the tone of the piece is much more futuristic and spacey than the more action-oriented themes prior. The harmonies and the percussion also go hand in hand and really make this theme stand out. In fact, I find myself listening to the harmonies more than the melody itself on this one. "Stairway to Darkness," the fourth Wily Stage theme, slows down the pace considerably. Rather than focus on the high energy themes heard previous, it opts for a more ominous and mysterious tone. There isn't as much a focus on melody, but the mood of the piece is one that fits well as you draw near the end of Wily's Castle. Lastly, "Deep in Space," the final Wily Stage theme, continues with the mysterious tone heard in "Stairway to Darkness." The focus on melody returns and offers a very melancholy sound, but the futuristic tones heard in the accompaniment give it a very space-like vibe. In the end, it signifies the end of Rockman's journey to thwart Wily and manages to capture the impending danger.

There are also some special themes featured on the soundtrack that are included in downloadable content released for the game, mainly in regards to some special stages that aren't part of the core experience. "Endless Struggle," the music for the Endless Stage, features a rather repetitive theme with some electronic accents, but for the most part, it gets tiresome to listen to after a while. The other three themes belong to the stage themes featuring the Rockman Killers from some of the Gameboy games in the series. The first, "Heart of Enker," features a pretty catchy bass line and the melody is pretty strong too. The percussion really helps emphasize the melody as well. The second, "Get the Punk Out," on the other hand, is a bit more frenetic than "Heart of Enker." The atmosphere is also a bit more on the ominous side as well. The harmony here is what makes this theme, in my opinion. It just works so well with the lead melody, resulting in a theme that entwines two ideas quite nicely. Lastly, "Farewell to Ballade" is a much more subdued theme. The main draw with this theme is the atmosphere. The melody is extremely well crafted, but I think the slower tempo of the theme really makes this theme stand out.

Having listened to this soundtrack numerous times, both in-game and on a standalone basis, I must say that I enjoyed this album more than even the Rockman 9 Original Soundtrack. Do I think it is better ultimately? Not entirely. There are some themes on there, such as "Fireball Strike" that clearly sound uninspired, but at the same time, most of the themes contributed by the classic composers really help give it a very different atmosphere than its direct predecessor. For that reason, the varieties of unique composer styles help give this soundtrack an identity of its own. III also contributes some of the strongest Wily Stage themes to date and manages to encompass their sound heard in Mega Man 9. In the end, it's a very enjoyable addition to the Rockman series, but it may take multiple listens or a playthrough of the game to fully appreciate the music heard on this soundtrack, since it is a bit different from any other classic Mega Man soundtrack.

ALL CAPCOM STAFF
AND ALL INTI CREATES STAFF