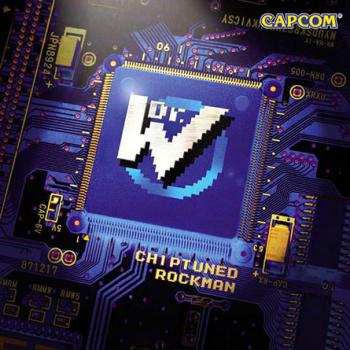 In 2008, after the release of the chiptune soundtrack for Mega Man 9, a controversial arrange album for that soundtrack came out, comprised primarily of III members. This year, another arrange album was put out, focusing on the older games in the series and some of the spin-offs with an interesting twist. That twist, of course, was an album entirely comprised of chiptune remixes by prominent Western and Eastern chiptune artists, both professional and doujin. How does this album fare and given the fact that many of the themes were already in chiptune form originally, is this album a bit redundant?

Since this album is features both doujin and professional artists, I'll be splitting the review that way. To start, "Tornadoman (Integer Spin Mix)," by Virt, opens up the arrangement note-for-note like the original, but then it goes into a diverse chaotic frenzy with imitation police sirens, explosions, etc. It's pretty damn awesome. From there, it goes in an interesting blend of the original chiptune melody and some awesome improvisational chiptune melodic accompaniment. Perhaps the most interesting theme of all is that the bridge includes a brief, chaotic medley of previous NES Rockman themes. Overall, this is a fantastic arrangement and it really sets the bar rather high. "Slashman Stage (Dot Matrix Dinosaur Mix)," by K ->, has a strong electronica influence, done entirely in chiptune yet with a trance beat mix going on. I also like the semi-Latin flavors I hear in portions of the remix. This is another fun mix and a great take on the original.

"Mercury Stage (Light Shuffle Mix)," by Saitone, is a great mix as well. It's both fun and bubbly, yet at the same time, there are definitely some industrial tones to it as well. The erratic nature of portions of the mix really reminds me of Saitone's equally crazy Psyvariar The Mix offering. In the end, this is another fantastic arrangement by Saitone. I hope to see him on future albums. Zinger's arrangement, "Gravityman (Aftermath Sleaze Edit)," opens up rather mysteriously and, despite the chiptune nature, has a very smokey atmosphere to it. As it progresses, it features some pretty groovy beats and accompaniment. In a way, I can hear the sleaze, as the title implies, but it's a sleaze that you really want to enjoy and not shy away from.

KPLECRAFT decides to tackle Mega Man 3 with his medley "Opening, Snakeman Stage (2A03+VRC7 mix)". The introductory "Opening" is practical the original before moving onto "Snakeman". This portion features some awesome mixing. The original melodies are layered and slightly delayed and the chiptune sounds are slightly varied, leading for a very awesome mix. I loved his Psyvariar The Mix arrangement as well, but this one may just beat that. I also love how it ends with the actual opening of "Snakeman" rather than not including it at all. "Woodman Stage, Wily Stage 1 (Respect2dabeat Mix)," by USK, is a great medley from Mega Man 2's music. It's an awesome blend of chiptune melodies and chiptune hardcore electronica, something you'd hear in some of SuperSweep's more hardcore compositions. I also love how sexy "Woodman Stage" has become and how it seamlessly transforms into "Wily Stage 1". It's a great medley that showcases one of Rockman 2's most popular theme and one that showcases a lesser known favorite.

The professional arrangers also offer some interesting mixes. Ippo Yamada tackles a medley of themes from Rockman Powered Up. This arrangement, "Oilman Stage, Timeman Stage (200621978 mix)" features the two new stage themes created for the PSP remake of the original title. The first portion, "Oilman Stage," is a nice, mellow take on the original and features some interesting beats. The second half of the arrangement, "Timeman Stage," is much faster in pace and really gives it a very bubbly atmosphere. Akari Kaida decides to handle "Opening Stage (LSI-Babe Mix)" and I really like it. Sure, it doesn't get as crazy as some of the other arrangements, but it doesn't need to. It mixes this futuristic feel with a very classic sound you might hear in some of the older Mega Man titles. The beats are great and the various chiptune sounds work in unison to bring a very energetic arrangement to the table, yet at the same time, one that has a relaxing quality to it.

Manabu Namiki's arrangement, "Megawater_S Stage, WILY TOWER 4 (Area-2A03 Navy mix)," is absolutely awesome as well. The first half has a very "aquatic" feel to it and the transition from slow to fast within this theme is pretty nice. In addition, the whole melody is pretty awesome and the accompaniment helps give it that very bubbly feel. However, the best part of the arrangement has a more epic nature to it, which makes sense given the title. It's energetic, keeps the pace established in the first half of the arrangement, and really gives off a nice contrast in comparison to the first half. "Blizzardman Stage (DPCM'n Bass mix)," by hally, is an interesting drum and bass take on the original. The opening is really dramatic with its slow beats, but as it progresses, it definitely takes on a more energetic approach. I love how crazy the accompaniment gets at times and the various edits to the original melody. It definitely goes all out and I find it better than his Psyvariar The Mix arrangement, but it could also be because I'm more familiar with the source material. This one is definitely a thrill ride!

Ryo Kawakami's "Wily Stage 2 (Extended ChiProg mix)" is a pretty interesting progressive rock chiptune rendition. Sure, it's hard to catch the intricacies that one might expect from live progressive rock tracks, but if you listen carefully, you can definitely hear them. The bass in the accompaniment, the crazy keyboard emulated sections of the melody, and of course the percussion all gives this a very progressive sound. It's an awesome arrangement. Lastly, one of the composers to help create the Rockman phenomenon, Manami Matsumae, remixes one of her own themes. "Cutman Stage (Misty Mix)" is without a doubt my favorite arrangement on here. It's quirky, like Virt's, and really stands out. The original melody stands out almost untarnished, but it's the various things going on within the remix that really help propel this to my favorite. Whether it's that infectious beat that starts off the remix or the use of the Rockman death sound effect 10 times, in a way reflecting the difficulty of the game, has yet to be determined, but it's a fun romp nonetheless and one I could listen to without end.

This album is definitely quality stuff. The remixes are fantastic, thanks to the varied contributions from the arrangers. At first, I was skeptical, given the fact that many of these themes were in chiptune form originally, but I was surprised how diverse the arrangements were. You'll hear crazy and sporadic arrangements, those with clear electronic tendencies, and everything in between. If you didn't like the Rockman 9 Arrange Album and love chiptune arrangements, I highly suggest giving this album a shot. There wasn't a single arrangement that I disliked.