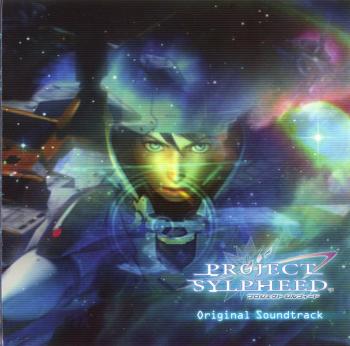 In 2006, Game Arts and Square Enix teamed up to provide a next-generation title in the Silpheed shooter series — the Xbox 360's Project Sylpheed. The companies went all out with the audio production for this title. Given the grandiose gameplay and futuristic setting, several composers crafted an electro-acoustic soundtrack that blended influences from electronic and cinematic artists. The score was also intended to be Square Enix's most technologically accomplished at that time and boasted some of the finest libraries and software. Led by Einhänder's techno composer Kenichiro Fukui, the score also featured atmospheric contributions from Junya Nakano, sentimental offerings by Kumi Tanioka, and some miscellaneous contributions by Game Arts' employees Takahiro Nishi and Keigo Ozaki. Much of the score revolved around arrangements of an exciting main theme and an emotional secondary theme, but was fleshed out with some other music. How does it fare as a stand-alone listening experience?

The "Project Sylpheed Main Theme" provides a compelling opening for the soundtrack. Following a cinematic orchestral introduction, the theme transitions into an exciting action track featuring bold brass melodies and infectious techno beats. The theme captures the sense of gliding through space while also conveying the excitement of the protagonists. The melody is derivative and the beats occasionally feel thin, but this is basically a very accomplished and memorable theme. The numerous arrangements of the theme range from the straightforward, such as the elated "Operation Nebula Blast" or climactic "Return to the Skies", to the more elaborate; for example, the ominously unresolved "Planet Lebendorf", heavily punctuated "ADAN Allied Forces", or minor key variation "Close Encounters: Intruder". The melody seems inappropriate in calming tracks such as guitar-focused "White Griffons" and orchestrated "Universal Order". Even more cringe-worthy is the end credits theme for solo piano. The theme seems completely unsuited for this purpose regardless of how many nuances the expressive performer and synth overlays provide. Overall, a good main theme that is too frequently and carelessly arranged.

Some tracks are reminiscent of Kenichiro Fukui's classic soundtrack to Einhänder such as the racing technofest "Interstellar Cruise Missile" or the boundless main theme arrangement "Declaration of War". However, most of the compositions are distinguished through their incorporation of ethereal and brassy elements inspired by space movies. Featured towards the end of the score, the edgy action tracks "Duel of Destiny" and "NATF-4 Deltasaber" are excellent examples of Fukui's electro-acoustic flair. They sound especially technologically refined too thanks to the superb synthesis and mixing of beats and brass. The weakest aspect of the album are the tracks used for subsidiary purposes. Takahiro Nishi offers two trios of strong rhythmically focused tracks that are heard in succession at the start and end of the score. The first trio comprises the ethereal electronic grooves in "Welcome to the Sypheed Operation System", tense militaristic rolls in "Hangar CVX-93", and a mixture of the two in "Tactics Briefing A". They get just the right mood across, but are rhythmically repetitive and melodically barren. The second trio is no better.

The most musically fascinating additions to the soundtrack were created by ambient game composer Junya Nakano. His first contribution "Transit Platform" is little more than slow five note brass motifs in conjunction with percussion backing and synthetic overlays; however, the rhythmical and timbral features of the piece are so unique — they ideally prepare gamers for a boundless journey into the unknown. "Sneak to the Frontline" and "Massive Battle #0015" are distinguished from Nishi's aforementioned tracks with their far more exotic palettes and sublime developments. Nakano is also responsible for the most tense and ominous creations on the soundtrack. "7th Special Operation Wing" gives a unique rendition on the main theme with its stabbing string motifs and intimidating hardcore and grunge influences. "Into Deadly Fire" is a psychologically focused compositions used in some of the final action sequences; the augmented chord progressions and ghostly ensembles transform the soundtrack into an utterly frightening one. "The Prometheus Driver" is an amazing portrayal of the enemy with slow intimidating cello motifs combining with fierce electronic beats and even a late-emerging soprano solo. Another fantastic offering!

Kumi Tanioka's contribution to the soundtrack was limited to one piece. She filled the short solo piano theme "Promise To Fly" with her characteristic contemplative and gentle tones. It was nonetheless arranged by her co-composers into quite a few other emotional compositions. The main arrangement of the theme is probably the best — introduced by piano and horn before moving into a genuinely sweeping passage. The melody is also featured in the choral title track, strings-based ending theme, and the multifaceted "Planet Hargenteen"; the latter moves through multiple sections composed by three different composers yet also elegantly comes together as a whole thanks to Keigo Ozaki's arrangement. A less convincing original composition is Nishi's "The Planet Acheron" for flute, piano, and strings; the end of the composition is dramatic and beautiful, but it's difficult to take it seriously when the preceding sections are so derivative and simplistic. Thanks to some effective explorations of the emotional theme for the game, there is a definite personal feeling throughout this soundtrack that is understated enough not to detract from the shooting action. It just seems unfortunate that there weren't more memorable melodies.

Project Sylpheed is an accomplished electo-acoustic score both stylistically and technologically. The music seems suited for a futuristic shooter with its blend of cinematic influences and techno styles. The score is also one of the most technologically advanced of Square Enix's scores and stands out for the way electronic and acoustic samples were cleanly synthesized and mixed by the composers and Mitsuto Suzuki. The highlights of the soundtrack are mostly centred on the arrangements of the main theme and the emotional theme. The constant reuse of these enjoyable but derivative pieces seems to indicate that Kenichiro Fukui and Kumi Tanioka had little time to offer a diverse set of compositions to the score. The remaining tracks tend to be rhythmically focused. Some like Junya Nakano's fascinating ambient compositions and Kenichiro Fukui's compelling techno tracks are welcome, but others like Takahiro Nishi's one minute wonders hold the score back. Overall, this is an accomplished score that will be especially enjoyed by fans of Fukui's techno and Nakano's ambience. However, it lacks somewhat in variety and substance.

10. Sneak To The Frontline
Composed & Arranged by Junya Nakano

28. Return To The Skies
Composed & Arranged by Kenichiro Fukui

34. After The War
Composed by Kumi Tanioka / Arranged by Kenichiro Fukui