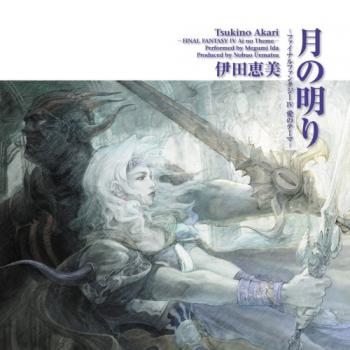 "Tsuki no Akari" is the vocal theme, sung by Megumi Ida, for the new version of Final Fantasy IV for the Nintendo DS. Based on "Theme of Love" from the original, Kenichiro Fukui was in charge of arranging this version for the game, while Junya Nakano, who as of late has been fairly inactive at Square Enix, was in charge of arranging the soundtrack. How well do they do interpreting "Theme of Love" in comparison to Uematsu's version also included here?

Before touching upon the vocal performance, I'll get the instrumental versions of "Theme of Love" out of the way. "Theme of Love," as it first appeared on the Super Nintendo, makes a reprise on this single. The track consists of woodwind, strings, and harp, and, while very simplistic, gives off very powerful emotions. It's definitely a favorite of mine from the SNES era. Nakano's arrangement takes the original to the next level. While keeping all the instruments in the original intact, he develops their involvement quite a bit. In addition, he adds a very Celtic sound to the piece. In fact, it sounds a lot like the Celtic Moon version. The harp definitely is a more prominent instrument within this arrangement and helps to accent the melody.

In Fukui's second arrangement of a vocal theme for a Final Fantasy game ("Kiss Me Good-Bye" being his first), I believe he excels once again and surpasses his previous arrangement. There could be a couple of reasons for this. One being the fact that "Theme of Love" is a much more solid melody, although both are good. The other being the fact that this composition was just begging for a vocal version. The composition itself relies heavily on strings and piano, however, woodwind sections are also heard, further reinforcing that Celtic feel that the DS arrangement had. Fukui, known for his keyboard work for the Black Mages, lends his piano skills to this song as well.

The singer's voice is fairly strong, in my opinion. While sounding a bit nasally at times, for the most part, Megumi Ida is really solid. Aside from Angela Aki and Emiko Shiratori, she ranks as my third favorite Final Fantasy vocalist. She is definitely a great choice for this song. Her voice seems to parallel the delicacy heard in the arrangement, but at the same time, helps reinforce the strong melody. Even with vocals, this theme is definitely a timeless classic. The karaoke version of this song is just the arrangement without the vocals.

Overall, I think this is an excellent single and a very powerful look into what the updated Final Fantasy IV soundtrack will sound like. Junya Nakano proves he is able to update a timeless classic with a more modern and fitting sound. Kenichiro Fukui shows his strength at arranging vocal pieces for the Final Fantasy series, and just like in "Kiss Me Good-Bye," he focuses more on simplicity and the vocalist's performance than lavish orchestration. Megumi Ida, who won the audition for the part, does a pretty good job at converting this classic into something even more memorable. This single is definitely a good thing to pick up. It shows the evolution of the "Theme of Love" and how a composition created in the early 1990s is still able to capture the heart of at least this fan.


The first print bonus was a dvd, containing these three clips: