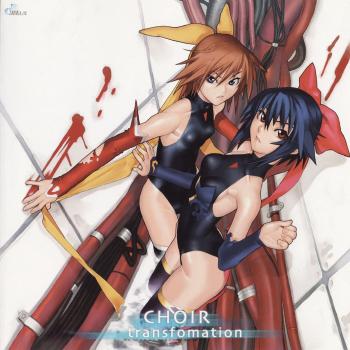 I was first made aware of this disc when Chudah had purchased it from CocoeBiz not long after it's release. At that time, I was really getting into Shinji Hosoe's music and Super Sweep. Just knowing that Hosoe was participating in this album was enough to warrant a purchase. Unfortunately, I got distracted by other albums and completing my Square Enix discography back then, so I never picked up the disc until recently. Imagine my surprise when discovering some of the most refreshing arrangements thus far. Not being familiar with Kenny K.'s original melodies seems not to be an issue at this point, as I can imagine that the original themes were pretty catchy and fun, as the Hentai/Bishoujo genre usually displays.

The first track, "original image song 'the one ai want'," arranged by Hisae Katoh, begins with some fine trance effects and some well-played synth passages, accompanied by an obligatory backbeat, and later the vocals appear in a rapid BPM (beats per minute) section. The blending of it all just works wonderfully and helps to create the right first impression on this arrange album, showing it full of fun, upbeat arrangements. Keiichi Okabe, who worked with Nobuyoshi Sano on some Tekken games, arranges the second track, entitled "day-to-day1 arrange 'pleasant days'." Its great guitar lines and slick electronic effects gives it a distinct futuristic flavour, and the vocorder used heightens the piece to a whole new level. I'm just a sucker for well-used robotic voices! The beat is steady, while the guitar, percussion, and vocorder all work together in providing one interesting arrangement.

Ayako Saso has the honor to tackle the third track, entitled "crisis arrange 'strange crisis'," which instantly gives off a feeling of uneasiness and danger. As the piece progresses, Saso speeds up the tempo a little bit and creates some interesting sections by layering synth and electronic effects over the piece. Takayuki Aihara has the fourth piece, which is labeled as a battle track; he not only uses synth and electric guitar to make the arrangement, but also has introduces his own styling of jazz and funk to give an interesting perspective on the melody. This creates an interesting effect as well as a solid mix of styles, which just work so well. The music only gets better from here on.

Masaharu Iwata of Ogre Battle and Final Fantasy Tactics fame shows up to demonstrate his diversity of musical styles with "decision arrange 'back and force'." He expertly uses the synth and bells to create the main melody and moves the melody forward with some improvisation on occasions. Yousuke Yasui's "day-to-day2 arrange 'memorial days'" can be simply described as "fun". The synth and guitar keeps it simple, and the melody is just lovely to listen to. That's all there is to it. Shinji Hosoe does an interesting arrangement at the start of the second half with "tender passion arrange 'dutchpassion'." This has trance passages and plenty of beats that are also backed by an electronic sound effect, which soon becomes hypnotizing due to their rhythm. The synth is used to great effect, as a new melody greets the listener halfway through, which is surprising change before it heads back to the original melody.

Keiichi Okabe returns with a more laid-back piece in "title arrange 'difference for you'." It starts with a gentle piano, until it switches to an electronic melody, which the piano squeezes its way nearly halfway through and creates an odd mix of instruments. The melody switches back to the synth but does not last as the piano keeps on coming back for more. Hitoshi Sakimoto, who is usually known for orchestral themes, shows up here and displays his versatility. His arrangement of "pathetic battle arrange 'distortion of the space'" features some delicious piano chords and some strings, but a techno backbeat plays the supporting role, while the melody develops to become exciting and mysterious at the same time. A choir join in at the end of the piece, which brings it to its climax. Indeed, it is easily one of the more interesting arrangements.

Manabu Namiki, usually known for shooter music, also provides an arrangement, this being "opening ~ final battle arrange 'fastest lateness'." It has interesting electronic effects, melded with synth, strings, and a steady backbeat. The melody gives off a decisive feel as you can imagine the character fighting for his or her life against the ultimate villain. The trance section near the end is particularly effective in conveying the mood of battle, which is the best thing the arrangement has. Shinji Hosoe closes the disc with his arrangement of the ending theme entitled "ending1 arrange 'good night...'." It immediately gives a conclusive sound, as the melody is fairly gentle with its slow beats and 'new age' vibe.

The Mahou Shoujou Ai 2 "transformation" Full Arrange Album is certainly one of the more pleasant discoveries as I aim to dig deeper within the electronica genre of video game music. Super Sweep and Basiscape seem to work so well together, so it is no wonder that they were selected together on many future arrangement collaborations. If you're into electronica, there are high chances you'll find plenty of enjoyable tracks.

original image song "the one ai want"
Lyrics: Go Oami
Vocal: Hisae Katoh
Album was composed by Kenny K and was released on August 15, 2003. Soundtrack consists of 11 tracks tracks with duration over about 55 minutes. Album was released by Choir.