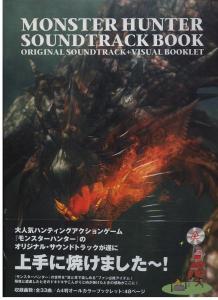 Monster Hunter was the first game in a very popular franchise dedicated to prehistoric quests such as monster hunting. On this project, Masato Kouda (Dungeons & Dragons, Wild Arms), Tetsuya Shibata (Devil May Cry, Power Stone), and Mitsuhiko Takano (The Legend of Zelda: The Minish Cap, Gotcha Force) collaborated to produce one of Capcom's most mature orchestral scores to date. The score almost flawlessly depicted the life of a monster hunter with its bold main themes and distinctive landscape, town, battle, and mini-game themes. The soundtrack was packaged with a 48 page book containing artwork from the game and detailed liner notes from the three composers. Is it such a satisfying listen on its own?

The soundtrack opens with the Monster Hunter main theme composed by Masato Kouda. The main melody is exposed with a warm brass fanfare and the luscious scenery of the game is subsequently introduced with swelling strings, light percusssion, and exotic woodwinds. Taking an ominous turn with a dissonant canonic take on the original fanfare, the theme gradually intensifies into an action theme with brass shrills, demanding progressions, and amazing percussion to depict the encounter with a wyvern. From 1:56, the theme is presented into the form of the march with contrasting grandiose and contented sections decorated with trilling flutes and fluttering strings. Overall, a wonderful cinematic piece to introduce the stylistic and thematic elements of Monster Hunter. The theme is arranged in a straightforward manner in the militaristic "To the Adventurers", the soothing "Triumph!", and the iconic "Last and Decisive Battle". These pieces help to reinforce the thematic material, but don't offer much new to the original and so can bore. More effective is its rendition in the ending theme "Proof of a Hero", which emphasises its emotional components more with orchestration by Shiro Hamaguchi and an extended development section.

The prehistoric landscapes of Monster Hunter are seamlessly supported by ambient music. Faint echoing samples, spiritual vocals, bird song, and noise of a waterfall are all that separate "Lands of Full Harvest" from nothingness. There are surprising and perhaps uncomfortable parallels with the approach of the later released Resident Evil 4 in other themes, mainly due to the use of the very distinctive library samples of "Serenity", "Ganado I", and "Infiltration" in "Beyond the Fog", "Land of Small Stones", and "The Great Waterfall". Nevertheless compositionally novel, the howling synth sample of "Beyond the Fog" creates imagery of a swamp in twilight with support by melancholy string melodies and bird song. The instantly ominous opening of "Land of Small Stones" was exactly what was needed to depict a formidable volcano, even if the rest of the theme is essentially atmospheric noise, while "The Great Waterfall" elaborates on the spiritual and tribal elements of the score with its expressive female vocals and subtle percussion rhythms. The most unusual elements of the themes is that they all metamorphose as compositions through new sections or to near silence. This would have been more effective with longer track times. Some themes are also rudely interrupted by the deafening roars of monsters...

Monster Hunter takes a distinctive approach to action themes as exemplified by "Howling ~ Lioleus". This theme focuses on synchronising several brass crisis motifs together, but it is always interesting due to the fantastic rhythmical thrust emphasised by the accompaniment and the bold timbres created by the effectively synthesized orchestra. Subtle variations of the approach are made throughout, for example "Poison Mist ~ Gereois" taking a more fluid and dynamic approach and "A Crack in the Earth ~ Gravimos" gaining individuality with its piano punctuation and experimental development section. Perhaps the best of the efforts is "Crimson Horns ~ Monoblos", which creates a ritualistic sound with its ferocious percussion, oriental woodwinds, and epic choral development section. "A Glint in the Eye" conveys the feeling of being surrounded by predators with its harp arpeggios, suspended strings, and clarinet utters used with utter efficiency. The final dungeon themes are also bold highlights. "The Moving Mountain of Sanctity" explodes after numerous unresolved brass fanfares and organ passages into "March for the Heroes", a brisk snare-driven chorus-dominated gem with the deepest development of all the action themes. Don't forget to check out the bonus promotional track "The Time Has Come" for more bombastic action.

Another highlight of Monster Hunter are the soothing settlement themes. "Awakening" is an absolutely gorgeous town theme featuring evocative pan flute melodies supported by acoustic guitar melodies and ephemeral spiritual vocals. Its primary variation "A Hero's Return" is also effective, emphasising the raw shape of the original melody more. "Beneath all the Stars in the Sky" and "Song of an Old Tale" are the most contemplative additions offering a heartrending violin and flute melodies supported by gentle harmonisation from guitar and whimsical ensembles. Other emotional highlights include "Lone Wolf", a rugged rasguaedo-supported guitar duet, and "The Gathering", a sedate presentation of the main theme with supporting renaissance instruments. Ancient and Celtic instruments are used in a mature way further in "At the Pub" and rather ridiculously in the thematically continuous "A Day in Town" and "Leather Boots and the Throng". "Scat Cat Fever" is the most outrageous of them all, however, featuring meows for the main melody — a select taste for sure. Rounding off the soundtrack are a few short but striking cues, namely "Reparations for an Error", "Preparations for the Last Farewell", "Burned It Good!", and "An Hour's Rest".

The Monster Hunter soundtrack provides strong musical foundations for the series. Its distinctive blend of warm marches, ambient soundscapes, bold action themes, pastoral pieces, and ambient soundscapes ensured a very fitting accompaniment to the game and, for the most part, a pleasing listen. However, between the monster roars, cat scats, conservative arrangements, and ambient themes, there's a little too much potentially unappealing here to make it a really recommended purchase. It's probably better to start with the Monster Hunter Hunting Collection ~3rd Anniversary Best Track~ unless you're a really big fan of the game.

Album was composed by Масато Кода / Mitsuhiko Takano / Тэцуя Сибата and was released on July 24, 2004. Soundtrack consists of 33 tracks tracks with duration over about 60 minutes. Album was released by Suleputer.