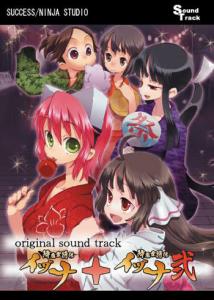 Izuna and Izuna II are a couple of DS RPGs developed by Success and published by Atlus dedicated to an unemployed female ninja. The soundtracks, written by a sadly uncredited composer, are one of the main appeals of the game and make the most of their console. While nothing ground-breaking, these soundtracks feature a fitting and endearing blend of RPG influences and traditional Japanese instrumentation. Success commemorated the mini-series with a joint two disc soundtrack release that is commercially available at several stores.

In writing, the title theme to Izuna features some of the most formulaic imitations of traditional Japanese music out there. There is an evocative bamboo flute lead, playful koto and percussion backing, and some soothing secondary string melodies. However, the pop-inspired melodies are so simple yet elegant that it is difficult not to find them memorable and endearing. In addition, the instruments are synthesized and mixed in a very emotional way, especially for the DS. "Opening" adopts a similar palette once again, but presents more introspective melodies to charming effect on-dualscreen. As the soundtrack progressions, there are various simple yet convincing twists on RPG music clichés through the focus on traditional instrumentation; whether the calming town music of "Kamiari Village", the adventurous anthem "Wind Corridor", or the rocking boss theme "Wild God", all the tracks work well in context while being a little novel too. It's also very clear in these tracks that a lot of focus has been placed on portraying the feelings of the protagonist, not just the Asian scenery. Fittingly, everything sounds very humble and youthful throughout, right up to the surprisingly no frills ending theme.

The most intense moments in the soundtrack are those for the dungeon themes. The music has to fit both the normal gameplay and battle scenes, so it has to be simultaneously atmospheric and upbeat. That said, the dungeon music changes depending on how far one journeys into the game. There is instrumental continuity in the shallow and deep themes for "Shakugan Cavern", but the former is a slow-building scene-setter whereas the latter is a rocked-up anthem. Maze of Gods even features four themes, each slightly more intense than the previous track. Despite the Japanese focus throughout, there is still quite a bit of diversity in the styles of the soundtrack. The "Tokofuyu Cave" themes are very mysterious, built entirely on strings from arco violins, pizzicato violins, and the koto in a rather minimalistic way. Though the "Zekuu Path" themes take a minimal approach too, their slightly more diverse instrumentation exudes a warmer sound that particularly blooms in the gorgeously soundscaped second theme and the highly melodic third theme for the dungeon. The last set of dungeon themes entitled "Singularity" are the most upbeat and rocking of them all to delightful effect towards the end of the first disc.

The second disc of the soundtrack is dedicated to the Izuna II soundtrack and it takes a very similar approach to its predecessor. However, there are some novel features. For example, the "Title" theme is faithful to its predecessor, but features more prominent use of Western strings and piano this time while the Japanese traditional elements are used as supporting forces. In "Shigen Meadows", the melody are presented in a louder and richer manner than before — first on flute, then on strings — despite its intrinsic shape being similar to themes on the Izuna soundtrack. "Kamudoi Shrine" is another example of the more dramatic approach to the soundtrack with its supporting chorus and piano decorations used to create an ethereal sound. Meanwhile "Kannagi Mountain" is one of the most rhythmically jagged and furiously toned dungeon themes in the series and has a vibrant effect in-context. Many of the rest of the themes sound so close to the Izuna soundtrack that they risk sounding generic, though it's clear a lot of thought and love went into each composition as the musical and technical quality remains good. The soundtrack nevertheless ends on a high note with the action-packed "Love and Hatred" and the feathery "With My Important One", both of them written with such understanding for Izuna's character once more.

In the end, the Izuna I + II Original Soundtrack is typical light-hearted RPG music given a traditional Japanese twist. Though the RPG and Japanese stylings are generic in themselves, they're quite appealing when blended together, at least in small doses. That's largely because of the endearing lyrical melodies featured throughout and the stylistic and emotional variety offered by the dungeon themes. The soundtrack risks boring listeners across two discs, given the contrasts between Izuna and Izuna II were relatively few, but there are still enough highlights to make it worth revisiting. It's wonderful that Success decided to present their offerings in such an accessible way too.

2 disc set featuring complete soundtracks of Izuna: Legend of The Unemployed Ninja and Izuna 2
Album was composed by Кэйсукэ Оку and was released on February 04, 2008. Soundtrack consists of 54 tracks tracks with duration over more than 2 hours. Album was released by SUCCESS.