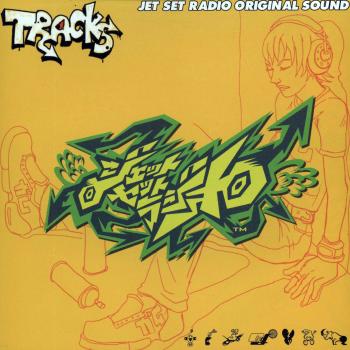 This review will focus on the score to the Dreamcast classic, Jet Set Radio, first released in August 2000. Because music plays such an integral part of the experience in this game, it is pretty hard to not notice the superlative music. It is one of those rare scores that I knew I liked it after only hearing the first 30-45 seconds of the individual songs. It is that awesome. This score is really a collection as while Hideki Naganuma dominates, there are selections from nearly a dozen other artists, my favorite being Deavid Soul. However, note that the soundtrack release is not complete and omits some of the best tracks, so this review will primarily focus on the in-game score.

Radio's score tackles many genres of music from trance to hip-hop to J-pop to dance to electronica and more. In the US version, there were even some rock and rap songs added to certain stages to round out the package. In seeking to represent many different genres of music, Jet Set Radio is a great primer for new listeners of these types of music.

A lot of the tracks have that inescapable J-Pop feel to them, what with the game being set in a futuristic Japan. The tracks by Guitar Vader are especially like this, with the infectious "Super Brothers" and "Magical Girl". These two tracks possess the energy that simultaneously attracts and repulses music fans, depending on your feelings on J-Pop. "Super Brothers" is the kind of song that seems annoying at first, but becomes catchier the more you listen to it. Take note, though, that neither of these are on the official soundtrack.

My favorite tracks gravitate toward the trance and electronica represented in Benten-Cho, the City of the Night. The standouts are "Miller Ball Breakers" and "Yappie Feet" by Deavid Soul, again not featured on the soundtrack release. The former is an odd title to be sure, but it goes perfectly with the environments of lights and dazzle. The track is very trance-oriented and, as a fan of Dune and Scooter, it is right up my alley. It just feels like the kind of song that anyone could dance to. "Yappie Feet" is another high-energy dance track, with a lot of positive energy that just makes the listener feel happy. Listen from 35 seconds to 60 seconds and you can't help but feel enthused.

Naganuma's tracks actually headline the soundtrack release albeit at the expense of most others. They're a solid collection, my favorites of his being "Rock It" and "Grace & Glory". "Rock It On" first plays in the initial stage of Kogane-Cho, the domain of Poison Jam. The tune seems to fit with their brutish personalities. Like the track title suggests, "Rock It On" is a Japanese rock song with a great groove, perfect for those looking for some energy in music. It definitely feels Japanese, with its familiar sound effects that were also found in Sonic Rush. "Grace & Glory" is like a complete opposite and sounds like it would fit well into an opera. It is ideal for the stage it is used, in which the player is on a giant turntable on top of the New Rokkaku headquarters. It is an imaginative stage, and the music fits it to a tee.

This superlative score is not without its low points however. "Moody Shuffle" is too repetitive to be worth listening to outside the game; it feels like a filler track compared to the other very inspired pieces from Mr. Naganuma. I also dislike the instrumental simplicity of "Patrol Knob" by Mixmaster Mike of the Beastie Boys. It is too basic of a track even when you consider its length, and it really feels like more should have been done musically in it. Keep in mind that I still enjoy listening to the above in-game. While listening to the album, I usually skip such tracks, as there are so much better ones in Jet Set Radio to look forward to.

Overall Jet Set Radio is one of the most definitive video game medley scores that exist. There really is music for everyone with tons of different styles for the listening. As an aside, it is probably best not to buy the official release of the score, as it is missing a lot of tracks and has NONE of Deavid Soul's. I donit know what the CD producer was thinking as the variety of the score is totally lost in this release. Then again, it may have been too expensive to license if absolutely everything were included. For those who don't want the game, what is offered in the album is still worthy of a listen and a reasonable score.