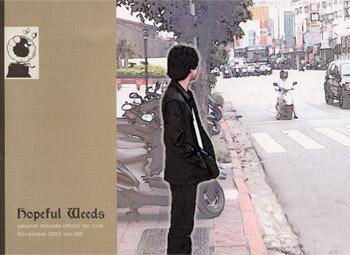 Hopeful Weeds is the name given to Yasunori Mitsuda's fan club. During the time period in which the fan club has been established, Yasunori Mitsuda has put out various volumes of CDs, each containing two tracks, for his fans' listening pleasure. Each of the volumes contains something stylistically different. The third volume is probably the most interesting of the three volumes because it features some arrangements. This volume consists of two tracks as well, "Lost Fragments" and "Guldove Home".

Fans of Mitsuda may recognize these tracks as both being featured in Chrono Cross. These are both acoustic guitar arrangements of the respective Chrono Cross pieces to commemorate the release of a guitar sheet music book for the game.

While not much can be said about the first track, "Lost Fragments," it is still a very nice arrangement. The use of the duet of acoustic guitars adds a nice touch to the piece as well. It possesses all the qualities of the original "Lost Fragments," but with a much sharper texture. Some might also recognize the melody of this track to the opening of "Scars of Time" from the original soundtrack.

The second track, "Guldove Home" is the more interesting of the two. While another guitar duet, it also employs the use of light percussion. This adds for a nice touch of development. As for the last track, the texture of the track is much sharper and the original qualities of the track are retained.

The Hopeful Weeds series is a very nice set of albums that Mitsuda produced for his fans. The third volume is interesting because it features actual game arrangements. It may offer insight into the upcoming Chrono Cross arranged album that should be due out sometime this year. But who knows what that album will feature? While you won't be able to buy this in any stores, if you do manage to track it down, definitely acquire it since the composition and message are totally exclusive here.

All instruments performed by Yasunori Mitsuda.

Album was composed by Ясунори Мицуда and was released on November 2002. Soundtrack consists of 2 tracks tracks with duration over about 10 minutes. Album was released by Procyon Studio.