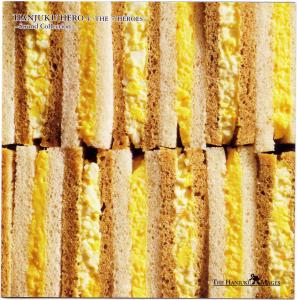 The Hanjuku Hero series has always been known for having light music and musical parodies, but Hanjuku Hero 4 ~The 7 Heroes~ decided to take the silliness one step further. It combines the retro approach of 2003's Hanjuku Hero VS 3D soundtrack with diverse compositions and arrangements in a mixture of styles. While Nobuo Uematsu's compositions remain the focus on the score, he contributed little original material, while guest musicians Kenji Ito, Kenichiro Fukui, Tsuyoshi Sekito, Naoshi Mizuta, Hirosato Noda, Ai Yamashita, and Kenichi Mikoshiba took a larger role. The soundtrack was only available as a bonus with the limited edition version of the game and features two discs of mostly ridiculous music. What did the massive team achieve?

The first and last sections of the soundtrack features 13 themes controversially transferred directly from Nobuo Uematsu's Hanjuku Hero VS 3D soundtrack. Despite its FFVII-related play on words, "Still More Fighting! Hanjuku Hero" is still the same vocal theme as before. It features a very humorous combination of nonsensical lyrics from a expressive male vocalist, carefree shouting from child choir, and some western-influenced instrumentals. The old-school parodies "Peaceful Kingdom" and "Kingdom Conditions Monthly" with their cheerful melodies, lyrical phrasing, and 8-bit synth. Some will find it annoying and those people are exactly the audience that shouldn't be considering the Hanjuku Hero series for their listening pleasure. Uematsu also references his trademark styles with the whimsical and percussive "Wandering in a Different Space", the dramatic orchestral battle theme "Jet Black Hatred", or the sentimental reflective theme "4 Rice Rivers". However, some of the weaker themes from the predecessor are also reprised, such as the literally barking mad "You're Not Wanted Here" or the briskly looping circus music "Barrage Ring Music". Uematsu also contributed one original composition, "Alma's Moon Walking", which moves from a lovely pizzicato strings section into a rasping bagpipe march with Final Fantasy Tactics Advance characteristics.

There are nevertheless original compositions from most of the guest contributors to the soundtrack. Kenji Ito offers the graceful courtroom dance "A Blooming Rose Which Sings" and the light rock battle theme "Changing Heartbreak Into A Blade"; while written in a typical Itonian style, these refined and melodic contributions are of equivalent quality to his Minstrel Song work. Tsuyoshi Sekito also offers two battle themes, "Let's Go! Crimson Jacket" and "Groar! This Hot Desire", in the western spirit of the score. They're both enjoyable with their catchy trumpet melodies and light rock accompaniment, the latter also having tinges of Musashiden influence. Naoshi Mizuta creates an haunting atmosphere in "Hidden Research" with enigmatic tuned percussion ostinati and surprisingly elaborate development. His juxtaposition of distorted bass guitar and cheesy electronic melodies in "Reckless Blood Manipulations" is a little awkward, however. Ai Yamashita diversifies the soundtrack a little further with plodding piano-based "Dreaming of the Lost Kingdom" the Arabian-tinged "Praying for the Prophecy", though her work suffers from Hirosato Noda's low fidelity samples. Hirosato Noda's own compositions are both cheesy light techno themes; "Cyber Sound Orchestra" is surprisingly catchy and colourful overall while "Get the Research Data!" is a potentially sickening parody of 'Popcorn'.

The score often relies on diverse Final Fantasy arrangements for its popularity. Starting with the classics, Sekito's "Castle Pandemonium" is charming and convincing Fistful of Dollars parody while Kenichiro Fukui's "Matoya's Cave" is an elaborate synthesized orchestral variation hindered made less expressive by Noda's implementation. Yamashita's take on "Into the Darkness" emphasises a triple metre and uses some avant-garde features, though is excruciatingly painful in the opening due to its bombastic motifs and implementation. More mature arrangements are Mizuta's slow jazz grooves for "The Crystal Tower" and Ito's minimalist vibraphone-based arrangement of its counterpart "Crystal Cave". The funniest track on the album is Fukui's "We Are The World", a variation on Final Fantasy X's heavy metal theme "Otherworld" that replaces the original vocals with a series of synthesized 'yon' exclamations (Japanese for 'four'). They are hideously manipulated by Mr. Noda so that they become actually out-of-synch with the harmonies some of the time to hilarious (and hopefully intentional) effect. The synthetic vocals are eccentric and endearing, with high-pitched 'yons' being proudly uttered throughout the piece as the instrumentals are left unchanged, while a carefully interspersed low-pitched 'yon' is heard occasionally that outshines the others in terms of loudness, hilarity, and comedic timing.

One of the most questionable features of the soundtrack is its seven brief arrangements of the egg dance, a cute Arabian-inspired theme from the original game. While the styles adopted are diverse, none of the themes are sufficiently long to demonstrate much flair. This is exacerbated by the fact that the intention here was simply to demonstrate an array of styles, not actually do anything worthwhile or interesting with them. Further, the vocal use is variable but often unpleasant due to the inconsistent implementation. While these arrangements would have made good bonus tracks, they're pretty interruptive and annoying when spread across the soundtrack. Rounding off the score are a few more quirky tracks. The most unusual of the so-called original compositions, Kenichi Mikoshiba's "A World Where Elephants Bark" leaves music behind in favour of blending the sounds of a machine gun, an ambulance, glass smashing, and a doomed elephant. Kenichiro Fukui daringly presents famous excerpts from Ludwig van Beethoven's 9th Symphony and 5th Symphony receives treatment in "Gaia Symphonia -Chorus-" with a series of Hanjuku Hero-related lyrics. Continuing with the vocal goodness, the opening track's vocalist returns for "Hanjuku 6 x 9 (=54)," a 12-bar blues show tune that develops really well while featuring a fun instrumental section, backing singers, and egg-related lyrics.

All in all, Hanjuku Hero 4's score is one that shouldn't be taken too seriously. The soundtrack is all about humour and quirk — composers and arrangers doing silly things they wouldn't normal get a chance to do in their more conventional projects. There are plenty of great melodies, novel arrangements, and hilarious tracks to be found with particularly highlights being the contributions from Kenichiro Fukui, Tsuyoshi Sekito, and Kenji Ito. The soundtrack nevertheless has limitations such as the interruptive egg dances, untouched reprises, and often awful synthesizer operation. People shouldn't expect to find any truly impressive material or a cohesive collective soundtrack either. Though it's difficult to purchase, this album is still great for a light-hearted and humorous romp every now and again.

Came with the Limited Edition of the game.