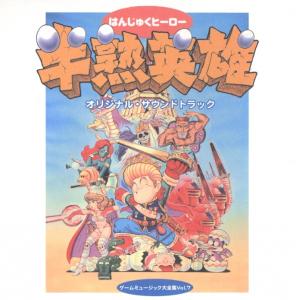 The first track we hear on this album is "Opening," which is both ear piercing and underdeveloped. The melody consists of a falling arpeggio, which is then accelerated in a second section, while the harmony is almost non-existent, comprising of just a single bass beat. It sounds like an inverted version of the Final Fantasy signature track, "Prelude," but far less memorable or endearing. The next track, "Map Theme," is certainly a notch up; however, once again not a lot goes on with the track and, as with many of Uematsu's early themes, he widely uses arpeggios and forgets to develop the melody. Considering the limitations at the time, these aren't bad attempts, but we know that he could do better. The parodic "Battle" theme features a cheesy melody that just rips right through the action. The fast accompaniment adds a sense of urgency to the track, but, apart from this, it has serve no other purpose. This is one of Uematsu's shortest battle themes and not an apt rival to his Final Fantasy ones.

The album contains four tracks prefixed 'Field' which are then suffixed by an appropriate season. The first of these, "Field (Spring)," rivals the likes of Final Fantasy's "Matoya's Cave" melodically, upbeat and memorable with a dainty, albeit cheesy, melody. Unfortunately, it's lumpy and repetitive harmonies mean it doesn't surpass the aforementioned theme, though is pleasant nonetheless. "Field (Summer)" is also a fun track and features more complex harmonies than most themes on the score. Its syncopated rhythms and slick melodies add a light jazz feel that effectively depicts summertime. "Field (Fall)" is also great, employing use of a proud melody and some dramatic chord progressions in conjunction a light old-school sound; it's almost like a parody of his own overworld themes. Finally, there's "Field (Winter)," which simultaneously conveys a certain iciness and Christmas spirit with its gentle but sharp melody. Indeed, the field themes are all very well done, despite their utter melodic reliance, and among the biggest highlights of the score.

This album has, as any Hanjuku Hero soundtrack should have, many egg-related tracks. "Egg Dance" is the most obvious of these and has been arranged countless times on the Hanjuku Hero 4 -The 7 Heroes- ~Sound Collection~. It's simple, brief, and oriental-influenced, akin to Chrono Trigger's "Burn Bobonga". There are also three "Egg Monster" themes, among the most amusing themes on the soundtrack, though annoying en masse. "Egg Monster (Weak)" offers some descending glissandi to create a slight ominous feel in conjunction with its fragmented and joyful exterior, "Egg Monster (Medium)" hybrideses elements of the battle theme with egg yolk, while "Egg Monster (Strong)" is probably the best of the three, having similar qualities to Final Fantasy V's "Battle With Gilgamesh" in places. Moving on, "First Moon Event" is probably the disc's most successful track, offering a dreamy and adventurous feeling with its idiosyncratic melodies. Strangely, this track is surrounded by filler tracks, and each of them are under seven seconds long.

The album finishes with two ending themes and an anomaly. "Ending" begins with a snare drum that offers a steady pace for a triumphant melody to project against. It features a memorable secondary section filled with broken chords in which, despite the sound quality, the melody really gets through well. While it's the stereotypical one-dimensional ending theme in many ways, given the comical nature of Hanjuku Hero, that's more than appropriate. "Congratulations" is the next track on the list, though is brutally cut short after 20 seconds. The final track on the album doesn't exactly redeem the loss by providing a grand finale. The soundtrack closes with "Game Over," a rendition of Chopin's Funeral March. It's kept in its traditional minor form at first, but then, all of a sudden, comes to life. It's a fun and effective parody, but unfortunately fatally misplaced.

The Hanjuku Hero Original Soundtrack may feature just 16 minutes of low-quality synth music, but that doesn't mean it isn't a worthwhile purchase. It provides a good overview of Nobuo Uematsu's works for his trademark non-FF series, Hanjuku Hero, and really shines with the "Field" tracks and "First Moon Event". Though the music is entirely melody led and not on par with that featured in All Sounds of Final Fantasy I & II, this doesn't matter too much, as it was wholly appropriate for the ridiculous game it accompanied. The ultimate question about whether to purchase it from VGM World should be based on the worth of the Hanjuku Hero VS 3D Original Soundtrack, the PlayStation 2 soundtrack this is packaged with. I've reviewed it here, so seriously consider it.

All tracks composed by Nobuo Uematsu
except 19, originally composed by Fryderyk Franciszek Chopin.

Only available together with the Hanjuku Hero VS 3D Original Soundtrack (SSCX-10095~6)
Album was composed by Fryderyk Franciszek Chopin / Нобуо Уэмацу and was released on June 25, 2003. Soundtrack consists of 19 tracks tracks with duration over about 20 minutes. Album was released by DigiCube.