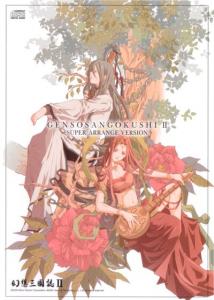 The Genso Sangokushi II Super Arrange Version was another promotional album released with the game. Featuring arrangements by Yukihiro Jindo, Kohei Wada, and Ayako Shibazaki, it's a slightly meatier arrange album than the first one, but how's the quality?

Similar to the first arranged album, this arranged album also opens and closes with vocal themes. The first, arranged by Kohei Wada, is entitled "Wo shi ai shen" and is a nice J-pop style theme with some rock influences. It's worlds above either of the vocal themes on the first arrange album. It's quite catchy and boasts a great melody. There are some strange sections where the reintroduction of the guitar riffs sounds a bit off and awkward, but for the most part, it's a solid entry. The other vocal theme, "Ainokaze," is arranged and performed by Ayako Shibazaki. This one is a much calmer theme. While the focus is on an acoustic approach in the beginning, with acoustic guitar and piano driving the melody over top an ethereal backing, the short instrumental bridges help bring in a bit of Celtic and Middle Eastern flair. It's a peaceful theme, but I much prefer the energetic "Wo shi ai shen". There are also instrumental versions of both of these, for those karaoke enthusiasts out there.

Unfortunately, while most of the arrangements are at least accessible and grandiose, a lot of them seem rather average. Most of the themes on this arranged album are orchestral in nature. While themes like "Continental Highway" manages to infuse some Asian influences throughout the piece, most of the orchestral themes, such as "The Blue Sky is Already Dead" and "Pain from the Separation of Loved Ones" manage to stick to a rather lackluster sound and start to sound a bit on the generic side. Even themes like "Tasogare no kishi," which is essentially an ethereal choral driven arrangement don't manage to leave their mark on me.

The last two themes on the album, "Millennial Bonds" and "Memories Are Beyond the Eternity," manage to spark my interesting. "Millennial Bonds" is another Asian influenced arrangement that focuses on creating a beautiful atmosphere through the use of traditional Chinese instruments. It's a very soothing piece, and although I think the drum pad introduced in the latter portion of the theme is entirely unnecessary and kills the atmosphere, it manages to be a strong theme overall. Lastly, "Memories Are Beyond the Eternity" is a very nice strings and piano arrangement done in a semi-classical sense. It's a melancholy, yet poignant, theme that manages to be one of the highlights, even if it doesn't manage to incorporate any sort of complexity.

In the end, this arranged album is a bit weaker than its predecessor. While this album offers more arrangements, most of the arrangements tend to be rather mediocre in terms of gauging any reaction from me. There were a few highlights and the production quality is pretty high overall, but I miss some of the more creative arrangements from the first album. Fans of orchestral music might find this interesting, but again, it'd be hard for me to justify getting in via auctions at what is probably going to fairly expensive.