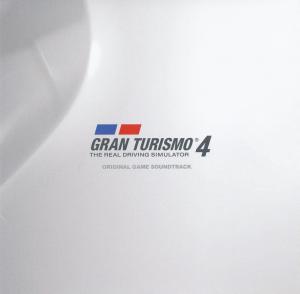 The Gran Turismo 4 Original Game Soundtrack sees new contributions from each of the series three main series composers — Masahiro Andoh, Isamu Ohira, and Daiki Kasho — for the first time on the same album. With Masahiro Andoh being part of Los Angeles rock band "The Bad" and Daiki Kasho providing the music for music group Dakota Star, it's refreshing to hear each of the composer's styles represented on the same album. In regard to the other music which you may have heard in game, Gran Turismo 4 has received three other album releases too, with tracks from popular music artists, trance/electro bands, and classical music arrangements each published on separate albums. Mostly though, in regards to their history in Gran Turismo games, this album features a great number of familiar themes from earlier additions to the series.

The Bad offer two new tracks for this album in the form of "Drive You Crazy" and "Vette Lug," two fairly strong themes with obvious influences from Masahiro Andoh's rock style. The rest of The Bad's contributions are rearrangements of tracks from the Gran Turismo Original Game Soundtrack, but it is interesting to see how these themes have evolved with the series. While the game has made advancements in its graphics potential over the course of ten years, Andoh's themes have also seem some welcome changes to match the evolution of the game. What other example could I use other than the album's arrangement of "Moon Over the Castle," Andoh's signature theme for the series. "Moon Over The Castle ~Orchestral Version~" is the most impressive and captivating arrangement of the theme to date, with a stunning soprano vocal and orchestral performance from The Skywalker Symphony Orchestra (who you may know from Gears of War 2 or Command & Conquer: Red Alert 3). Though the theme goes back into its original rock track form, the way it is announced in operatic form is magical and inspiring — almost to highlight the accomplishment and classic which is Gran Turismo 4.

Other arrangements which feature on the album have also come a long way. "Kiss You Good-Bye," a good example, features an amazing new development around the 2:00 with great guitar work from Andoh and Doug Bossi and keyboard interjections from Vince Di Cola. The keyboardist actually serves as the main difference between this track and its original, with his new jazzier take of the background piano chords, and clever hidden integration of the main motif in his note selection. The same goes for "Freedom to Win" which now has a much more gentle and well-received intertwining piano line. It isn't just his contributions which make The Bad's arrangements successful though, but more the sense of the band's unity, direction, and passion for the themes which is explored through every guitar riff, drum line, and indulgent keyboard melody.

"Nobody" is one of these themes were the band works together particularly to create a lustful soundscape. The track deters from the original with blissful, easy-going sections which are integrated within its otherwise full-frontal rock style. The first instance of this comes at around 0:30, with a relaxed acoustic guitar taking the lead alongside a gentle bass accompaniment, during which also comes the introduction of a slow-paced drum beat and airy sound effects. In all, the arrangements of Andoh's original pieces on this album are highly successful, without exception — far too often do we see weak arrangements amongst great ones in game music.

Also on the soundtrack, we hear Daiki Kasho contribute though Dakota Star, who have a selection of four vocal themes on the album. Vocal themes in the Gran Turismo series from the series' Japanese composers have been typically weak in the past, so you may be surprised to hear that Dakota Star's additions to the albums are good listens. "It's All About You" and "Soul Surfer" are two poppy tracks with lively accompaniment and nice vocals: musically the tracks are gripping, especially in terms of development, whereby Kasho keeps us holding on for the theme to unfold. The other two tracks from Dakota Star, "What to Believe" and "Break Down" are written in a different style to the previous two tracks. "What to Believe" is much more of an alternative rock track with nice vocals from Alan Brey - furthermore, it also builds upon the delicious walking bass motif from Kasho's "Obscure" from the Gran Turismo 3: A-Spec Original Game Soundtrack, highlighting continuity in the series. "Break Down" seems to be a mix in style between Avril Lavigne and Taylor Swift (which is certainly an interesting concoction) that somehow manages to be a nice listen with some not-so-harsh vocals.

So, what of Isamu Ohira on this soundtrack? Well, the resident composer offers ten themes on this album, two of which — "Endless Journey Ver. 2" and "Light Velocity Ver. 2" — are arrangements from the Gran Turismo 3 A-spec Original Game Soundtrack. In regard to the arrangements, they have both received rather relaxing remixes with flutes, airy synth and chirpy drums taking control. Much like the rest of his contributions on the album, these two arrangements adopt an easy-listening style, but don't stray too far away from their original jazz versions. A fair few tracks take upon a similar feel;. "Horizon," "From the East to the West," and "Be at Home" are all very calm tracks which show a different side of Ohira to perhaps what we're used to; Prolonged notes, creative synth, ambience and reverberation make these themes especially relaxing. You'll be pleased to hear though that a fair few of the new compositions on the album do undertake Ohira's signature jazzy manner though, with "Don't Kick Yourself" and "Hypnosis" being his better tracks. Overall though, in regard to how his themes compare to Kasho's and The Bad, Ohira does seem to be a bit of an underdog once more, with very few of the tracks managing to stand out as classics.

All things considered, the Gran Turismo 4 Original Game Soundtrack is another fine accomplishment in the series, but I can't help but feel that Ohira has once more disappointed with a selection of weaker themes, despite the promise he showed in Gran Turismo 2 and Gran Turismo 3. The album is very much carried by The Bad and Dakota Star who provide us with consistently strong themes. Though Ohira's tracks provide an organic and relaxing backdrop, many fans from earlier albums would have been expecting his jazzier self to come out and finally contest Andoh's themes, and come out on top at last. The soundtrack has a good variety of musical styles, and in that sense is a success, but it's still barely the strongest in the series.


Album was composed by Alan Brey / Дайки Касё / Isamu Ohira / Масахиро Андо and was released on December 22, 2004. Soundtrack consists of 22 tracks tracks with duration over more than hour. Album was released by Village Records.