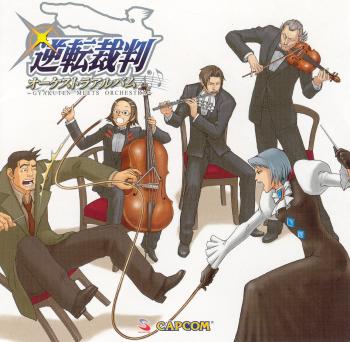 Gyakuten Saiban is a text adventure series from Japan. A text adventure, not in the classic old PC adventures where you had no visuals at all, but a series of still frames mixed with a lot of reading and choices to make. This album in particular is a series of orchestral arrangements that sprung out of the blue back in 2006. While the orchestra itself is sparser than you might expect, the intimate feel tends to work in its favor. If you, the reader, grabs anything from this review it should be this: This album is a rare treasure with a great mixture of light hearted sound to more dramatic tones. It's well worth placing in your collection if you can manage to track it down.

The first track, "Ryuichi Naruhodo ~ Objection!", gets the album off to a good start. Suitably tense and dramatic, it also coveys a light on its feet feeling as well. This goes along with the game itself as since this is a courtroom drama, the objection is your primary weapon to rebut against a courtroom that is stacked against you. These moments are tense, since they mean that you succeed and your client could be one step closer to freedom or you fail and you end up losing the case. The music is simple, but effective, with the strings doing most of the heavy lifting.

"Mayoi Ayasato ~ Gyakuten Sisters' Theme" is an interesting mixture of harpsichord with strings. It's a throwback to a different style of composition, and an interesting choice of orchestration by Noriyuki Iwadare, but it works well. I especially adore the section that starts about a minute and a half in where the harpsichord takes over the material.

"Reiji Mitsurugi ~ Great Revival" returns to the more dramatic overtones set during "Objection!". It's brassy and bold and grabs you from the get go. This feel is carried over into the next piece as well with the same brass led power. On the other hand, "Investigation ~ Mystery Suite" seems more artificial than the previous pieces and makes me wonder why electronic samples were added instead of the full orchestra throughout. It's still excellent material, but is a strange choice of direction. Perhaps arranged Naoto Tanaka didn't have the same resources available to him as Noriyuki Iwadare did.

"Gyakuten Saiban ~ Courtroom Suite," though, is exceptionally well arranged fully using the instrumentation in an effective manner. The suite itself is well constructed starting with some suspense build up and carrying the tension right through til the big finale at the three and a half minute mark. The structure is also similarly executed within the second Courtroom Suite which comes in a later track. Both tracks bring the right amount of energy and a great ensemble feel. Sadly that artificial sound creeps back into the third Courtroom suite by Kaori Komuro and somehow, when put side by side with the rest of the material, it doesn't really stack up well.

For another change of pace from the usual courtroom drama there's the track "Godot ~ The Fragrance of Dark Coffee", with a mixture of strings and saxophone at the beginning. While the instrumentation pattern is the same as "Gyakuten Sisters' Theme", the style is worlds apart. I especially like the inclusion of the piano which comes in at the three minute mark. The blues / jazz style is a wonderful addition to the collection.

"Kurain's Geneology", which follows is a strange piece. Right from the beginning, this character theme medley feels like it's building towards something, and it is. Eventually the "Gyakuten Sisters' Theme" comes back into play, but this final build up seems to take so long to appear that I almost lose interest in the piece. Of all the themes here, the second to last track "Gyakuten Saiban 3 - End" is closest to Noriyuki Iwadare's composition and arrangement style. The trite melody and the orchestration all gives off a very Iwadare vibe. Not that this is a bad thing, but aspects of it seem lifted from his earlier works, especially Grandia.

In conclusion, this album is an interesting mixture of tracks. Would I recomend this album to someone who has never heard or played the Phoenix Wright series? Yes, as I've never played the series, but I still appreciate the simple, yet pleasing to the ear, pieces of music which adorn this album. The album is a rare treasure with only a few minor missteps and worthy of any collection.