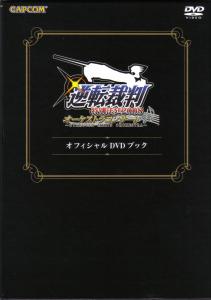 On April 20, 2008, Capcom organised the ultimate live event for fans of the Phoenix Wright series, Gyakuten Saiban Orchestra Concert ~Gyakuten Meets Orchestra~. It featured the Tokyo Philharmonic Orchestra performing a selection of suites from cross the series, specially orchestrated by Noriyuki Iwadare. While many of the items were taken from the Gyakuten Saiban Orchestra Album ~Gyakuten Meets Orchestra~, most arrangements were adapted for live performance and there were some fantastic exclusives. Following the success of the concert, Capcom commissioned two additional concerts, an album release, and a DVD recording. The DVD recording was briefly commercially available and recaptures much of the experiences at the live event with its mixture of orchestra recordings, courtroom animations, and special guest interviews. Let's take a closer look...

Before each item of the concert, there are original courtroom animations featuring portrayals of the characters from the series by their original Japanese voice actors. The opening features the Judge, Phoenix Wright (aka Ryuichi Naruhodo), and Miles Edgeworth (aka Reiji Mitsurugi) building up expectation for the first performance, "A New Trial is in Session" from then-newest instalment Apollo Justice: Ace Attorney. The Tokyo Philharmonic offer a richer performance than the chamber orchestra from the original Gyakuten Saiban Orchestra Album. In particular, the string and brass performers capture the atmosphere of the courtroom both with their commanding melodies and their stern postures on the video. Furthermore, Noriyuki Iwadare made a strong arrangement choice to replace the piano backing of the original with a rhythmically driving string basso ostinato. This change was necessary since the stage could not fit a piano, but actually worked to the concert's advantage. The only slightly detrimental feature is the tuned percussion, which sounds a little out of place for such a mature composition. It's a promising start regardless and enjoyable from both an aural and visual perspective.

After the conductor bows, the Judge, Miles, and Phoenix reflect on the sumptuous performance. They discuss the history of the series, noting that few would have anticipated an orchestal version of the concert back at the series' debut in 2001. Afterwards, the audience expresses their surprise as they are presented with an illuminated pipe organ performing an extended passage from Bach's "Toccata and Fugue in D Minor". The organist brings a lot of atmosphere to the hall with her virtuosic performance. However, the item does feel out of place, despite the Justice for All tie-in, and it's a pity an original organ arrangement wasn't possible like it was in the Monster Hunter Orchestra Concert. Listeners are subsequently presented with an extended suite based on the courtroom themes from the first three games in the series. Noriyuki Iwadare decided to condense the contents of three suites into one for the understandable purpose of concert progression. Fortunately, the decision paid off since the new arrangement features expert transitions, plenty of dynamism, and a great dramatic arch. Despite packing ten pieces into one suite, it comes together as a fine whole and is especially exciting at the organ-supported interlude and the dramatic finale based on Trial and Tribulation's "Investigation" theme. It's also enjoyable to watch the orchestra interpret the theme in the video recording.

Before the intermission, there are a series of charismatic performances of the series' character themes. First up, Trial and Tribulations' Zenitora is given an especially catchy interpretation featuring swinging brass, samba percussion, and even a whistle solo. This item is actually adapted from the Gyakuten Meets Jazz Soul album, but doesn't feel at all out of place. After more courtroom drama and tomfoolery, the jazz focus continues with an altogether more contemplative intepretation of Godot's theme. The succession of tenor saxophone solos sometimes create the feeling of smooth jazz, but the improvisation is sufficient complex and the performance suitably deep to ensure the arrangement is far from supeficial. There are also more subdued flute and viola solos to enhance the timbal and emotional range of the item. As with preceding items, there are projected video screens in the hall, but the focus is suitably placed on the soloists amidst the orchestra. Between them, they certainly capture that distinctive fragrance of dark coffee. As a final item before the session takes a break, there is a short interpretation of Miles Edgeworth's theme "Great Revival" from Justice for All. This regal march is a little too stiff for my tastes, but it gradually picks up with the introspective interludes and the foreboding build-up prior to the recapitulation. As the orchestra departs the stage and the hall dims, there is a charming and nostalgic discussion with Miles featuring his theme's original background music.

As the court resumes session, the video screen portrays a discussion between the Judge, new protagonist Apollo Justice (aka Hosuke Odoroki), and the rocking Klavier Gavin (aka Kyoya Garyu). The concert subsequently recounts the courtroom themes from Apollo Justice: Ace Attorney in an exclusive arrangement for the concert. The compositions and orchestrations largely stay true to the format of earlier courtroom themes in the series. However, drama is developed in a much more subtle way between the themes, so that the transitions in intensity are continuous like a real courtroom session, rather than discreet like the soundtrack release. There is an evolution from the warm yet suspenseful string opening based on the trial theme towards the much more tense and suspenseful adagio and allegro variations of the questioning theme. The visuals only emphasises the increasing tension, both with respect to the increasingly agitated orchestra and the effective overhead videography. The suite culminates in in the emegence of the 'Pressing Pursuit' theme complete with powerful brassy melodies and bombastic percussive backing. Fans subsequently receive another exclusive suite dedicated to the series' villain's themes. While Damon Gant's theme "Does Everyone Want to Swim?" is surprisingly serene, "The Murderous Gentleman's Pleasure" is quite sinister with the foreboding finger snapping and sleazy jazz influences. Following an abrupt transition, "Listen, Please!" provides something unique to the concert once more with its Romani-influenced fiddle work and intricate woodwind decoration.

Following another courtroom argument between the Judge, Apollo, and Klavier, the DVD recording shows series' arranger Noriyuki Iwadare and vocalist Haruka Shimotsuki come to the stage. Shimotsuki subsequently performs Apollo Justice: Ace Attorney's "Loving Guitar's Serenade" in her characteristically youthful yet heartfelt style. While the English pronunciation is sometimes awkward, she generally proves a good choice of vocalist for the series. She is fluidly supported by some soft yet emotional orchestration. In addition, Iwadare himself proudly accompanies on the Kanadeon — a unique music box prototype that uses MIDI input. The effect is even more special in conjunction with the visuals on the DVD recording. Following the performance, an announcer comes to the stage and interviews Iwadare, Shimotsuki, and series' director Shu Takumi in Japanese. After this break from the music, Iwadare takes centre stage once more as guest conductor for the famous "Gyakuten Sisters' Theme". It's clear from the video he has considerable command over the orchestra. The resultant item features a subdued and formal tone appropriate for the courtroom setting. However, it is coloured by more gushing, light-hearted, and nostalgic moments that will particularly appeal to the large female audience. To finish, Hirofumi Kurita returns to the stage to perform Trials and Tribulations' ending theme. It's another subtle and modest orchestration, but nevertheless captures the lyricism of the original piece, features some standout performances by the concertmaster, and offers several momentous passages towards the climax.

In game concert tradition, the performance doesn't end there. After a warm applause for the orchestra, the recording returns to the judge in preparation for his verdict. After he falls asleep mid-speech, the video calls upon the audience to clap in order to wake him up. Eventually the applause suffices and listeners were greeted with two encores for their efforts. For the first, Shu Takumi surprisingly returns to the stage to conduct a rendition of "Oo-edo Soldier Tonosaman", much to the disattention of the orchestra. Regretfully, the performance omitted the traditional Japanese instruments of the album orchestration. However, the booming percussion, confident trumpets, and passionate violins still recapture the appropriate flavour. Though lacking individuality, the result is a polished and enticing performance. In the last animation of the recording, viewers are presented with a debate between all five characters featured elsewhere in the concert — the Judge, Phoenix, Miles, Apollo, and Klavier. It leads into a rendition of the theme everyone has been expecting from the evening — Phoenix Wright's own character theme "Objection!". While this item served as a conservative opener for the studio orchestra album, the Tokyo Philharmonic Orchestra ensure they present it as an emotional finale for this live recording. They really bring out the energy and emotion behind the piece and all sections of the orchestra receive their chance to shine. The DVD ends with a softly accompanied credits roll.

This DVD recording is definitely one for the fans. For fans of the games, it features exclusive animations, interesting references, and insight from the director. For fans of the music, the concert offers a good range of material from the series enhanced with emotional orchestrations and solid performances. Occasionally the approach is too conservative or, conversely, sentimental, yet there are enough exceptions to ensure an entertaining listen. However, some will prefer to stick to the album recording instead of the DVD recording, especially those without a great interest in the games themselves or those who cannot understand the Japanese dialogue. Either way, this is a very impressive concert production that is well-commemorated in this DVD recording.

Multiple Viewing Angles for each song, Angle 1 shows the performers while Angle 2 shows a direct feed of the video clips which were projected onto the hanging screen.

Hardcover Book Outercase, with 12 Page Booklet and DVD inside.

Includes the character's special Animated Sequences which were shown between the song performances.