The Best of Tales 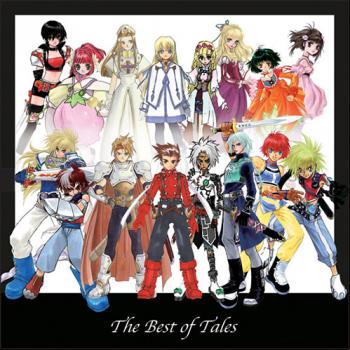 Best of Tales, The
Front

Ever since the debut of the series of Tales of Phantasia in 1995, there has been an animated introduction together with its theme song. The Best of Tales is a collection of the series' theme songs created from 1995 until 2007 in their extended versions. This collection contains nearly every theme with the exception of Tales of the Abyss' "Karma". They are all written by Japanese pop and rock producers and bands. A range of high-profile vocalists feature, including those of Day After Tomorrow, DEEN, and Do As Infinity. Let's take a closer look...

Misono starts with "VS", the theme for the then-new DS installment Tales of the Tempest. As she is the former lead singer of the band Day After Tomorrow, which contributed two themes for the series earlier, listeners will recognise her voice immediately. The style is straightforward with fast electronic beats and use of synths and electric guitars, reminding me a bit of Avril Lavigne. It may be not one of my favorite tracks, but it's enjoyable on its own if you don't listen to it that often. The next track is Tales of Legendia's "TAO" performed by the Japanese trio Do As Infinity. It's a typical J-rock piece with use of piano and synth effects. The vocals of Tomiko Van are good and emotional, even if she doesn't have a powerful voice which is needed in such an energetic track.

Continuing, "Good Night" is the duo Every Little Thing's contribution to Tales of Rebirth. It's in a style somewhat similar to the previous track, only a bit softer and more melancholy. The theme manages to build up the right atmosphere, even if it's a bit too slow for an opening theme in my opinion. It's nevertheless enjoyable, especially in its full length version here. The next two tracks come from the former band Day After Tomorrow with singer Misono at the front. Both are used for Tales of Symphonia, though one for the original GameCube release, one for the Japan-only PlayStation 2 re-release. Similarly styled, both tracks feature an upbeat and bright atmosphere with heavy use of synth and electric guitars. The melodies are excellent and true earwigs. In addition, Misono's voice fits here extremely well and the songs are well balanced with the remaining soundtrack.

Mai Kuraki's theme for Tales of Destiny 2 "Key to My Heart" is an interesting mix of English and Japanese vocals together with pop and jazz instrumentation. It's one of the lesser known tracks, which is quite a shame because I really like it; the song might sound sometimes a bit cheesy, but it's alright. The voice is haunting and fits very well within the music. Another one of the less popular tracks is "Flying", Tales of Eternia's opening theme, performed by the Japanese four-member band Garnet Crow. The rock sound is refreshing, especially with the use of percussion, guitars, and the deep vocals of Yuri Nakamura, who shines especially in the catchy chorus of the song. Strangely one of my least favorite Tales soundtracks and games has one of my favorite theme songs.

"Like a Dream" for Tales of Destiny was the first male opening theme of the series. The Japanese band DEEN does an excellent job by painting the introduction with this beautiful song. While the music is well arranged and performed with catchy synth and rock elements, Shuichi Ikemori's voice is warm, emotional, and fits the overall atmosphere quite well. Some people might find this style a bit too cheesy, but I like it; it's pleasant, enjoyable, and builds up the full glory with the extended version here. The success of a male vocalist here inspired the use of Bump of Chicken on Tales of the Abyss and the return of DEEN on Tales of Hearts. However, you'll have to check out their singles to hear these theme songs and numerous other recent ones.

The eighth track is a version of Tales of Phantasia's "The Dream Will Not Die ~ The Spilling Drops of Time". Like Tales of Symphonia, the game was also released on different systems, but received the same song each time only with different arrangements and vocals. The PlayStation version's opening theme features a rock arrangement and vocals by YO-MI. I especially like use the jazz integrations such as piano and sax here. She's not one of my favorite vocalists, but her voice is quite enjoyable. The CD closes with the original version of "The Dream Will Not Die" with vocals by Yoshida Yukari, who also performed the original Super Nintendo version. This track features the original pop style of the song heard inside the game, only arranged in better sound quality. While it's definitely a matter of taste, I prefer this version more than the PlayStation version, because it sounds more lively and peppy with better vocals and chorus. But as I said, it's a matter of taste.

Well, what can I say more? With this CD, every Tales fan can have their personal collection of theme songs and can enjoy them all without changing the discs of the different soundtracks and singles. With a mixture of rock and pop ballads, most will get what they desire. Some may find it worthwhile tracking down a second-hand copy of the limited edition version as well, which features game opening movies, an elaborate booklet, and character cards. Although I find the absence of Tales of the Abyss a bit sad, this CD is a must have for series' fans and very enjoyable.

note: I simply took the information already here on VGMdb (well, and credit break-downs from joshin), but I don't think they should be any different.

(Can someone double check tracks 4, 6 and 7 info when they see this; mostly the non-performer credits)