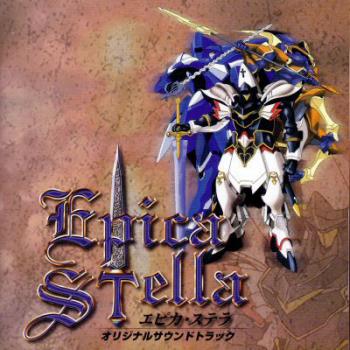 Vanguard Bandits, released in Japan as Epica Stella, was a moderately popular strategy RPG made by Human Entertainment shortly before its death. Crafted by Koji Nikura, Chiyomaru Shikura, and Masafumi Takada, the game's score was far less serious than most strategy RPGs. Instead of reflecting the danger of combat, it tried to endear to listeners with its motivating vocal tracks and light-hearted instrumental tracks. Did it succeed?

The start of the score is dominated by the vocal tracks. Present in two variations, Koji Nikura's "Believe My Heart" is a generic anime-style opening theme featuring high-pitched female vocals and punchy piano-centred instrumentals. It's still potentially enjoyable with its catchy melody and colourful development for those who like that sort of thing. Chiyomaru Shikura's "Together" is another uplifting gem. It has a harder edge than "Believe My Heart" with its slightly more mature vocalist and rock instrumentals, but is still very feathery overall. Masafumi Takada attempts something a little more deep for the ending theme in "Tomorrow to Start", but doesn't quite succeed. The blend of female vocals and electric piano sounds too aseptic to be expressive while the violin dabs sound totally out of place.

The instrumental tracks are mostly very light-hearted too. "Future" brings a synth orchestra to the forefront, but uses it in a very poppy way to create one of the defining anthems in the soundtrack. A lot of the tracks are even more superficial than this, such as "Crossing the Hill", "Pipipin", and "Cheerful Mood", and would sounds extraordinarily cheery even on a dating simulation. A small stock of such light-hearted themes certainly makes an RPG more attractive, but the whole experience becomes one-dimensional when the score ends up being littered with them.

Although a light-hearted soundtrack overall, there are a few tracks that reflect the intensity of the storyline. "At the End of the Battle" certainly commands listeners with its brisk marching rhythms and sorrowful wind leads. "An Icy Glance" and "Anxiety" meanwhile are slow-building tension theme that makes an impact in whatever scene it is used in. "Liveliness" and "A Hole" get gamers into a battling spirit with their epic organ progressions and resolute rhythms. They recount yet more clichés from classic RPGs, but at least they're well done.

Other action themes like "Enthusiasm" and "Time For the Battle" sound like they belong on a Super Nintendo RPG with their light rock vibe and dated synth. This will be a good thing for a lot of old-school fans out there and their melodies are sufficiently decent to carry them. However, they are so formulaic deep down and lack the personality of true classics. They could almost be created with automatic composition software given how strongly they adhere to timeworn conventions. A possible exception is the final battle theme "Ruin". In this one, the keyboard melodies really glide and the punchy syncopated accompaniment does its job well too. The organ influence is also welcome and helps to tie the score together.

Overall, the Vanguard Bandits soundtrack sounds more like it belongs to a light-hearted Super Nintendo RPG than a serious PlayStation strategy game. This isn't necessarily a bad thing for game music fans out there, but it does result in some very generic and dated tracks. That said, there are probably enough strong melodies and highlight themes for the soundtrack to be worth it for those who prefer the light rock and pop soundtracks of old. It is far from the best of its type, but should suffice for those looking for something familiar.