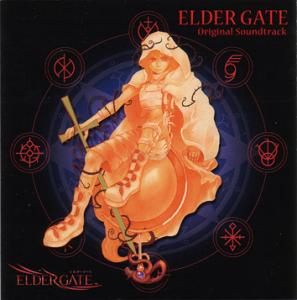 Elder Gate was a fantasy RPG by Konami released exclusively in Japan in 2000. Its score marked Michiru Yamane's first project in the RPG genre following her extensive work on action games like Castlevania. She was assisted by her former Gungage collaborator Sota Fujimori and Hidenori Onishi is also featured in the score with a single sound effects piece. The music was harshly criticised for being derivative by some reviewers. I'll explain in my review if you should give this score a chance or simply avoid it.

Michiru Yamane opens the soundtrack by introducing the main theme in "Elder Gate Overture - Opening". It offers a light and jolly march obviously inspired by the Suikoden series. While it's enjoyable and catchy, it's a too mundane and clicéd like almost all tracks from this score sadly. One of the better tracks, "Name Entry" is a low-key but rather harmonious and serene piece. However, the overworld theme "Holy Fields" is a true nightmare of RPG gamers. The motif is very simple and the overall development just isn't good enough, it's more like an lullaby than an adventurous theme and this isn't appropriate for a world map. It isn't that bad on a stand-alone basis, but it's also not at all fitting. "The Town" sounds like something from the Lunar series with its light percussion and woodwind melodies, though the second part gets surprisingly more serious and includes some bird tweeting. "The Village" sounds similar, only more low-key and boring. With "The Snow Town", Yamane delivers her typical repertoire of bell, piano, and string motifs we expect from her while "The Snow Village" provides one of the most hackneyed and repetitive additions to the score. "The Old Castle" creates a light atmosphere with harpsichord and woodwinds, but again is absolutely boring and too derivative.

Michiru Yamane's battle theme "Holy Tactics" is just as simple and typical as the name sounds. It's just a steady beat with some dramatic and heroic elements. She tries to make an effective battle theme, but fails sadly. She offers better material than this even in her OZ soundtrack. If one piece shows that she's untalented in the RPG genre, then it's this one. The subsequent victory theme is another typical Suikoden-inspired theme with the main motif increased. Things look a little better with the boss battle theme "Portrait of the Victory" where she uses some of her typical rock elements. It's not excellent, but I like the "Holy Fields" motif here in the second half, even if it could have been integrated in a more heroic way. The strength of her contributions are the more soft and melancholy themes, like "The Sadness Serenade", "Wave of Aquamarine" or "Gate of Atmosphere", which sound ok after several listenings and the developement is just fine. "Minstrels in the Pub" is a little catchy and fun gem with some jazz motifs, but it gets repetitive quickly and the ending theme "Screen Credit", while having an lame title, has a kind of medieval feeling within, but it sadly doesn't get nowhere. It's a shame, becaues the track would be better in a more developed format.

Sota Fujimori is something of a saviour for the score. Although I don't like his electronica work from previous Castlevania scores, he did a good job with his contributions here. "The Light of Hope" and "A Peaceful View" are two excellent atmospheric pieces with acoustic palettes. The latter is especially great and reminds me a bit of Yasunori Mitsuda. "Cheerful Desert" is another extraordinary composition that offers a catchy Arabian atmosphere à la Yoko Shimomura's "A Day in Agrabah" from Kingdom Hearts. The dungeon theme "End of the World", mid boss theme "The Climax Prelude", and final battle theme "The Last Enemy" feature his usual electronic style combined with orchestral sounds. The last battle theme is marvellous and adrenaline pumping with its driving techno beat and frenzied melodies. Well worth listening to. Hidenori Onishi's single contribution is a riddle to me. It's just an thirty second SFX track title "Return to the Gate Hole". Why they included it on the soundtrack is a mystery...

I can understand why a lot people think that this soundtrack is bad. Michiru Yamane's first attempt to compose a RPG soundtrack is a bit misleading and not too effective. She uses styles and instrumentations for sceneries which are just too predictable and simplistic. The melodies in some tracks are good, but the arrangements are lacking in most themes. There are nevertheless some memorable tracks, but most of them come from Fujimori, who helps in this soundtrack a lot with his eight compositions and ensures it's fairly listenable. The sound quality isn't the best for its time either and this is especially evident from Yamane's contributions, which don't make full of the PlayStation's capacity. Overall, the Elder Gate Original Soundtrack is a tolerable effort, but fans of traditional RPGs score may be disappointed with its mixed quality and lack of creativity.