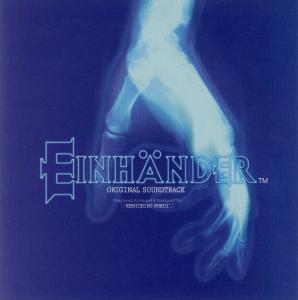 Kenichiro Fukui broke new ground all the way back in 1997 by creating the score for Einhänder, the first techno score to be released for a Square game. Square was mostly known for releasing very traditional scores such as Final Fantasy VII and Chrono Trigger at the time, and it was Einhänder that provided a background for the development of Super Sweep's Square scores and even the techno-orchestral score for Drag-on Dragoon. In the wider VGM field, this may seem less significant, since techno scores being featured in shooters has almost become a cliché; however, Fukui ensures his score isn't especially generic and integrates many original features, such as using a variety of techno subgenres, integrating a lot of voice and vocal use, and giving nearly all his themes unique melodic and rhythmical qualities. As well as being unique, Einhänder's other strengths are numerous. It is representative, as each piece of music complements every situation and environment it was used in the game and the score's fast-paced and energetic nature suited for a shooter. Perhaps more importantly, however, it also works wonderfully on a stand-alone basis, ensuring the Original Soundtrack provides great entertainment for anybody who is willing to give techno music a try.

To give a taste of the soundtrack's styles, diversity, and minor failings, discussing the introduction tracks in a fair level of detail seems useful, though take note that the rest of the review will mostly concentrate on general features rather than specific sections of the soundtrack. Collectively, the introduction to the soundtrack is excellent, though each theme is individually a little underwhelming, as they are all short. "Assault," for example, opens with some suspended notes that create an adrenaline-pumping effect before the theme blooms as it moves into a fast-paced and bass-heavy passage. Ending rather abruptly at 1:04, however, it doesn't get the chance to shine as a stand-alone track, though it works marvelously in conjunction with "Take Off," a short but sweet progressive house piece. It is really with "Capital" that the soundtrack begins to establish some original character, however; though brief, it sounds awe-inspiring thanks to the operatic synth vocals. "Street," the first truly remarkable theme on the soundtrack on an individual level, provides a profound contrast to its predecessor. It's true techno music, with emphatic drum beats, a fast-paced 4/4 metre, and a 'pump it up' bass line. Still, it is made to sound extremely atmospheric thanks to the way a variety of sampled vocals are prominently used and suspended notes are pitch-bent. This makes the track sound somewhat surreal and is great for creating a euphoric effect.

The most remarkable track is "Badlands," featured eight tracks in. It is immensely fast-paced and must offer a profound effect in the game due to the chaotic image presented by its persistent beats and ever-building textures. Unlike generic techno, however, it also works well on a stand-alone basis and this is mostly due to the immense contrasts provided throughout, what with superb voice samples being featured and several ominous sections also appearing. It never grows repetitious due to this feature and this ensures it can be deservedly described as a multifaceted masterpiece. It is often these extremely fast-paced tracks that shine the most, with "Thermosphere," "Impatience," and "Bloody Battle" being particularly strong. "Thermosphere" is especially interesting, as it integrates a piano solo above the rampant techno lines beneath to create a surprisingly dreamy effect, while the final boss theme "Bloody Battle" succeeds in being a fine arrangement of "Badlands," which is made to sound more intense due to the use of prominent ascending portamentos in the introductory passages. "Warning" and "Madness," two tracks based around the same aggressive bass riff, also achieve a similar effect, though rely on hard-edged motifs much more, creating more of a sense of tension than vivaciousness. These themes reflect a slight flaw in the soundtrack in that harmonic material is often recycled between tracks throughout. Fortunately, Fukui mostly avoids blatancy when doing this by employing all sorts of subtle variation techniques, though "Beginning," a piece that abruptly recapitulates "Capital" and "Badlands" straight after each other, ends up being a disappointing final track for this reason, though the ethnically-influenced gem "Metempsychosis" and the slightly jazzy "Earthlight" assure an otherwise uplifting conclusion.

One of the great strengths of the soundtrack is that a variety of techno subgenres are also featured, as well as influences from other areas. "Machine Beat" is the best early example of this, as it combines both industrial ambience and progressive house music into one, with the transition between the two genres represented by a descending synth portamento at the 0:45 mark. Both sections are very effective, with the eerie sound effects of the first section providing a firm contrast to the ever-building electronic beats in the second. "Breakthrough" and "Factory" exemplify the contrasts between these two genres, as both use similar harmonic ideas, yet the former is moody, ambient, and largely acoustic-based, whereas the latter features penetrating bass riffs and a much more aggressive sound; however, both themes build-up, just like progressive house pieces should do. As for other ambient tracks, "Dawn" is one of the softer pieces featured, with its dreamy melody being effectively accompanied by a soft electronic bass riff, while "Afterimage" creates a surreal effect by using a colourful and continually manipulated descant as the main source of interest before the textures thin and a gorgeous melody emerges. Some of the tracks that integrate vocals add a particularly intense contrast. "Zero Gravity," for example, eventually integrates some awesome operatic vocal melodies after much slow atmospheric development, while dark ambient music appropriately follows a woman's voice declaring 'You are committing a major act of treason' in the chilling "Rebellion." The boss theme "Shudder" takes this vocal use one step further, featuring about 35 seconds worth of a person rapping lines at such a furious pace that most words are unintelligible. This adds a whole new dimension to an already accomplished theme, keeping everything extremely buoyant.

As well as the aforementioned "Beginning," this soundtrack does have a few other problematic tracks, but they're never unpleasant to listen to, merely a little disappointing. The main problem synonymous with the tracks is their length, as only about a third of them exceed two minutes and often could be developed a little more. This essentially makes some tracks disappointing and even occasionally detracts from the energy of the score. Such an effect becomes clear just five tracks in with "Ruins" and "Chase." The former is one of the more experimental tracks that features some an odd riff whereby every note is slightly offbeat, while its successor is a typical techno track that is quite addictive thanks to its enticing bass line. While each therefore has their individual merits, the fact neither exceeds the 1:40 mark results in the score feeling abrupt at that point, detracting from the effects of "Street" and "Machine Beat," the two strong tracks they're sandwiched between. Some tracks completely fail due to underdevelopment, including "Silence" and "Judgement," two potentially excellent progressive ambient tracks that simply grow too repetitive, as well as "Advent," "Muddle," and "Moonlight," the three shortest tracks on the album that offer absolutely nothing to the score. Despite a few exceptions, though, the feeling of disappointment generated from such tracks is only slight, and, in many cases, these failings are completely forgivable in that some of these tracks needed to be brief to suit their in-game contexts.

Scores to shooters are almost always invigorating, yet many fail on a stand-alone basis due to lack of harmonic variety, too much stylistic consistency, or as a result of few memorable themes being featured. At first glance, one might feel that this is the case with Einhänder's score, but familiarity will prove this to be a rash and inaccurate judgement. As previously discussed, most of the harmonic material used is greatly inspired, and any replication of harmonic material from previous themes is mostly effectively disguised. Stylistic consistency is not a problem either; though integrating a techno style into a Square score is inspired and reflects the increased capacity of its sound team, integrating a variety of other genres and subgenres, from progressive house and dark ambient to operatic and even rap, is even more inspired, as this adds diversity and ensures the predominant techno style remains a fascinating and effectual feature. As for memorability, this soundtrack largely succeeds as well; "Badlands," "Thermosphere," "Earthlight," and even "Capital" are not easily forgotten, and, though it is hard to whistle along to the music, this doesn't mean the themes are poor, merely extremely complex. Indeed, Kenichiro Fukui has single-handedly avoided all these pitfalls successfully, and the way it works with both immense power and intricacy within the game makes his effort even more respectable. So long as one has some affinity to electronica and is prepared to shell out some money on eBay, this is an imperative purchase.

When you think of Square and their music, you usually think about classical pieces. A light flute rolling off a grassy hill as a child relaxes in the crisp, summer air. The powerful trumpet blast as the enemy storms into town, destroying everything in it's path. Somber, sweet piano keys played in the backdrop of a touching scene. These are the sounds that usually saturates a Square soundtrack. Not this one...

Not synths layered over synths ripping through an intensive drumbeat. But that's what you get when listening to the Einhänder Original Soundtrack. It's a beautiful piece of Techno wonder that still hasn't been reached in other Techno ventures, whether it be video game inspired music or "official" store brought albums. All the tracks are courtesy of Kenichiro Fukui.

"Factory" is one of those powerful Techno imbued tracks that hits you with layered over standard breaks, nice work with the synths, and various hits on the electric guitar. "Madness" throws you in a bit of a confused organized frenzy as the beat comes in on the somewhat offbeat synth and thrust you into a still jagged melody.

"Dawn" is one of the more softer pieces that uses quiet quips of synth notches here and there. The bass line is soft as well and accompanies the main melody nicely. And "Shudder." What a wonderful song. It starts off with the hi hats being played very rapidly as the main melody begins to pan out and then, it hits you with all it's got. One of the better points of this piece has to be the rap displayed at the end. Though you can't really hear what he's saying, at least it sounds good.

So many hits on a Techno soundtrack are very hard to come across, but Kenchiro Fukui does it splendidly. It's a very solid soundtrack that does this very different game wonders beyond what anyone could ever hope for. One of the greatest Techno soundtracks ever.