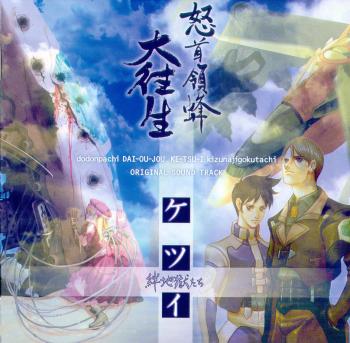 The DoDonPachi and ESP series are the main components of Cave's growing collection of frenzied vertical-scrolling shooters. The company generally rules the Arcade when it comes to pattern memorisation and battles against bugs. A gamer's generally ill-fated destiny is determined by reaction times and manoeuvring skills, which need to be unbelievably good to beat the games. Almost consistently accompanied by music that greatly intensifies the games, Basiscape's Manabu Namiki, Cave's internal music team, and Super Sweep's Shinji Hosoe are three of the main forces that are responsible for this crucial area. This particular album, dedicated to the more recent instalments to the DoDonPachi series, features Namiki's original scores for both Ketsui - Cutting the Bonds of Hell and DoDonPachi Dai-Ou-Jou, and demonstrates more of the talent of the mastermind behind Battle Garegga and Mushihimesama. Enhanced by three arranged tracks from Masaharu Iwata, Shizuyoshi Okamura, and Hitoshi Sakimoto for Ketsui, those wishing for Dai-Ou-Jou remixes have come to the wrong place; try DoDonPachi Dai-Ou-Jou & ESPGaluda Perfect Remix instead! Now let's see what all the fuss is about...

Namiki's distinct electronic style is fused with a variety of electronica subgenres across all three sections of the album. The Ketsui original section is, like Namiki's other shooters, highly notable for its stage themes. The first stage theme "Interception - Town in Upheaval," for example, is mystical and powerful; initiating with an airy chime melody, a sense of escalation and wonder is created as the gamer rapidly ascends to meet all sorts of interesting foes, enhanced by a wonderfully catchy drum beat. Namiki flaunts a crazy drum line in the majority of his tracks and this force is integral to filling his compositions with life and atmosphere. Indeed, mood is variable and integral to this section of the album. This is exemplified by how the ambient nature of "Suburb - Armored Green" provides a profound contrast to the aggressive electric guitar track "Defensive Line - Lurking in the Darkness". The most unique track is "Canal Fleet - Twilight Armada," melodic ecstasy thanks to its extremely captivating array of synth polyphonies and warped background noises, though it is limited by lack of development. Perhaps the best stage theme from the Ketsui section is "Evac Industry - Day of Judgment," which is developed wonderfully. Many of these tracks superbly integrate fragments of the Ketsui main theme, a colourful and frenetic melody introduced in the select theme "Doomsday".

In contrast, the DoDonPachi Dai-Ou-Jou themes have less emphasis on drum beats, explore a more limited range of atmospheres, and utilise a different main theme, introduced in "Fog Warning". Contrast Dai-Ou-Jou's "East Asia" with Ketsui's "Interception" and it's clear that the former is more melodically dependent, featuring great use of synth vocals and sound effects. Looking back at the stage theme contrasts in Ketsui and the score for Dai-Ou-Jou feels much more consistent, mostly creating a sense of buoyancy rather than anything moody, ethereal, or aggressive. An exception is the fourth stage theme "Mixed Melody," which initially feels hard-edged and violent with its overdriven guitar riffs and percussion cross-rhythms, though soon resolves and becomes comparatively light. Like Ketsui, the best stage theme is the final one, "Grieving Womb". It suitably provides a huge amount of atmosphere with its ambient introduction before undergoing a metamorphosis as electronic elements take over to become an intense, well-driven, and complex theme that is consistent stylistically with the rest of the soundtrack yet altogether more climactic. The integration of the main theme in its middle portion gives it direction before it moves into an oppressive section featuringtechno layering similar to what preceded. Collectively, the stage themes are simply excellent.

Like Battle Garegga, Namiki doesn't succeed as admirably with the boss themes as he does the stage themes, utilising the same techniques throughout to the extent that they are collectively a little disappointing. Both Ketsui's regular boss theme, "Darkened," and Dai-Ou-Jou's "Burning Body" are based on extremely fast-paced drum rhythms and a series of rockin' guitar lines; they give off a very similar aura and, although this is appropriate and there is melodic contrast, it does feel a tad formulaic. The final battle themes of both scores are also composed in a similar style; "No Remorse" is just as fast-paced as the earlier battle tracks, but features a more consistent harmonic line, just like the slightly less melodic "Red Bee". The true stand out of the boss themes is "Yellow Stream" from Dai-Ou-Jou. This theme has a really well-thought out bass line and a great melody for it to fight along with. Namiki produces a feeling of tension here through a variety of means: repetition of a number of synth ostinatos, domination of lower octaves throughout, utilisation of copious amounts of dissonance, and the integration of oppressive drum beats and percussive effects. En masse, Namiki's lack of variation in this section may disappoint when each part is listened to simultaneously, but if only one score is heard, then there is enough variation from him to make each theme sound original.

Namiki's Basiscape partners come together in the middle section of this album to arrange three tracks from the Ketsui - Cutting the Bonds of Hell section of the album. The first arrangement is Masaharu Iwata's "Interception - Disposable Squad". Initially featuring just a monophonic electronic line made intriguing by unpredictable rhythms, it soon develops into a mesmerising sea of vivid electronica; though the melody remains largely consistent throughout over the four minutes it plays — a charming variation of the main theme — it is greatly enhanced by adrenaline-pumping drum beats and basslines. A lot more can be said about Hitoshi Sakimoto's arrangement, "Evac Industry - Hells Tiers," which develops in a more satisfying way than any other contribution to the album; featuring the main theme in places, Sakimoto's take on it is subtle and the overall arrangement emphasises synth use throughout, yet feels more restrained and introduces electro-acoustic elements reminiscent of the scores to Gradius V and Soukugurentai. "Suburb - Taxidi Sta Outopias" is another impressive arrangement, though contrasts considerably with the overall feel of the soundtrack. Shizuyoshi Okamura takes a fairly cheesy take on the melody, using distorted electronic instruments to lead the main melody before light percussive synth takes over. Taking a Drum 'n' Bass feel initially, it's rather more thin and transparent than something Namiki would create and is essentially something one either loves or hates.

Namiki creates two memorable, colourful, and vibrant scores that effectively accompany two intense shooters while retaining a huge amount of stylistic originality. Though some use the rhythm of the music to determine their movements, others find it a distraction, so Namiki may need to work on achieving the perfect equilibrium between creating an exciting score and enhancing gameplay for all, yet mostly succeeds. The album is a select taste and most RPG music fans won't enjoy it, but those who enjoyed the samples, found what was described in this review appealing, or have enjoyed a Cave score before should seriously consider this amazing electronic album. All in all, this is a successful, profound, and consistent album that leaves the listener with very little to criticise.

As has often been pointed out among fans, Manabu Namiki officially confirms the tracks of DoDonPachi Dai Ou Jou were basically named after the shooter video game developers he wanted to show respect for. No individual company name is explicitly mentioned, but it's possible to attribute tracks as follows.