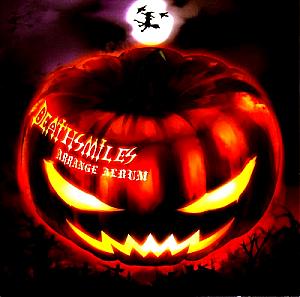 In May 2010, Yuji Takenouchi's alliance of video game composers GE-ON-DAN united to create their second arranged album. It was surprisingly dedicated to a game that had previously been subject to an arranged album, Death Smiles. In addition, the arrangers were completely liberated to offer what they wanted on the arranged album — so long as it was good and creative — despite the original score being a gothic rock one in the first place. The resultant production is unsurprisingly troublesome as a whole and left me feeling alienated for weeks. However, it also offers some of the most fascinating and spectacular arrangements ever to hit the game music community...

One of the most interesting features of the arranged album is how the arrangers assert their individuality, rather than customise their musicality to fit the original gothic rock pieces. The first stage theme, "Burning Halloween Town", for instance, now sounds like a Kenji Ito composition rather than a standard techno remix. The artist's interpretation of the melody is filled with his characteristic lyricism and the various frills in the countermelodies and accompaniment also scream 'Ito'. The arrangement isn't the most complex in the world and also pales considerably to others in terms of instrumentation, but this doesn't matter too much, as it is still immensely enjoyable. Feeling creatively liberated, Hiroki Kikuta doesn't hesitate to have fun either and magnificently transforms the gritty rock piece "Gravekeeper's Anger" into a jubilant jazz jam. Expect dense drum kit beats, enigmatic double bass solos, and an absolutely infectious piano riff... It's highly creative and, what's more, irresistibly catchy.

The free-for-all approach on this album is largely advantageous in terms of increasing the creativity and diversity of the album. However, it will be troublesome for those looking for an arranged album that comes together to form a cohesive retelling of the game's story and score, like Manabu Namiki's Premium Arrange Album before it. The majority of the artists on the album were able to arrange and implement their contributions in a high quality way, so the album is at least of consistently good quality, though a few contributions considerably let down the album. Kota Takahashi's opener surprisingly suffers multiple problems, including clunky guitar riffs, poor string synthesis, and a repetitive focus, leaving listeners unsure what to expect from the quality of subsequent themes. Tsukasa Masuko's "Awakened Giant Beast" would be acceptable as a rocking anthem in a video game score, but lacks the individuality, ambition, and indeed development to fit in this arranged album.

Given its inconsistency in style and quality, this album is therefore one that is best to listen to for its highlights, not the overall experience. Thankfully, there are some truly spectacular offerings across the album. One of several tracks inspired by mainstream music, Akira Yamaoka offers his most interesting track since iFUTURELIST on "Crossing the Ravine...", dominated by distorted electronic beats and dance vocal samples. Once a secret member of GE-ON-DAN, Yuzo Koshiro also offers something different with "Memories of the Ruined Crystal Temple" — blending Japanese vocals with funk instrumentals to sublime, perhaps even sexy, effect. My personal favourite on the entire album, "Hades Castle" seems to perfectly reconcile the nature of the original piece with Noriyuki Iwadare's own musicality. Inspired by glam rock, the electric guitar work is wild and extravagant, punctuated by gothic sound effects and punchy synth parts. The finale of the arrangement from 4:02 offers the biggest 'feel good' moment on the entire album.

Several arrangements on this diverse album take a more highbrow approach. Ryu Umemoto, for instance, transforms the brief stage clear into an epic orchestration. The bombastic Sakuraba-esque introduction is sure to inspire attention and the emotional climax of the theme — featuring a gorgeous soprano solo and dazzling harp arpeggios — is bound to inspire some tears. Kenichiro Fukui meanwhile takes a giant journey with his six minute techno mix of "Trembling Mad..." and at last develops the style he offered on Einhänder; the track is extremely impressive for the amount of energy, variety, and fluidity it offers throughout, contrasting wonderfully from the stereotypical techno arrangements out there. Erika Imura's "Waltz for the Aristocrat Ghosts" is much more subtle, treated mainly as a neo-classical waltz on solo piano. Though initially a translation of the original music, the new section from the 1:22 mark is astonishingly beautiful and TECHNOuchi's impressionistic synth overlays enhances its artistry.

There are also several spectacular ambient arrangements on the disc. Soyo Oka creates some beautiful soundscapes on "Lost Forest" by blending organic focuses with more unusual ones. The final sound considerably differs from anything I've ever heard and inspires such intense, abstract, and satisfying imagery. "The Witch of the Bottomless Swamp" will be more familiar for those used to the dense orchestral sound Junya Nakano developed for the battle themes on Final Fantasy X. Although one of the least accessible entries on the disc, many listeners will love to immerse themselves in the web of interweaving strings and percussion polyrhythms featured here. And then there is "To the Wandering Beloved Souls", a surprisingly downbeat interpretation of the ending theme. Ippo Yamada's wailing electric guitars and moody drum beats resound during the culmination of the arrangement before the arranged section fades into a perplexing array of clock chimes...

The album doesn't quite end there. There are also two bonus compositions created by Ryu Takami for the Xbox 360's Death Smiles: Mega Black Label port. The menu theme is a stereotypical gothic track, blending resonant violin leads with synth chorus suspensions, harp arpeggios, and, of course, some organ counterpoint. It's rather simple in construction, but spectacular in its emotional effect and informs gamers to expect quite an aural and visual experience from Death Smiles... The second composition, seemingly used in a bonus stage, is more reminiscent of Manabu Namiki's approach to the original score. Listeners should expect bright synth melodies and electric guitar melodies to play out amidst a sea of energetic beats. The composition is certainly a welcome bonus and easily rivals some stage themes from the original Death Smiles.

This is an album where the individual tracks greatly exceed the collective experience. The album is a confusing whole, given its tremendous diversity, inconsistent quality, and abstract relation to the original material. Yet while disappointing as a concept and production, I found the album irresistable due to its individual arrangements. There is simply so many wonderful arrangements here that vary so much in the approaches they feature, emotions they evoke, and imagery they inspire, thanks to the artistry of most of the artists featured. The free-for-all approach to the album may not have enabled a cohesive whole, but it did liberate the arrangers to achieve the great heights they did. Thus, the album is still a great success overall and highly recommended for most.

Album was composed by Манабу Намики / Ryu Takami and was released on May 15, 2010. Soundtrack consists of 16 tracks tracks with duration over more than hour. Album was released by Cave.