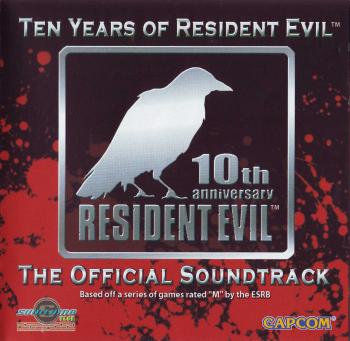 The disc opens with a selection of tracks from the Resident Evil remake's greatly enhanced score. The tracks selected reflect Shusaku Uchiyama and Misao Senbongi's focus on textural ambience for the soundtrack and certainly create a chilling atmosphere within the mansion and surrounding areas. Especially effective are the full length "Narrow and Close" and "The Depth" tracks that serve as a prelude to what is to come in the Resident Evil 4 selection at the end of the disc. However, much of the track selection leaves much to be desired since most of the tracks selected are short ones and rather similar in composition. Sure, there are action tracks like "Neptune", "New Threat", and "Tyrant, Pt. 1", but their short lengths make them more abrupt interruptions in an incoherent selection. Why did the producers not select more substantial themes like "Prologue" or "Lost in Darkness" to give the start of the album more definition and intrigue? Why were more familiar suspense tracks like "Vacant Flat" and mesmerising interludes like "Save Theme" discluded in favour of noise music? The selection here neither offers an appealing start to the album nor does the remake's soundtrack justice.

The selection from Masami Ueda's Resident Evil 2 is a mixed experience. The short track "The Evil Eye" seems superfluous since the subsequent "Raccoon City" does such a good job introducing the orchestral textures and memorable main theme of the soundtrack. The police station's "The Front Hall" is partly comforting with its use of elegant piano work, but the fragments of the main theme and unpredictable development provides an ominous feeling throughout the track. It's also pleasing that "The Basement of Police Station" made it here since its dark and alien soundscapes represent an excellent transition towards the more industrial-oriented side of the score. Sadly, no subsequent setting themes are included. Classics such as The Marshalling Yard themes are omitted in favour of action tracks like "T-A", "The Second Malformation of G", and even "Maximise Your Survival Instinct". It's almost as if Sumthing Else are trying to portray Resident Evil 2's score as an action score when atmosphere is its main draw yet they perhaps tease listeners to purchase the full soundtrack by not including the climactic operatic final boss theme. At least the spectacular rendition of the main theme in "Escape from Laboratory" is still included.

Continuing the trend, Resident Evil 3's selection is introduced by a short if memorable title theme that isn't really representative of the soundtrack as a whole. However, "Her Determination" goes some way to reflecting the very different tone of the sound — it is quite a reflective theme that reflects upon Jill's despair and also exposes a stern militaristic rhythm that serves to testify Raccoon City's atomic fate throughout the game. However, the wider exploration of the gloom of Raccoon City isn't really achieved since crucial setting themes like "The City of Ruin" and "The City Without Hope" are omitted. The only setting theme to make it is "The Hospital" but at least it testifies to Masami Ueda's ability to produce atmospheric stylistic fusions. The remaining tracks once again create the illusion of a subpar action score, such as the tremolo strings suspense theme "Feel the Tense..." and the ridiculous electronically pulsating "Nemesis' Theme" for the main villain. Other additions are the short and random music box theme used for correctly solving a puzzle and the brief and bittersweet track for representing Raccoon City's destruction. While Resident Evil 3's score had problems, this especially weak selection does it no favours.

The Resident Evil: Code Veronica selection plays to the melodic strengths of the score. "Piano Roll" is a nostalgic interpretation of the pretty yet disturbing theme to reflect Alexia and Alfred's relationship. "Lachrymal" provides an emotional piano-based track that partly compensates for the omissions of all the calming and heartrending cues from the previous scores. Although a few great atmospheric themes were omitted, "The Suspended Doll" and "Deja Vu" make welcome additions. The former is dominated by obsessive repetition of short piano and organ fragments that depict Alfred and Alexia's playful menace on the eerie journey to their mansion. It's rounded off by morose string countermelodies, sporadic thunderous roars, and dabs of Alexia's increasingly significant theme. "Murderous Eyes" accompanies the transformation of Alexia as the soundtrack approaches its spectacular aforementioned climax; she is portrayed as a divine, sexual, but ultimately malevolent being with a dazzling combination of choir and organ. "The Theme of Nosferatu" and "Theme of Alexia Type 2" round off the selection with some excellent action themes here. There is one bad choice though. The jarring panic theme "Incoming" in fact opens the selection even though it is probably the worst track on the entire soundtrack.

The selection from Resident Evil 0 lasts less than nine minutes, but then again its soundtrack was filled with shockingly short tracks. The setting themes blend inspirations from the Resident Evil and Resident Evil 2 soundtracks to good effect. "Training Facility Main Theme" creates a very gloomy atmosphere by blending all sorts of transient treble elements with an obsessed repeating bass line. "Dormitory ~ Chapel" creates an even more hollow and eerie atmosphere with dark texturing and suspended strings, although the "Chapel Main Theme" would have been more welcome. Once again, a selection of dissatisfying action tracks are included. "Leechman-1" is little more than some fast-paced string runs and the occasional percussive thud while "Chess" is a rhythmically driven theme with a dissatisfying underdeveloped upper portion. However, this selection does include some of the most emotionally affecting entries on the score. "Lullaby, Pt. 2" blend choral and organ work to give a grand, celestial, yet unsettling image. "Zero Ver. 2" is a violin solo with piano accompaniment that is sure to appeal to the masses. However, its short length is even more tragic than its sorrowful melody. Finally the two "Lament" tracks are Chopin-inspired waltzes that, while well done, are less than 20 seconds each.

The album is rounded by a selection from Resident Evil 4. This selection has no flawed tracks, but the omission of the cerebral setting themes used in the darkness side is unfortunate. It also completely breaks the continuity with the Resident Evil remake soundtrack. The selection is nicely introduced with "The Drive"; it's fantastic how this piece changes from a passionate flamenco into a menacing orchestral soundscape as Leon becomes aware of the funny goings on in Spain. Once again, though, the focus tends to be on action themes. Listeners can relive how the music of "El Gigante" emulates the footsteps of this clumsy giant or how the eerie reverberations of "Ganado IV" portray brainwashed religious fanatics. However, why effective but unimportant material like "Regenerador" made it instead of classics like "A Ruined Village", "Echo in the Night", and "Infiltration" is beyond me. It's pretty good how Sumthing Else preserved most of the final action suite with "Krauser" and "Final Battle" even if the trademark militaristic anthem of the game was once again omitted. The enigmatic end credits theme is also present in its full form in "Sorrow". It gives closure to the disc while hinting that the Resident Evil experience is far from over... or should that be the musical experience is far from complete?

It would have been practically impossible for Sumthing Else to compile material from all six main Resident Evil scores into one disc without disappointing somebody. However, they seem to have almost produced a random selection of tracks here rather than select the most significant or popular themes from the series. Though all six track selections have good tracks, most are cluttered by short superfluous pieces or jarring action themes rather than the perplexing atmospheric themes that provide the most interesting feature of Resident Evil scores. Even more disappointing is that the track selection doesn't properly represent the musical experience of Resident Evil. It seems too action-focused overall while missing the atmospheric and emotional focus. The content of individual scores like Resident Evil's remake, Resident Evil 3, and Resident Evil 4 doesn't testify to their uniqueness and diversity either. Maybe the intention was to create a slightly starved track selection while exposing a little bit of each score so that listeners will be encouraged to buy the full soundtracks. However, even in this goal, Sumthing Else haven't really satisfied despite having quite a few amazing scores to work with. Just take my word for it and stick to the full domestic or import soundtracks instead.